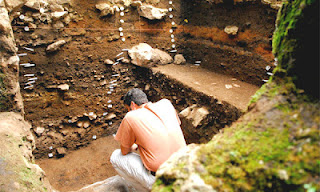 The only thing that exploded ten thousand years ago was the population as it responded to the conversion to agriculture. This also brought fixed communal living and the inevitable accumulation of pottery wherever it was possible. Recall though that the alternative was wood which was just as handy if not more so. Unsurprisingly the evidence of pottery cultures appear generally were carvable wood resources would have soon been eliminated. Thus by inference, huge agricultural populations could well have thrived using wood alone. That is certainly the evidence of the Amazon and other wood rich locales.

Leaving that aside, and it deserves serious thought and consideration, let us address the antiquity of clay firing. Quite obviously the technology did not need a village to emerge at all. What was needed was a need and votive figurines are certainly such a need. Working with clay was part and parcel of any primitive life-way simply because clay could be shaped and better clay could be selected and worked with.

Thus the fire setting step was as natural as placing such shaped objects by the fire to dry it out and really going from there. In time this would naturally evolve into a kiln protocol and from there it is not hard to expect higher temperatures and outright glazing. Experimentation is easy and once a practical use was identified, inevitable.

The key point though is that a lot could be done by small groups relying on hunting. It was just that they were unlikely to carry much with them. 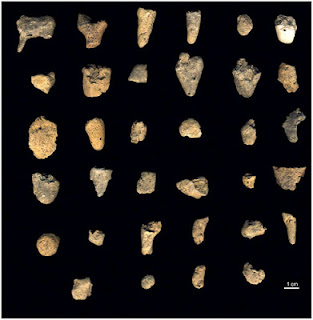 We know them best for their stone tools and intrepid mammoth hunting. But new discoveries in Croatia suggest that ice age humans made evocative ceramic art far more regularly than once believed.
Thirty-six fragments of fired clay, excavated in the Vela Spila cave on an island off the Adriatic coast, make up the second-largest collection found so far of the earliest human experiments with ceramic art. They are 15,000 to 17,500 years old — the first European evidence of ceramic art after the ice sheets stopped spreading.


The oldest and largest collection, made about 30,000 years ago and found in the Czech Republic, includes a famously corpulent nude figurine known as the Venus of Dolni Vestonice. Apart from that, little fired ceramic art remains from the time before the explosion of ceramic pot-making 10,000 years ago, after the ice sheets retreated and early humans settled down to farm.


That led paleontologists to believe that ceramic art was uncommon among the highly mobile people of the ice age. But Rebecca Farbstein, the University of Cambridge archaeologist who described the Croatian collection in a recent paper in the journal PLoS One, said the work was not so unusual after all.

“The history of ceramic technology is longer and more diverse than we originally thought,” she said.


The most lifelike piece found at Vela Spila (the term is Croatian for big cave) is the tiny dark brown torso and foreleg of an animal, possibly a horse or deer, complete with a smooth, anatomically correct hole in its rear. But when the piece was uncovered in 2001, the team stuffed it into a bag without identification.

“It was overlooked because no one expected to find ceramics in the Paleolithic,” Dr. Farbstein said.

Five years later, someone looked in the bag and realized what the figure was. When scientists went back to the cave that year to excavate further, they found the other 35 ceramic art pieces.


Olga Soffer, an emerita professor of anthropology at the University of Illinois who has worked on the Czech ceramics, said the find reinforced the idea that ceramic work — a major, complex technological breakthrough in human history — was invented for art rather than utility.


In turn, that helps flesh out the modern understanding of how early human minds worked: more metaphor, less blood.


“Life was lived by more than stone spear point,” Dr. Soffer said. “It gets us away from the Hemingway, mega-macho male stuff.”

Dr. Farbstein said her analysis of the Vela Spila findings suggested that the inhabitants of the cave independently developed their own form of ceramic art more than 10,000 years after the Czech invention.

The excavation revealed that ceramic art in the cave lasted for two and a half millenniums before vanishing from the archaeological record, only to reappear 8,000 years later. A handful of other sites nearby from the same ice age era are devoid of ceramics.


There are similarities between the Czech and Croatian ceramics. In each case the figurines’ limbs are made by pinching each pair together to form a single appendage, as if the legs or arms are glued together. One of the Croatian figurines is covered with bands of incisions, and the artist has etched a line between the joined back legs to represent two legs, as seen in some Czech pieces.


Tantalizingly, several of the Croatian pieces feature the imprint of a finger, perhaps left there when the artist tried to smooth wet clay. Again, some Czech pieces, including the Venus, have similar marks.


Other archaeologists who study the same period are unconvinced that the Vela Spila ceramics were a brand-new invention. Jiri Svoboda of the Institute of Archaeology of the Academy of Sciences of the Czech Republic, Brno, says it is also plausible that the Croatian artists learned from the Czechs.


“It seems that these people were doing very similar things, but 10,000 to 15,000 years later,” he said from his excavation site at Dolni Vestonice, adding, “I would vote personally for continuity.”


Dr. Soffer said it was possible that ceramic artworks were made in many places but not fired — or that the firing was not hot enough, so the ceramics were destroyed by time. She said finding out where the Croatian figurines’ clay originated may help answer some questions.


The archaeological record is silent so far on a question that teases the imagination: What were the ceramics for? Could they have been as mobile as their makers, perhaps carried as tokens in the clothing of those hairy mammoth hunters?