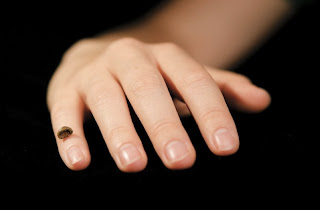 There is nothing more important in DNA research than determining those aspects of the human DNA that is truly unique to ourselves. This allows our research focus to be targeted while those aspects shared can be as readily studied in other species.

Stunningly we have achieved an almost complete genome for this unique specimen. We are also been shown a new technology that will surely be readily applied to a whole range of fossil DNA. What this surely means is that a complete genome of the Mammoth will be achievable and even perhaps that of the truly ancient fossils we are working with. Jurassic Park has just become less impossible.

Knowing the code it is reasonable to replicate the code in a suitable donor egg and generate a living specimen. Thus this is an extremely important innovation and breakthrough. I also have little doubt that we will soon see the Neanderthal DNA developed to the same level using the same method.

In a stunning technical feat, an international team of scientists has sequenced the genome of an archaic Siberian girl 31 times over, using a new method that amplifies single strands of DNA. The sequencing is so complete that researchers have as sharp a picture of this ancient genome as they would of a living person’s, revealing, for example that the girl had brown eyes, hair, and skin. “No one thought we would have an archaic human genome of such quality,” says Matthias Meyer, a postdoc at the Max Planck Institute for Evolutionary Anthropology in Leipzig, Germany. “Everyone was shocked by the counts. That includes me.”

That precision allows the team to compare the nuclear genome of this girl, who lived in Siberia’s Denisova Cave more than 50,000 years ago, directly to the genomes of living people, producing a “near-complete” catalog of the small number of genetic changes that make us different from the Denisovans, who were close relatives of Neandertals. “This is the genetic recipe for being a modern human,” says team leader Svante Pääbo, a paleogeneticist at the institute.

Ironically, this high-resolution genome means that the Denisovans, who are represented in the fossil record by only one tiny finger bone and two teeth, are much better known genetically than any other ancient human — including Neandertals, of which there are hundreds of specimens. The team confirms that the Denisovans interbred with the ancestors of some living humans and found that Denisovans had little genetic diversity, suggesting that their small population waned further as populations of modern humans expanded. “Meyer and the consortium have set up the field of ancient DNA to be revolutionized — again,” says Beth Shapiro, an evolutionary biologist at the University of California, Santa Cruz, who was not part of the team. Evolutionary geneticist Sarah Tishkoff of the University of Pennsylvania agrees: “It’s really going to move the field forward.”

Pääbo’s group first gave the field a jolt in May 2010 by reporting a low-coverage sequence (1.3 copies on average) of the composite nuclear genome from three Neandertals. They found that 1 percent to 4 percent of the DNA of Europeans and Asians, but not of Africans, was shared with Neandertals and concluded that modern humans interbred with Neandertals at low levels.

Just 7 months later, the same group published 1.9 copies on average of a nuclear genome from a girl’s pinky finger bone from Denisova Cave. They found she was neither a Neandertal nor a modern human — although bones of both species had been found in the cave — but a new lineage that they called Denisovan. The team found “Denisovan DNA” in some island Southeast Asians and concluded that their ancestors also interbred with the ancestors of Denisovans, probably in Asia.

But these genomes were too low quality to produce a reliable catalog of differences. Part of the problem was that ancient DNA is fragmentary, and most of it breaks down into single strands after it is extracted from bone.

Meyer’s breakthrough came in developing a method to start the sequencing process with single strands of DNA instead of double strands, as is usually done. By binding special molecules to the ends of a single strand, the ancient DNA was held in place while enzymes copied its sequence. The result was a sixfold to 22-fold increase in the amount of Denisovan DNA sequenced from a meager 10-milligram sample from the girl’s finger. The team was able to cover 99.9 percent of the mappable nucleotide positions in the genome at least once, and more than 92 percent of the sites at least 20 times, which is considered a benchmark for identifying sites reliably. About half of the 31 copies came from the girl’s mother and half from her father, producing a genome “of equivalent quality to a recent human genome,” says paleoanthropologist John Hawks of the University of Wisconsin, Madison, who was not part of the team.

Now, the view of the ancient genome is so clear that Meyer and his colleagues were able to detect for the first time that Denisovans, like modern humans, had 23 pairs of chromosomes, rather than 24 pairs, as in chimpanzees. By aligning the Denisovan genome with that of the reference human genome and counting mutations, the team calculated that the Denisovan and modern human populations finally split between 170,000 and 700,000 years ago.

The researchers also estimated ancient Denisovan population sizes by using methods to estimate the age of various gene lineages and the amount of difference between the chromosomes the girl inherited from her mother and father. They found that Denisovan genetic diversity, already low, shrank even more 400,000 years ago, reflecting small populations at that time. By contrast, our ancestors’ population apparently doubled before their exodus from Africa.

The team also counted the differences between Denisovans and chimps, and found that they have fewer differences than do modern people and chimps. The girl’s lineage had less time to accumulate mutations, and the “missing evolution” suggests she died about 80,000 years ago, although the date is tentative, says co-author David Reich, a population geneticist at Harvard University. If this date — the first proof that a fossil can be directly dated from its genome — holds up, it is considerably older than the very rough dates of 30,000 to more than 50,000 years for the layer of sediment where the fossils of Denisovans, Neandertals, and modern humans all were found.

The team says the new genome confirms their previous findings, showing that about 3 percent of the genomes of living people in Papua New Guinea come from Denisovans, while the Han and Dai on mainland China have only a trace of Denisovan DNA. Furthermore, the team determined that Papuans have more Denisovan DNA on their autosomes, inherited equally often from both parents, than on their X chromosomes, inherited twice as often from the mother. This curious pattern suggests several possible scenarios, including that male Denisovans interbred with female modern humans, or that these unions were genetically incompatible, with natural selection weeding out some of the X chromosomes, Reich says.
\
The new genome also suggests one odd result. By using the detailed Denisovan genome to sharpen the view of their close cousins the Neandertals, the team concludes that living East Asians have more Neandertal DNA than Europeans have. But most Neandertal fossils are from Europe; Paleoanthropologist Richard Klein of Stanford University in Palo Alto, California, calls the result “peculiar.”

Most exciting to Pääbo is the “nearly complete catalog” of differences in genes between the groups. This includes 111,812 single nucleotides that changed in modern humans in the past 100,000 years or so. Of those, eight were in genes associated with the wiring of the nervous system, including those involved in the growth of axons and dendrites and a gene implicated in autism. Pääbo is intrigued in particular by a change in a gene that is regulated by the so-called FOXP2 gene, implicated in speech disorders. It is “tempting to speculate that crucial aspects of synaptic transmission may have changed in modern humans,” the team wrote. Thirty-four genes are associated with disease in humans. The list suggests some obvious candidates for gene-expression studies. “The cool thing is that it isn’t an astronomically large list,” Pääbo says. “Our group and others will probably be able to analyze most of them in the next decade or two.”

Back in Leipzig, the mood is upbeat, as researchers pull fossil samples off the shelf to test anew with “Matthias’s method.” First on Pääbo’s list: Neandertal bone samples, to try to produce a Neandertal genome to rival that of the little Denisovan girl.
Posted by arclein at 12:00 AM