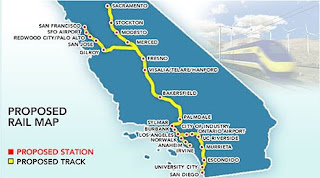 High speed rail has one huge advantage. It can and must travel between high density point to high density point.  It always takes political will to resolve conflicting claims on the land base that there will always be losers, at least for a time.  However the winners hugely outnumber those winners.

A proper high speed train can travel five hundred miles inside three hours to link into the local transit networks at either end.  Air traffic can can close but works far better for the longer hauls.

In the East, the natural corridor is Chicago, Detroit, Toronto, Montreal, Boston, New York and Washington with short branches to fit in and other interim stops as it matures.  It is a huge investment, but I do not seeing anyone in Europe complaining.

The other obvious link is San Francisco to Los Angelos.   This funding is a modest start and will perhaps set up the road bed but is otherwise from nowhere to nowhere.

Passenger rail, in contrast to freight, has been on a long-term decline in the US, even as high-speed rail networks in Europe, Japan, and China are in their second or third generation. California’s high-speed rail plan, though contested by opposing lawmakers, is a step in the right direction, proponents argue — one that will create infrastructure, jobs, and state revenues, as well as alleviate air and road congestion and reduce CO2 and greenhouse gas emissions.

Saved in the Nick of Time

“No economy can grow faster than its transportation network allows,” AP quoted a statement by U.S. Transportation Secretary Ray LaHood applauding the result of the state legislature’s vote. “With highways between California cities congested and airspace at a premium, Californians desperately need an alternative.”

The initial, 130-mile section of the “bullet train” network will link Madera and Bakersfield. Overall, the project envisions high-speed rail links between Los Angeles and San Francisco at a cost of $68 billion.

The “yes” vote comes in the nick of time, as an additional $3.2 billion of federal funding for the high-speed rail project was due to be taken off the table. California Governor Jerry Brown has been supporting the high-speed rail and other infrastructure projects, which he has said will help create jobs in a state with higher-than-average unemployment.

With California weighed down with a large budget deficit, state republicans were strident in their criticism, saying that the money could be used for other purposes, such as keeping schools open, and avoiding other budget cuts. Business leader members of the Bay Area Council, in contrast, cheered the “yes” vote.

State senate leader pro tem Darrell Steinberg of Sacramento likened the project to the building of the network of dams, reservoirs, and canals in the late 1950s that helped pave California’s growth path — a bill passed during the term of Gov. Brown’s father, then Gov. Pat Brown.

Passage of the bill also includes $1.9 billion of funding to improve regional rail networks. Included is a project to electrify the Caltrain San Jose-San Francisco commuter rail line, as well as making improvements to Metrolink commuter lines in Southern California.

“Not only will California be the first state in the nation to build a high-speed rail system to connect our urban centers, we will also modernize and improve rail systems at the local and regional level,” California High-Speed Rail Authority chairman Dan Richard was quoted as saying. The Authority is to manage the high-speed rail network project.

US lack of leadership on high-speed rail is worse than our lack of leadership on solar and wind power (we are way behind numerous other countries). But the area of the US with the best rail network at the moment, and with the best hope of developing a “high-speed” rail network, is the Northeast. With a little work, that could even spread down the East Coast. Andrew Meggison of Gas2 has an update for us on the progress of high-speed rail on the East Coast:

The news comes on the heels of word that progress is also being made on a plan to build a high-speed rail network in the Northeast.

Amid the financial chaos of the MBTA, some people in Massachusetts (MA) still want rail expansion, and high-speed rail at that. Three public meetings have been held on the issue and it seems that the people want it. The high speed rail would run from New Haven, CT, stop along the way to Hartford, and then make local stops all the way to Springfield, MA.

The high-speed rail project would increase the number of daily trains between New Haven CT and Hartford CT from 6 trains to 17 trains with the goal of running 25 trains each day along a 62 mile route. The 62 mile corridor between New Haven and Springfieldis owned and operated by The National Railroad Passenger Corporation (Amtrak).

If the high speed rail project gets approval later phases of the project would include new stations in North Haven, Newington, West Hartford and Enfield. Eventually, the high-speed rail line would encompass stops across all

America is behind most other first world nations in the high speed rail department. Arguably, the major efforts to get a high speed rail system in place in the US have been focused on California and the Central Valley project, despite a serious lack of money and an established ridership. Supporters of a high-speed rail system in California claim that the project will immediately create thousands of jobs and spur growth in businesses that directly and indirectly support the project, while those against the project ask how can we, as an economically bankrupt state, undertake a project like this in the current economy?

The fiscal strength of the New England states, however, is much stronger than than that of California, which faces a $16 billion budget deficit. As I already mentioned, the MBTA is facing a serious budget shortfall, though Connecticut recently closed its own budget deficit. Congress also recently approved the Northern New England corridor as one that could eventually support high-speed rail all the way from Boston to Montreal, Canada.

Furthermore, the New England corridor is the only one with an established, and profitable ridership. Record ridership levels have been recorded as gas prices go up, with public transit use across America rising to levels not seen since 1957. With multiple states and countries working on this high-speed rail project together, it might stand a better chance of coming to fruition that California’s bungled and expensive plans.

Andrew Meggison was born in the state of Maine and educated in Massachusetts. Andrew earned a Bachelor’s Degree in Government and International Relations from Clark University and a Master’s Degree in Political Science from Northeastern University. Being an Eagle Scout, Andrew has a passion for all things environmental. In his free time Andrew enjoys writing, exploring the great outdoors, a good film, and a creative cocktail. You can follow Andrew on Twitter @AndrewMeggison
Posted by arclein at 12:00 AM