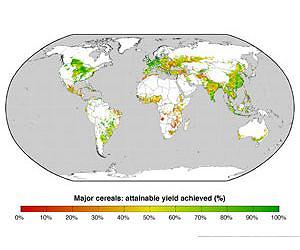 Fundamentally our own work here on this blog has clearly shown that it is possible to be input neutral whatever the productivity, mostly with biochar and accessing atmospheric water to avoid working with surface water if necessary. Bio-char is profoundly practical and only needs the will and that is coming. Atmospheric water takes progressive development but is doable now just for demonstration. Once achieved, every somewhat flat piece of dirt will produce heavily.

Solving those two problems opens up all tropical soils and all arid lands to agricultural usage. That alone is likely good enough for a ten fold increase in direct food production.

Yet just applying what we already do better is good enough to double our production. Since the globe is shifting nicely into modernism which can be pretty well completed by 2050, capital will also be readily available to support every idea here and a lot more.

In many parts of the world, particularly Eastern Europe, sub-Saharan Africa, East Asia, and South Asia, agricultural lands produce far less food than they could with good nutrient and water management.

http://www.seeddaily.com/reports/Study_offers_new_hope_for_increasing_global_food_production_reducing_environmental_impact_of_agriculture_999.html
Can we have enough to eat and a healthy environment, too? Yes-if we're smart about it, suggests a study published in Nature this week by a team of researchers from the University of Minnesota and McGill University in Montreal.

Global demand for food is expected to double by 2050 due to population growth and increased standards of living. To meet this demand, it is often assumed we will need to expand the environmental burden of agriculture. The paper, based on analysis of agricultural data gathered from around the world, offers hope that with more strategic use of fertilizer and water, we could not only dramatically boost global crop yield, but also reduce the adverse environmental impact of agriculture.

"We have often seen these two goals as a trade-off: We could either have more food, or a cleaner environment, not both," says lead author Nathaniel Mueller, a researcher with the University of Minnesota's Institute on the Environment and a doctoral student in the College of Food, Agricultural and Natural Resource Sciences. "This study shows that doesn't have to be the case."

Mueller and colleagues used management and yield data for 17 major crops to take a big-picture look at how much water and nutrients it would take to bring underperforming farmlands to meet their food production potential. They also looked for places where fertilizer use could be cut down without substantially reducing crop yield. They found:
We could boost production 45 to 70 percent for most crops. The greatest opportunities for yield improvement are found in Eastern Europe, sub-Saharan Africa, East Asia, and South Asia.

Worldwide, we could decrease nitrogen use 28 percent and phosphorus use 38 percent without adversely affecting yields for corn, wheat and rice. China stands out as a hot spot of nutrient overuse, but other areas, like the United States, Western Europe, and India, also have room to improve.

With strategic redistribution of nutrient inputs, we could bring underperforming lands worldwide to 75 percent of their production potential while only increasing global nitrogen use 9 percent and potassium use 34 percent-and reducing phosphorus use 2 percent.

The researchers caution that their analysis is at a coarse scale and that many other factors, including land characteristics, use of organic fertilizers, economics, geopolitics, water availability and climate change will influence actual gains in crop production and reductions in adverse environmental impacts.

Nevertheless, they are encouraged by the strong indication that closing the "yield gap" on underperforming lands-previously identified as one of five promising points for meeting future food needs, along with halting farmland expansion in the tropics, using agricultural inputs more strategically, shifting diets and reducing food waste-holds great promise for sustainably boosting food security.

"These results show that substantial gains are indeed possible from closing the yield gap-and combining these efforts with improved management of existing lands can potentially reduce agriculture's environmental impact," Mueller says. "They also offer concrete suggestions as to where and how we can focus future efforts.

This work should serve as a source of great encouragement and motivation for those working to feed the 9-billion-plus people anticipated to live on this planet in 2050 while protecting Earth's indispensible life support systems."

University of Minnesota
Farming Today - Suppliers and Technology
Posted by arclein at 12:00 AM