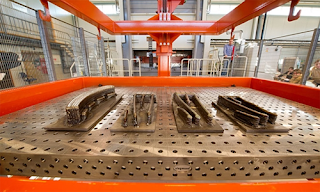 Without question, titanium needs new completely innovative fabrication technologies. All of its superb characteristics work wonderfully against successful machining and losses during machining which mostly consists of mucking out a piece anyway is typically common. Thus a system like this will have a ready market.

At least the metal is readily available and I am sure the day will come when we become much more adept at working with it.

I would like to see sheets of different elements produced that are one atom thick as a fabrication feed stock. We can now do it with carbon and a few others and I suspect that this will turn out to be a gold mine for producing complex alloys and oddly structured materials. For example let us imagine a laminated sheet of alternating layers of graphene and single atomic titanium or even several atom thick titanium. Is someone working on this problem?

In the meantime, we now can use an titanium extrusion to cast up forms and structures.

Norwegian titanium companies have been granted funding to develop a brand-new production technology, which may mark the beginning of a revolution in industry worth billions.

With funding from the User-driven Research based Innovation (BIA) programme at the Research Council of Norway, Norsk Titanium Components (NTiC) has developed an entirely new method of producing titanium components, making it cheaper and easier to capitalise on this material of tomorrow.

Titanium is a material that is in high demand in the oil and gas, aerospace and defence industries. Norway has large reserves of this raw material, but producing end-products made of titanium is currently both expensive and difficult.


The traditional method of producing components of titanium involves using forged plates, blocks or rods depending on the product specifications. These are then shaped into the desired components through machining.

First, machining can lead to as much as 70 per cent of the material being lost as waste. This loss is very costly, as titanium is more difficult to recycle than other materials and the price of titanium plates is NOK 1 000 per kilo.

Second, the production process is very lengthy. NTiC expects their new production technology to reduce delivery times by many months.

In addition, the company forecasts that material waste can be limited to 10-20 per cent and that their prices will be 30-50 per cent lower than those of their competitors. NTiC will also be able to produce titanium components of a much higher quality than what the industry can offer today.


The premium results are the outcome of a production technology developed entirely by NTiC. The basic method involves feeding wire-shaped pieces of titanium into a machine for smelting. But first specifications are entered into a computer program in the machine which determines the resulting shape of the components. The process produces components that can range from five centimetres to nearly two metres in length.

The process can be compared with making a pot by layering coils of clay on top of one another until the pot is finished. This also enables the creation of products in nearly final form.


The production method gives rise to hopes that new applications can be discovered for titanium – the metal of the future. If it proves successful, Norway could become a world leader in the production of both raw titanium and titanium components.

NTiC is working towards becoming a qualified supplier of components vital to the aerospace industry. Over 300 000 new airplanes will be built worldwide by 2030, so the qualification process is a big potential success factor for the company.

Titanium may also become a key raw material in one of the hottest innovations in the energy sector: wind turbines at sea. The properties of titanium are optimal for this purpose: it is as strong as steel, 45 per cent lighter and highly resistant to corrosion.