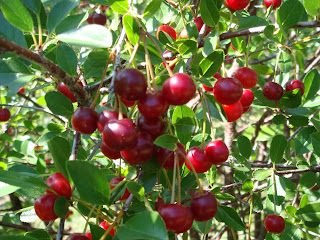 Last week I attended an anniversary for the town of Lestock in Saskatchewan North of Regina. The town is my wife's birth place. As I often do, I walked the back lanes to look at what was growing in the back yards. Many houses have been abandoned as rural populations have contracted over the past two generations.

What startled me was to see a mature sour cherry tree with a full load of well sized cherries. I had thought that this tree could not prosper here yet is was looking at a hundred weight of cherries nicely ripened at the end of august. It is worth mentioning that this part of Saskatchewan North of the Qu'appelle Valley is well watered country but with a shorter intense growing season. However cherries typically ripen elsewhere through the spring into late July. Here I was looking at proof positive that we could produce an excellent crop of cherries for the august market.

Even better it could be well integrated into grain farming through the use of multiple tree lines. The tree line is a ten foot wide strip of well spaced trees and natural prairie grass and weed cover running north south possibly or even at an angle. I prefer north south to use the tree line to capture blowing snow in winter. Again an angle will work as well so long as we avoid producing wind tunnels in the east west direction.

The next tree line can be set two swather passes over and continued to cover many square miles of land. You avoid close packing and excessive shading this way. This is an available luxury when you have ample land to work.

In addition, I would also plant an understory bush between the trees along the strip. This could be wild berries able to produce additional fruit for commerce. Choke cherries in particular come to mind as do saskatoons. The main thrust is to ensure a healthy ground cover in the strip that supports pollennators throughout the growing season.

Critically over ninety percent of the ground can continue to be cropped for wheat, corn, canola and many other staple crops already been produced heavily in the Prairies.

Thus a section of land (640 acres) used for normal cropping can have the equivalent of a highly productive cherry fruit orchard of over sixty acres on the same land.

I also suspect that the snow trapping abilities of this configuration and the fertilization produced by shed leaves will enhance grain production itself so even that part could be neutral.

The real surprise was that it was even possible and that my assumption long learned regarding our ability to grow cherries at this latitude was false.
Posted by arclein at 12:00 AM