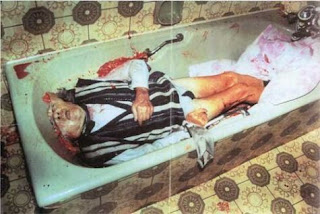 The bad news is that the the leadership of South Africa is turning a blind eye as the worst elements progressively attack the white population. That this is happening elsewhere is also made clear and it seems to be an unfortunate outcome of real regime change were a majority group is takes control and simply lacks the skills and will to protect all of its constituents.

The simple fix is to simply have have Canada extend citizenship to all white South Africans as a one time deal and be done with it. When the majority refuses to protect a clear identifiable majority it is time to be prepared for drastic action.  Canada had that option in the Late Thirties and failed to act.

The white community chose to ultimately do the right thing and showed the world that it was possible to do so. The problem here is that they had made no investment in the people who represented the majority and the result is large semi literate population with barbaric traditions. The black middle class is roughly the same size as the white middle class but is also in a serious minority situation.

Once again the leadership thrown up by black electoral politics are dreadful and outright dismissive of the rule of law and anything other than their sense of entitlement. It is time to stop giving any of these creeps a pass. The media needs to highlight these regimes and to scream their names to the rooftops. Otherwise the media is once more complicit with a pending genocide.

President Zuma of South Africa began the celebrations of the African National Congress’s 100-year anniversary with the ritual sacrifice of a bull.  While drums beat and singers in animal skins ululated, the animal died, its blood spilled out on the ground and the celebrations began.

Once the party was underway, Zuma sang “Dubula iBhunu,” an ANC song which means, “Kill the Farmer.” A court had ruled that “Dubula iBhunu” constituted hate speech, but President Zuma, who had survived a rape trial and 783 counts of corruption, was not worried about the law. The upper echelons of the ANC were above the law and adept at spilling blood, whether it was the blood of bulls, black rivals or white farmers.

During Zuma’s rape trial, ANC activists had chanted, “Burn the Bitch.” At the ANC’s centenary, Zuma sang, “Kill the Farmer.” Burning and killing have been the ANC’s traditional solutions to dealing with its enemies, and its long string of atrocities had kept it on the terror watch list in the United States until Obama took power and opened the door to the ANC’s butchers, along with the Muslim Brotherhood.

Zuma had joined the South African Communist Party in 1963 and his ANC regime still depends on its Tripartite Alliance with leftist unions and the Communist Party. Much as the left’s calls for an end to tyranny in Egypt paved the way for the tyranny of the Muslim Brotherhood, under the guise of fighting against racism, the left had succeeded in imposing a new racist regime on South Africa.

In Zimbabwe and Egypt, the left had rejected any possibility of a moderate solution leading to the present-day reign of terror. The only difference between Mugabe’s Zimbabwe and Zuma’s South Africa is that Mugabe has been in control of Zimbabwe for over 30 years, while the ANC has been running South Africa into the ground for less than two decades. Given another ten years of ANC rule, the likelihood is that South Africa will be in as bad a shape as Zimbabwe is now.

Like Mugabe, white farmers and business owners are Zuma’s enemies. There is a new Apartheid now in South Africa; it is an apartheid where the oppressor and the oppressed have switched places and the bloodshed is constant. The country’s white Boers have been disarmed, purged from the economy and systematically murdered.

3,000 white farmers have been murdered in South Africa at four times the rate of rural black South Africans. These attacks have not been random, but part of an organized effort conducted by hit squads against the most vulnerable targets. At the same time there has been a significant increase in police shootings of unarmed white South Africans. “Today we are going to arrest a Boer,” has become a common chant among African officers of the South African Police Service. And the Boers often don’t survive the arrest.

Like Mugabe, Zuma’s ANC has been seizing land from white farmers and expelling them from their homesteads. There are now white refugee camps in South Africa with an estimated 300,000 or 7 percent of the white population living in tent cities and shacks. If any other ethnic group or race were on the receiving end of such treatment, it would be denounced as ethnic cleansing.

Dr. Stanton of Genocide Watch, a respected human rights organization, has stated that the white population of South Africa is now in the sixth of the center’s eight stages of genocide. That sixth stage is defined as “Preparation.”

“Victims are identified and separated out because of their ethnic or religious identity. Death lists are drawn up. Members of victim groups are forced to wear identifying symbols. Their property is expropriated. They are often segregated into ghettoes, deported into concentration camps, or confined to a famine-struck region and starved. At this stage, a Genocide Emergency must be declared.”

The next stage after “Preparation” is “Extermination.”

The situation in South Africa had become serious enough that Brandon Huntley, a white South African, was granted refugee status by Canada. The decision was overturned after protests by the ANC regime, but the mass emigration by those white South Africans able to leave still continues. Over a hundred South Africans have received asylum in the United States and more applications are in the system.

Black Economic Empowerment (BEE) policies, the South African version of Affirmative Action, have closed job markets to white South Africans. Racial benchmarks have been incorporated into private industry and government service. As a result, Black South Africans with a higher education are 34% more likely to find a job than white South Africans with that same level of education. And even that education is becoming hard to come by as white students with excellent grades are being shut out of higher education and given few options besides a refugee camp or immigration to one of the few countries that will have them.

The new racist system has not made South Africa a better place, not for blacks or for whites. The ANC appears to be putting South Africa on the path to becoming the next Zimbabwe or Rwanda. Having pushed out the more moderate Mbeki and replaced him with Zuma, South Africa’s left was able to celebrate the end of any hope for peace and prosperity in South Africa.

This is part of the tragic pattern of the left’s revolutions. Whether or not the left takes over, it makes certain to leave behind a scorched earth political disaster. Across the Middle East, the left has brought Islamic tyrants to power and accepted that as a victory. Whether it’s Zuma in South Africa or Morsi in Egypt, whether it’s Boers in Africa or Copts in Egypt, the bigotry of the majority against a minority is mobilized for the tyranny of a few corrupt and powerful leaders.

The genocide of white South Africans is only in its infancy, but the purge of Arab Christians is swiftly spreading along the path of the Arab Spring revealing that it is not peace or democracy that the ANC and the Muslim Brotherhood truly want, but the oppression of the minority under majority rule.

The left has left misery and tyranny in its wake in Rhodesia, South Africa, Egypt, Iran and Tunisia. The question is where will it strike next?