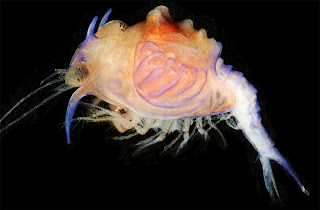 There are actually many such questions out there begging for a revisit and careful study.  It is here that researchers can strike gold.   My own favorite was coming to understand just how biological oxygen is stored in natural waters and the sea.  When looked at two hundred years ago, all were thwarted.  Google biological water on this blog if you care.

In the meantime we have discovered a new life way for some very large shrimp.  It takes me back to an odd proposal to mount an expedition up the Amazon (were else?) to acquire sample of the giant shrimp.  The chap relaying this tale recognized just how off the wall it was about halfway through and we both burst out laughing.

I am sure ample numbers of giant shrimp are out there and this is likely a good candidate.

For nearly two centuries, scientists have pulled so-called "monster larva" from the guts of fish and wondered what these thick-bodied creatures looked like as grown-ups. Now one biologist believes he has finally matched the larva with its adult counterpart.

"It's very exciting to have solved a nearly 200-year-old conundrum," Keith Crandall, a biology professor at , said in a statement.

Drawing from genetic evidence, Crandall reported in the journal Ecology and Evolution this month that the larva, Cerataspis monstrosa, is actually a baby version of the deep-water aristeid shrimp known as Plesiopenaeus armatus.

Its adult form, Plesiopenaeus, which calls the deep waters of the home, looks more like a lobster

Scientists began to suspect a link between the two in the 19th century.

"Because previous studies suggested an affinity between Cerataspis and penaeoid shrimp, and more specifically the family Aristeidae, we sampled heavily within these groups," Crandall explained.  His lab had been collecting crustacean DNA information for several years, providing a database to compare the Cerataspis DNA and make the link. They found a 99.96 percent match between the sequences of five genes for both organisms.