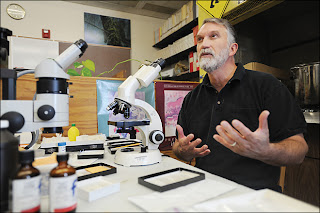 What I find most insulting is that a couple of physicists think that they have any authority whatsoever to even speak to the subject and then to be even listened to. I have spent much effort on the Sasquatch and the one thing that is sure is that the creature exists in large numbers. Ten thousand individual identifications surely stands up to exactly one identification of the pileated woodpecker. These identifications have been made across a wide spectrum of creditable witnesses including Game Wardens and hunters.

Science starts with observation and the Sasquatch has been a rich source of such. What is needed now is a modern well funded sequence of tracking expeditions combined with offering gift exchanges. We will either establish communication in the same way as Jane Goodall did with her mountain gorillas or get great photos.

Meanwhile, Jeff Meldrum is doing excellent work to use the data at hand and should be congratulated for bringing some sense of order to that data.

Meldrum, who teaches anatomy and anthropology at Idaho State University, might be the only college professor in the U.S. researching and publishing work on Bigfoot, or at least the only one putting his name to the subject.


Meldrum brought attention to the subject with his 2006 book, "Sasquatch: Legend Meets Science." Nearly all of the 13,000 copies of the book have been sold.


The Sasquatch limb is a thin branch to venture out on, and in the academic world, some would say it's more akin to thin ice.


"People say, 'You are paid by Idaho State and you are doing this?'" Meldrum said. "But this is legitimate research. This could be one of the most outstanding questions in natural history and human anthropology that we have today.


"I've gone to great lengths to go about it in a very objective, very professional manner in order to cultivate credibility."


The work will pay dividends if 54-year-old Meldrum or someone else proves the existence of a bipedal hominid that isn't a human or known primate, something Meldrum thinks will happen in his lifetime.


In the meantime, criticism follows.


"Each time you get these (different species) pushing closer to the present, you have to ask, 'Why do we assume we're the only ones?'" -- Meldrum


The first is anthropological, taking into account the fossils of many species of hominid distinctly different from the primates on the human evolutionary track or our extinct cousins, the Neanderthals.


With one species as modern as 11,000 years ago, the crux of Meldrum's argument is that we can't be sure a species hasn't persevered in some remote corner of wilderness. This doesn't mean Sasquatch exists. It means he could.


Meldrum's second realm is field work. His office is filled with more than 200 molds of Sasquatch footprints taken from all over North America. He said the molds, some 16 inches or bigger, indicate creatures more than 7 feet tall and weighing 700 pounds.


A desktop contains microimages of hair of bear, deer and other forest animals to compare to supposed Sasquatch samples.


In the realm of field work, Meldrum is certain Sasquatch lives. He's a solitary creature with a lifespan of at least 20 years, rarely reproduces and finds remote places to curl up and die.


Sasquatch is not the Biblical Cain, as some members of The Church of Jesus Christ of Latter-day Saints believe.


Meldrum, who is Mormon, said no evidence supports the notion.


"... Featherbrained and intellectually questionable academic endeavors like Bigfoot .... All of this suggests that the Easter bunny deserves serious consideration." - ISU physics professor Martin Hackworth in an April 8 newspaper column published in the Idaho State Journal


Meldrum's career isn't built on Bigfoot. He hardly mentions the creature in anatomy and evolution classes.

His legacy certainly is.


Meldrum's lonely perch as Sasquatch academic has made him a media darling. He's appeared on TV more than 20 times and featured in national magazines and newspapers.


He estimated he's been the subject of more than 150 interviews since 1996, when he investigated his first set of footprints. He drove to Walla Walla, Wash., expecting a hoax. Instead, he found tracks too big to be human that left an impression that indicated too much flexing to have been made by a prosthetic pressed into the landscape. He's been hunting the creature ever since.


Notoriety helps Meldrum's funding. Unable to go to the usual money spouts for scientific research, Meldrum turned to private foundations and donors. Many found him, including a Texas oil man who experienced what he thought was a Bigfoot encounter while hunting.


The oil man flew to Pocatello and agreed to pay for Meldrum's field tests - camera traps and hair snags designed to catch a piece of DNA that, if verified, would give Sasquatch instant credibility.


The Texan paid for several years of research.


Meldrum's notoriety also brought attention to ISU, which not everybody saw as a good thing.


Hackworth, who has taken shots at Meldrum over the years, is not the only critic on campus.


Another physics professor, Douglas Wells, sounded off to the L.A. Times for an article in 2006.


"One could do deep-ocean research for SpongeBob SquarePants," Wells said. "That doesn't make it science."

Meldrum said he fought an uphill battle for tenure and for full-professor status, saying the situation nearly became litigious.


He chuckled while recalling a 2006 Associated Press article and paraphrased the opening line, "Dr. Meldrum, something of a hulking figure himself, lurked in his dimly lit laboratory, shunned by faculty and students alike …"


"You've obviously got to have a sense of humor and a thick skin to do this," he said.


"Meldrum is a genius ahead of his time. His work will shine for centuries afterwards." -- online comment left by user bigfooter1 following a 2007 Scientific American article on Meldrum


"Meldrum is a crackpot of the first order. He will be laughed at for the entire 15 minutes of his fame." - The next comment on the article, posted by reader Chris Jones


Humans want something to be out there.


Whether they're looking for the serpent in Loch Ness, the oval-faced alien in Area 51, ghosts in the attic and the government conspiracy covering it all up, some people harbor feverish beliefs that something mysterious lurks in the shadows waiting to be discovered.


Bigfoot falls in the paranormal camp too often for Meldrum.


Yes, Sasquatch shares legend status with other creatures, and yes, Meldrum believes. But criticism that he's "faith-based" or too much of a "true believer" to maintain scientific objectivity aren't fair, he said. His belief stems from the footprints and not the other way around.


Meldrum hates that his book appears in the New Age section of bookstores more often than it does in the Natural History section. He will tell you the Bigfoot camp is full of nut jobs. He's careful not to affiliate with Bigfoot groups based on enthusiasm rather than science, which are pretty much all of them.

While there are some scholars interested in Bigfoot, including the editorial board of his research group, the Relict Hominoid Inquiry, many of the Bigfoot hunters Meldrum runs into are nearly as different from him as are the Hackworths of academia.


A man once told Meldrum at a Bigfoot conference that he'd encountered Sasquatch. The creature asked him, "Are you scared?" The man replied that he was.


The strange thing, the man said, was that Bigfoot knew he was scared from more than a half-mile away.


If they were a half-mile apart, how did the man communicate with the creature?


The man answered he is psychic.


While lecturing at the convention, Meldrum told the crowd the story about his conversation with the psychic.

Half of the audience laughed.