Why Humans Have Evolved So Fast 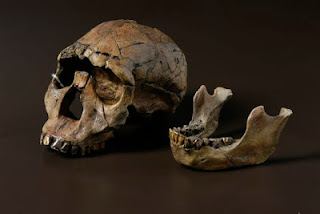 Yes, we need a better answer for why our brains evolved and grew so large. It is pretty clear that when man left the forests and its troops, he became man the runner who used his skills to exhaust game. That was two million years ago.

The argument here is that larger groups demanded larger brains in order to compete successfully. With constant conflict and best hunting grounds in the balance, selection for larger troops was natural and possibly helped by brain size. Except it really does not work that well.

More plausibly, the increase in population created communication demands that also included trading skills which was something new but increased the ability to achieve higher populations. This all increased pressure to develop the brain's language capacity at least and provided such volume is linked to increased cognitive skills ,then the race was on.

I have also argued that the natural locale for the development of a village social structure was on tidewater were sufficient food was in place to support a large community. Our eyes are too focused on the plains and forget the natural fecundity of the coast which makes everything much easier.

Why humans have evolved so fast


What explains the extraordinarily fast rate of evolution in the human lineage over the past two million years?

A leading human origins researcher has come up with an idea that involves aggression between groups and the boom-bust cycles that have punctuated our spread into new environments.

Prof Ian Tattersall said there were few examples to rival the accelerated evolution that led to our species.


He was speaking at this year's Calpe conference in Gibraltar.


"However you slice it, evolution within this [human family] has been very rapid indeed," Prof Tattersall, from the American Museum of Natural History (AMNH) in New York, told the conference.
\

"I think it's fair to say that our species Homo sapiens and its antecedents have come much farther, much faster than any other mammalian group that has been documented in this very tight time-frame."


This phenomenon of accelerated evolution is known as "tachytely".


Among our ancestors, brain size doubled between two million and one million years ago.

Then it has almost doubled again between one million years and the present day.


Along with the increase in brain size came a reduction in the size of the teeth and face along with other changes in the skull.[ This was driven by access to fire and the derived ability to process complex plant foods and is nothing special in itself - arclein]


The increase in brain size seems to have coincided with a modern physique characterised by a linear shape, long legs and relatively narrow hips. These features can already be seen in the skeleton of the "Turkana boy" from Kenya, who lived about two million years ago.

This contrasts sharply with the short legs and long arms of the Turkana boy's antecedent "Lucy" (Australopithecus afarensis), who lived in Ethiopia about one million years earlier.


Such fast change is not seen among apes, and while Prof Tattersall acknowledges the importance of the move our ancestors made from a tree-dwelling, to a ground-dwelling existence - something which has not affected our primate cousins - he says it is not enough to explain what is observed.


"Clearly the definitive abandonment of dependence on trees... has to count as one of the most radical shifts in adaptive zone ever made by any vertebrate since the very first tetrapod heaved itself out of water and on to terra firma," he said.


"Under natural conditions, it is very hard to see how the initial invasion of a new ecozone by hominids could have so consistently driven rapid change over the long period of time that we're talking about."


Human culture was probably the special, consistently present ingredient that drove the continuing fast pace of change in our lineage after we left the forests, said Prof Tattersall, but not in the way that some other researchers have proposed.


Certain evolutionary psychologists have popularised a model in which culture and brain complexity spurred each other on to greater heights in humans.


But Prof Tattersall said the way our technology transformed in fits and starts, along with the way these changes were often separated from biological evolution, meant this idea was not as good a fit for what is seen in the archaeological and fossil records.


Aggression between small, distinct human groups in the past is one of the major remaining agents of such changes, he said.


"Inter-group conflict would certainly have placed a premium on such correlates of neural function as planning and throwing," Prof Tattersall explained.


"If we were somehow able to implicate conflict among groups as a selective agent for increasing intelligence within groups, this might explain the otherwise quite mystifying independent increases in brain size that we see in several different lineages within the genus Homo."


Such conflict could be seen as a form of predation. And, predation is regarded as a classic example of the "Red Queen" hypothesis whereby prey and predator become faster or more cunning in a self-reinforcing way.


Indeed, there are hints of such conflict from the sparse fossil record. A paper published this month in the Journal of Human Evolution suggested that ancient humans in northern Spain were engaged in inter-group cannibalism against another band of people.


Culture, in the form of clothing, fire use and the construction of shelters, has allowed humans to expand into environments that their relatively frail bodies could not otherwise have coped with.


But both culture and technology have their limits. And relatively good climatic conditions would have favoured population expansions.


This made the artificially enlarged ancient human populations vulnerable to fragmentation when environmental conditions worsened.


During the onset of an Ice Age or a drought, human populations would have contracted, driving the remaining small, isolated human groups to diversify - developing different biological traits from one another.


The wild environmental fluctuations in Pleistocene times - from about 2.5 million to 11,000 years ago - would have provided the ideal conditions for this to happen, the AMNH professor of palaeoanthropology explained.


When conditions improved again, populations that had developed different characteristics would have come into contact again. This might have increased the likelihood of competition between distinct groups, but also allowed genetic novelties to spread that would not have arisen without the initial fragmentation.


Prof Tattersall refers to the phenomenon as the "ratchet effect" and pointed to the large variation in human fossils from the early Pleistocene in Africa as an example, which may support his hypothesis.


At the conference, Richard Wrangham from Harvard University offered an alternative view, questioning the role of conflict as a driver. He pointed out that human hunter-gatherers had similar rates of inter-group aggression to chimpanzees.


The Calpe '12 conference runs from 13-16 September in Gibraltar.