Why Democrats are Abandoning Obama with Rob Taub 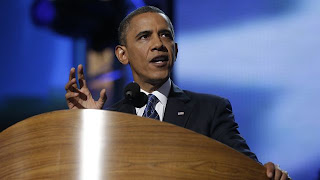 When I investigate political trends, my focus is always on the numbers. Campaigns matter of course, but they rarely if ever change the position of the die hard support which can be counted on the rationalize the likes of Hitler, let alone a mere failed president. Thus a considered democrat shifting his
position does need to be listened to because folks will be making up their minds for much the same reasons unless something spurious is thrown into the game.

As it stands, the two candidates are essentially neck and neck as we now enter the true period of voter decision making. This totally normal. It is a two horse race and Jesus Christ could not do better.

However, Romney has room to grow while Obama has room to shrink simply because his track record is decidedly underwhelming on the domestic economic file. Obama is fighting his record and has already taken his best shots at the Romney record.

Romney's latest back down on repealing the Obama care legitimation is a deliberate attempt to open the doors for wavering democrats to jump ship. It is also the correct policy. Way more important, it has not been noticed, but he plans specifically to down load as much of the federal service bureaucracy unto the States as he can.

This offloads much of the entitlement problem from the federal agenda. This surely were Obama care is going at mach speed. It also introduces a healthy whiff of competition into the those massive programs. I get profoundly annoyed with a medical system utterly gamed by the insurance industry with its whole incentive system wrapped around maximizing the gross billing. That is not competition at all but private tax farming.

I think that even democrats can buy into that as most of the medical entitlement coin actually misses their targeted constituencies. That is presuming of course that they bother to check.

Why Democrats, including me, are abandoning Obama


I wrote an article last month for this website discussing how I – along with other Democrats and independents – might just cast our vote for Romney, although I didn't fully explain the rationale for the change. While I'm not claiming there is a new wave of supporters for Mitt Romney, there is no denying that there is a large number of disgruntled Democrats and independents who are dissatisfied with President Obama. And that may just be enough to elect Mitt Romney.

At this week's Democratic Convention, president Obama spoke of his many hopes and dreams for America. He has often said that he expects to leave a legacy of great achievements, like those of Presidents John F. Kennedy and Lyndon B. Johnson.

Kennedy was able to galvanize the nation not simply because he wanted to do so, but as a result of methodical campaigning and stumping that culminated with a cross-country trip in 1956

, where he introduced himself to voters, delegates and politicians.  Lyndon Johnson was able to pass numerous bills into law, not merely for the reason that they were morally right, but because he was a skilled politician who understood and accepted the workings of our political system.


JFK was a relentless and industrious campaigner.  He came from a level of wealth and privilege that placed him at the top of the one percent of his day, yet instead of rejecting the mandatory campaign requirements of politicians of that era, he embraced the daily rigors of handshaking, personal visits and ward style politics, exploiting them further than anyone ever had before.

The president has a wonderful vision for America, but it's nothing more than a delusion that can't be achieved during a time of record – and climbing – deficits.

and he worked tirelessly to unite our country.  It’s been said that while most men were content to read a book or watch a sporting event for recreation, Lyndon Johnson would follow the results of a local Texas school board election for fun.  His love for politics was unflagging.  That was his tennis.


President Obama is said to abhor the daily machinations of Washington politics.  He refuses to miss more than two dinners a week with his daughters. He prefers not to meet with senators, congressmen or significant donors, yet he still expects to reap the benefits normally provided by those circumstances.

Obama snubbed the advice of George Soros (perhaps his wealthiest and most influential donor) and has alienated many other important supporters. What President Obama may perceive as altruistic is nothing more than intractable behavior along with a refusal to accept the reality of American politics and – ultimately – the basic job description of president of the United States.


Perhaps President Obama should consider that his dislike of Washington politics has contributed to the inertia and current stalemate that exists in Washington. He promised hope and change, but his current campaign is divisive with negative advertisements and driven by class warfare.

In Thursday night's convention address, President Obama reprised the same promises he made in 2008, again with no feasible suggestions of how to pay for them.

The president has a wonderful vision for America, but it's nothing more than a delusion that can't be achieved during a time of record – and climbing – deficits. Our government has built roads, bridges and schools that have educated us.  However, it has also become a bloated money burning machine in desperate need of reform – a word that does not seem to exist in Obama's vocabulary.

Democrats are jumping ship because President Obama is offering nothing but blame for the previous administration and his own pipe dreams at a time when voters need some real assurance if they’re going to believe the economy can be saved.  Unfortunately, speaking as one of those Democrats, I have little hope that President Obama will change.

Rob Taub is a writer and comedian. He is host of Tech Hub on WOR AM radio.

I do not suppose that anyone would like to make a bet as to the winner in November?
dpaladin at ix dot netcom dot com

You will be asked to prove that you are human