Hope for Back Pain 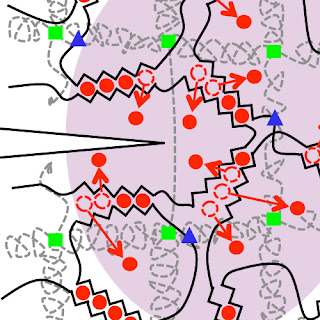 This sounds extremely promising and provides a new departure for gel applications. Replacing cartilage is an obvious starting point. It also is likely to be a great starting point for a helmet that molds itself to the skull and able to provide a cushion against sharp acceleration. Since it is tough, the amount used could be minimized easily also to handle weight demands.

It is even tougher than cartilage. Thus joint replacement does become possible while retaining original function. This is particularly welcome for those facing the prospect of joint surgery over the next decade and thereafter. It will still take time to implement, but that was the one thing missing.

Of course, the big job for artificial cartilage is spine repair which has been utterly unsatisfactory up to this point. It is really very good news and real hope for back pain.


Tough gel stretches to 21 times its length, recoils, and heals itself

Biocompatible material created at Harvard is much tougher than cartilage

Cambridge, Mass. - September 5, 2012 - A team of experts in mechanics, materials science, and tissue engineering at Harvard have created an extremely stretchy and tough gel that may pave the way to replacing damaged cartilage in human joints.

Called a hydrogel, because its main ingredient is water, the new material is a hybrid of two weak gels that combine to create something much stronger. Not only can this new gel stretch to 21 times its original length, but it is also exceptionally tough, self-healing, and biocompatible—a valuable collection of attributes that opens up new opportunities in medicine and tissue engineering.

The material, its properties, and a simple method of synthesis are described in the September 6 issue of Nature.

The researchers pinned both ends of the new gel in clamps and stretched it to 21 times its initial length before it broke. (Photo courtesy of Jeong-Yun Sun.)

"Conventional hydrogels are very weak and brittle—imagine a spoon breaking through jelly," explains lead author Jeong-Yun Sun, a postdoctoral fellow at the Harvard School of Engineering and Applied Sciences (SEAS). "But because they are water-based and biocompatible, people would like to use them for some very challenging applications like artificial cartilage or spinal disks. For a gel to work in those settings, it has to be able to stretch and expand under compression and tension without breaking."

To create the tough new hydrogel, they combined two common polymers. The primary component is polyacrylamide, known for its use in soft contact lenses and as the electrophoresis gel that separates DNA fragments in biology labs; the second component is alginate, a seaweed extract that is frequently used to thicken food.

Separately, these gels are both quite weak—alginate, for instance, can stretch to only 1.2 times its length before it breaks. Combined in an 8:1 ratio, however, the two polymers form a complex network of crosslinked chains that reinforce one another. The chemical structure of this network allows the molecules to pull apart very slightly over a large area instead of allowing the gel to crack.

By themselves, polyacrylamide gels (a) and alginate gels (b) are brittle. The new hydrogel (c), however, has a more complex molecular structure that helps to dissipate stress across a wide area. The red circles represent calcium ions, and the blue triangles and green squares represent covalent crosslinks between chains. (Image courtesy of Jeong-Yun Sun and Widusha R. K. Illeperuma.)

The alginate portion of the gel consists of polymer chains that form weak ionic bonds with one another, capturing calcium ions (added to the water) in the process. When the gel is stretched, some of these bonds between chains break—or "unzip," as the researchers put it—releasing the calcium. As a result, the gel expands slightly, but the polymer chains themselves remain intact. Meanwhile, the polyacrylamide chains form a grid-like structure that bonds covalently (very tightly) with the alginate chains.

Therefore, if the gel acquires a tiny crack as it stretches, the polyacrylamide grid helps to spread the pulling force over a large area, tugging on the alginate's ionic bonds and unzipping them here and there. The research team showed that even with a huge crack, a critically large hole, the hybrid gel can still stretch to 17 times its initial length.

The researchers used a razor blade to cut a 2-cm notch across the gel. In the image above (left), the gel has been stretched very slightly so that the notch is visible. This damaged gel was still able to stretch to 17 times its initial length without breaking. (Photo courtesy of Jeong-Yun Sun.)

Importantly, the new hydrogel is capable of maintaining its elasticity and toughness over multiple stretches. Provided the gel has some time to relax between stretches, the ionic bonds between the alginate and the calcium can "re-zip," and the researchers have shown that this process can be accelerated by raising the ambient temperature.

The group's combined expertise in mechanics, materials science, and bioengineering enabled the group to apply two concepts from mechanics—crack bridging and energy dissipation—to a new problem.

"The unusually high stretchability and toughness of this gel, along with recovery, are exciting," says Suo. "Now that we've demonstrated that this is possible, we can use it as a model system for studying the mechanics of hydrogels further, and explore various applications."
"It's very promising," Suo adds.

Beyond artificial cartilage, the researchers suggest that the new hydrogel could be used in soft robotics, optics, artificial muscle, as a tough protective covering for wounds, or "any other place where we need hydrogels of high stretchability and high toughness."

This work was supported by the U.S. Army Research Office, the National Science Foundation (NSF), the Defense Advanced Research Projects Agency, the National Institutes of Health, and the NSF-funded Materials Research Science and Engineering Center (MRSEC) at Harvard. The researchers also individually received support from the NSF Research Triangle MRSEC, a Haythornthwaite Research Initiation grant, the National Research Foundation of Korea, an Alexander von Humboldt Award, and Harvard University.
Posted by arclein at 12:00 AM