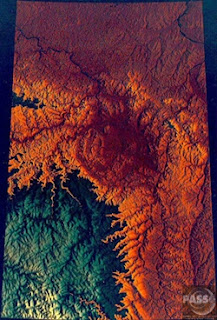 A more plausible explanation for the diamonds is that the impacting asteroid was carbonaceous and the impact horizon reached the temperatures necessary for diamond formation. I also see little note here of actual gem quality diamonds which is another reason to leave the deposit undisturbed all this time.

Whatever concerns that may have existed regarding diamond supply have now been put to rest. It also goes without saying that similar impacts will have similar results if my conjecture holds true. Thus the earth and the solar system could be awash in diamonds.

We will be seeing more technical details, but it is there and its supply will begin to enter the market.

'Trillions of carats' lie below a 35-million-year-old, 62-mile diameter asteroid crater in eastern Siberia known as Popigai Astroblem. The Russians have known about the site since the 1970s.

http://ca.news.yahoo.com/russia-reveals-shiny-state-secret-awash-diamonds-131212873.html
Russia has just declassified news that will shake world gem markets to their core: the discovery of a vast new diamond field containing "trillions of carats," enough to supply global markets for another 3,000 years.

The Soviets discovered the bonanza back in the 1970s beneath a 35-million-year-old, 62-mile diameter asteroid crater in eastern Siberia known as Popigai Astroblem.

They decided to keep it secret, and not to exploit it, apparently because the USSR's huge diamond operations at Mirny, in Yakutia, were already producing immense profits in what was then a tightly controlled world market.

The Soviets were also producing a range of artificial diamonds for industry, into which they had invested heavily.

The veil of secrecy was finally lifted over the weekend, and Moscow permitted scientists from the nearby Novosibirsk Institute of Geology and Mineralogy to talk about it with Russian journalists.

According to the official news agency, ITAR-Tass, the diamonds at Popigai are "twice as hard" as the usual gemstones, making them ideal for industrial and scientific uses.

The institute's director, Nikolai Pokhilenko, told the agency that news of what's in the new field could be enough to "overturn" global diamond markets.

"The resources of super-hard diamonds contained in rocks of the Popigai crypto-explosion structure, are by a factor of ten bigger than the world's all known reserves," Mr. Pokhilenko said. "We are speaking about trillions of carats. By comparison, present-day known reserves in Yakutia are estimated at one billion carats."

The type of stones at Popigai are known as "impact diamonds," which theoretically result when something like a meteor plows into an existing diamond deposit at high velocity. The Russians say most such diamonds found in the past have been "space diamonds" of extraterrestrial origin found in meteor craters.

They claim the Popigai site is unique in the world, thus making Russia the monopoly proprietor of a resource that's likely to become increasingly important in high-precision scientific and industrial processes.

"The value of impact diamonds is added by their unusual abrasive features and large grain size," Pokhilenko told Tass. "This expands significantly the scope of their industrial use and makes them more valuable for industrial purposes."

Russian scientists say the news is likely to change the shape of global diamond markets, although the main customers for the super-hard gems will probably be big corporations and scientific institutes.