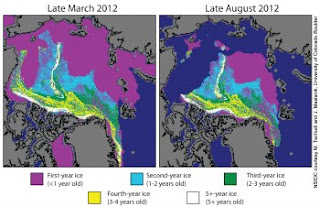 First off, the areal extent of the ice has dropped below four million square kilometers and has set a new record. This appears to have been augmented by a fortuitous cyclone which broke up a lot of the ice and caused enhanced melting much as unusual winds did the same in 2007. Whatever the case, it certainly confirms that we are dealing with much less ice.

This report shares a lot of new information including a mapping of the five year plus ice which appears to be structurally more stable and positioned than I had any reason to ever understand. The assumption of a circumpolar conveyor belt is surely wrong. We have instead separate Gyres of which one is the mentioned Beaufort Gyre.

The result is that the old ice accumulates along the northern margins of the Arctic Islands and additionally in a narrow arc that runs north just west of the pole. Thus these areas of accumulation need not flush out any time soon of ever for that matter. What has been flushed out is the weaker younger ice on the way to been pushed into these two strips of accumulation. This process can continue with diminishing results as most of the input energy must be absorbed eliminating the annual winter ice.

I suspect that we are already looking at optimal conditions in the Arctic and even if the sea ice continues to deteriorate, we are down to the stubborn core that must surely resist breakup even as weakening continues. In the meantime both passages are now available for sporadic shipping and can be used carefully.

Following the new record low recorded on August 26, Arctic sea ice extent continued to drop and is now below 4.00 million square kilometers (1.54 million square miles). Compared to September conditions in the 1980s and 1990s, this represents a 45% reduction in the area of the Arctic covered by sea ice. At least one more week likely remains in the melt season. 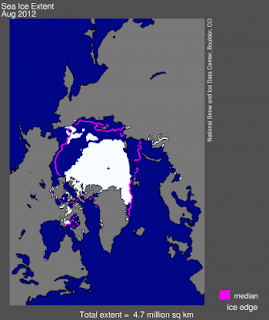 At the end of August, ice remained in the Western Parry Channel, and neither the northern or southern routes of the Northwest Passage were open. While much of the ice has cleared out, ice still remains, as confirmed by our colleague Steve Howell at the Canadian Ice Service. In the latter half of August, more ice actually moved into the passage routes when ice was pushed down into the channels from the north. Whether that ice will clear out remains to be seen. 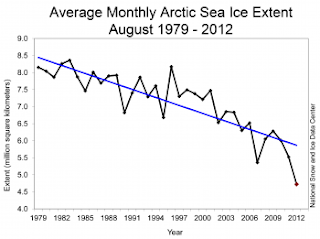 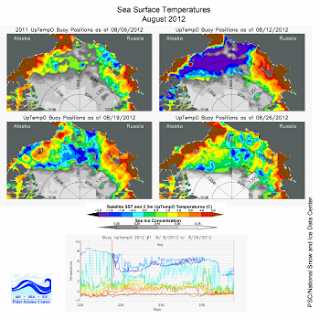 
In recent summers, Arctic Ocean sea surface temperatures (SSTs) have been anomalously high (see our 2010 and 2011 end-of-summer posts), in part linked to loss of the reflective ice cover that allows darker open water areas to readily absorb solar radiation and warm the mixed layer of the ocean. According to Mike Steele, Wendy Ermold and Ignatius Rigor of the University of Washington, SSTs in the Beaufort, Chukchi, and Laptev seas were once again anomalously high before the strong cyclone (mentioned earlier and discussed in our previous post) entered the East Siberian and Chukchi seas on August 5, 2012. SSTs were as much as 5 degrees Celsius (9 degrees Fahrenheit) above normal along the coastal areas in those seas. After the storm, the warm water that developed through summer was interspersed with large areas of cold water created by ice melt. By the third week of August, sea surface temperatures were mostly back to levels observed before the storm, but with a few more patches of colder water interspersed from additional ice melt.

A closer view of the variation in SSTs before and after the storm is recorded in the University of Washington Polar Science Center UpTempO buoy data. A buoy deployed on August 8, 2012 in open water during the storm initially shows a very warm 10-meter (33-foot) thick surface mixed layer, likely the result of solar heating. On August 12, the buoy enters a relatively cooler patch, gradually warms, enters another cool patch 12 days later and then starts to warm again through August 26. These patches of cooler water may be a result of ice melt and/or the impact of advection from the storm.

Figure 5. These images from March 2012 (left) and August 2012 (right) show the age of the ice cover in spring and at the end of summer. Much of the Arctic ice cover now consists of first-year ice (shown in purple), which tends to melt rapidly in summer’s warmth. However, the oldest ice, that had survived five or more summers (shown in white), declined by 51%.

Ice age is an important indicator of the health of the ice cover. Old ice, also called multiyear ice, tends to be thicker ice and less prone to melting out in summer. The last few summers have seen increased losses of multiyear ice in the Pacific sector of the Arctic; multiyear ice that is transported into the Beaufort and Chukchi seas tends to melt out in summer before being transported back to the central Arctic Ocean through the clockwise Beaufort Gyre circulation. This summer, the tongue of multiyear ice along the Alaska coast mostly melted out by the end of August, with a small remnant left in the Chukchi Sea. The ice on the Pacific side of the Arctic has melted back to the edge of the multiyear ice cover, which should help to slow further ice loss in the region. In the Laptev Sea, by contrast, a large amount of first-year ice remains. In the last two weeks, open water areas have developed within the first-year ice in the Laptev Sea, helping to further foster melt in that region.

Between mid-March and the third week of August, the total amount of multiyear ice within the Arctic Ocean declined by 33%, and the oldest ice, ice older than five years, declined by 51%.