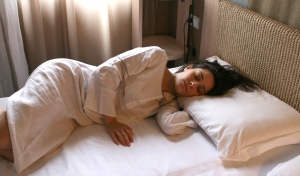 There may even be some value in this bit of work although it appears that the fantasy of learning complex material while sleeping is as elusive as ever. If we can produce therapies that resolve or ameliorate brain cognition issues, then we may have a powerful and effective tool. That appears to be the promise here.

Anger management is a huge issue for most folks that may be addressable although it appears difficult. Yet the brain can learn to develop alternative responses. Recall that anger is a learned response that is typically grossly reinforced throughout childhood through misapplied nurture. The victim needs to learn alternative responses and to have them reinforced.

The mere fact that a wide range of anger responses are exhibited proves my case.

How to learn in your sleep

Subjects trained to sniff pleasant smells while asleep retain the conditioning when they wake up.

Associations learned while asleep can be retained after waking up.


It sounds like every student's dream: research published today in Nature Neuroscience shows that we can learn entirely new information while we snooze1.

Anat Arzi of the Weizmann Institute of Science in Rehovot, Israel, and her colleagues used a simple form of learning called classical conditioning to teach 55 healthy participants to associate odours with sounds as they slept.

They repeatedly exposed the sleeping participants to pleasant odours, such as deodorant and shampoo, and unpleasant odours such as rotting fish and meat, and played a specific sound to accompany each scent.

It is well known that sleep has an important role in strengthening existing memories, and this conditioning was already known to alter sniffing behaviour in people who are awake. The subjects sniff strongly when they hear a tone associated with a pleasant smell, but only weakly in response to a tone associated with an unpleasant one.

But the latest research shows that the sleep conditioning persists even after they wake up, causing them to sniff strongly or weakly on hearing the relevant tone — even if there was no odour. The participants were completely unaware that they had learned the relationship between smells and sounds. The effect was seen regardless of when the conditioning was done during the sleep cycle. However, the sniffing responses were slightly more pronounced in those participants who learned the association during the rapid eye movement (REM) stage, which typically occurs during the second half of a night's sleep.

Arzi thinks that we could probably learn more complex information while we sleep. “This does not imply that you can place your homework under the pillow and know it in the morning,” she says. “There will be clear limits on what we can learn in sleep, but I speculate that they will be beyond what we have demonstrated.”

In 2009, Tristan Bekinschtein, a neuroscientist at the UK Medical Research Council's Cognition and Brain Sciences Unit in Cambridge, and his colleagues reported2 that some patients who are minimally conscious or in a vegetative state can be classically conditioned to blink in response to air puffed into their eyes. Conditioned responses such as these could eventually help clinicians to diagnose these neurological conditions, and to predict which patients might subsequently recover. “It remains to be seen if the neural networks involved in sleep learning are similar to the ones recruited during wakefulness,” says Bekinschtein.

The findings by Arzi and her colleagues might also be useful for these purposes, and could lead to 'sleep therapies' that help to alter behaviour in conditions such as phobia.
“We are now trying to implement helpful behavioural modification through sleep-learning,” says Arzi. “We also want to investigate the brain mechanisms involved, and the type of learning we use in other states of altered consciousness, such as vegetative state and coma.”