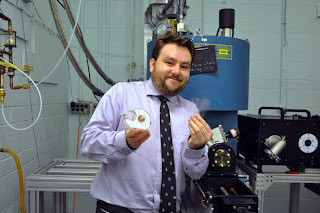 It may turn out to be easy. I am looking for lamination between superconducting material and electronic control surfaces for the manufacture of the shell of a MFEV (google on this blog). This means we can easily investigate behavior before committing to manufacturing processes.

Of course it is never quite that easy but it makes a good story and avoids the hard problem of explaining why it works okay. We will take it.

All this is still very much in the basic research stage, although the time to commercialization has been falling far faster than it ha in the past.

U of T professor Ken Burch lead a team which has developed a new technique to induce high-temperature superconductivity in a semiconductor for the first time by using Scotch tape.

No, you can’t use duct tape for everything.

Sometimes, only Scotch tape will do.

Take it from an international team of physicists, led by the University of Toronto, which used double-sided Scotch tape to give a semiconductor the properties of a high-temperature superconductor.

The results of the experiment, published Tuesday in the online journal Nature Communications,may help in the development of new devices that could be used in quantum computers and to improve energy efficiency.

The U of T team leader, physicist Ken Burch, explained that duct tape would have been too strong to use in the experiment, conducted last summer, and might have damaged materials.

“Scotch tape is sticky, but not too sticky,’’ he said.

High-temperature superconductors conduct electricity without heating up and losing energy at liquid nitrogen temperatures. They’re the building blocks for the next-generation quantum computers. Yet their properties, found in compounds of iron, copper and oxygen, cannot be incorporated into semiconductors such as silicon used in computer chips because of the differences in structure and chemical makeup.

That’s where the tape came in.

The team used the two-sided tape and glass slides to put the high-temperature superconductor close to a particular type of semiconductor, called a “topological insulator,’’ which is very metallic at the surface.

The tape was used, said Burch, “to peel away the top surface’’ of the superconductor and the semiconductor, which conducts energy “but just barely.’’

As a result, superconductivity was induced in the semiconductor, a physics “first.’’

So, what does it mean?

“I wish I could tell you we cured cancer,’’ said Burch jokingly. “We kind of opened the door to this new interface between high-temperature superconductors and semiconductors which basically was thought to be impossible to make.’’

New advances that could come out of this, he says, include the development of technology such as quantum computers, which would use the power of atoms and molecules to perform memory and processing tasks.