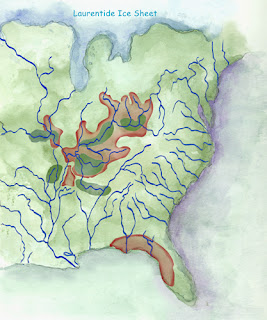 Archeology presently gives us two notable dates in terms of the peopling of the Americas. The first and most critical is the successful initial penetration by sea adapted northern hunter gathers some twenty thousand years ago who were masters of the Kayak. It appears clear, though controversial that both coasts were penetrated.

However, it is surely as certain that their life way kept them initially on the coast and in the case of the Pacific Northwest, there is were they in fact remained to modern times. The Northwest is sharp reminder that large organismic populations become possible on the coast far beyond what is possible inland.

The interior terrain of the North East coast would also have been easily as daunting as the Northwest. The trees while not evergreens were easily as large as what appeared on the west coast. At the same time it was elephant country and wherever the trees became small enough, the mammoths and mastodons knocked them down to provide open country.

Thus is is no surprise that the expanding populations likely stuck to obvious fisheris.

We thus come to the second event which is the emergence of advanced stone age hunters with their unique Clovis point. That appears to evolved over a couple of thousand years before succumbing to the Pleistocene Nonconformity around 12,900 BP.

These folks were surely going after the heavies. The point itself is simply impractical for smaller game which will succumb nicely to a well placed arrow. It was also likely quite expensive. Yet it an ideal tool for dispatching a Mammoth or Mastodon. These animals cannot be killed easily with any of the other tools to hand.

Whereas this point driven into the animal's jugular will open a wound large enough to bleed out the animal quickly.

Thus a successful hunting strategy will be to harry a victim into a pit that will immobilize the creature. Then one can approach the creature from behind and out of way of the flailing trunk for the killing stroke. Yes we clearly can use the Clovis point to harvest one of these giants.

These maps show us what we now understand as the activity area of the Clovis peoples. I suspect that it was much more deeply distributed and we simply do not have evidence yet.

The life way is simply too convenient. One converts a migration route choke point into a holding trap and cut out a couple of animals. You then find your spot and hit the jugular. It may even be possible to simply throw at short range although that is likely to misfire. If a single animal produces a ton of meat or even vastly more, the result is thousands of pounds of pemmican made from the dried and ground meat.

The more important point is that with a staple like this we have the capacity to produce large settlements inland that would compare even to coastal populations.

Unfortunately such larger settlements would naturally be on long lost river banks providing easy access to large fish for fresh meat and wetland produce such as the cattail.

This item came by way of Dale Drinnon

Archeologists use the term Paleoindian to refer to the earliest American Indians descended from Asiatic migrants. Paleoindians were present in North America by the end of the last Ice Age. They quickly spread into Central and South America. The best known and earliest Paleoindian culture is called Clovis, named after a town in New Mexico where, in 1932, Clovis artifacts were discovered in Pleistocene sediments. The most diagnostic artifact is the Clovis point, a well-made, lanceolate (or willow leaf shaped) spear point with flutes for “hafting” or securing the point onto a bone or wood shaft. Flutes are shallow channels on one or both faces of the point, produced by removing long, thin flakes that extend from the base part way up the blade. Clovis points were components of a sophisticated weapon complex consisting of a multi-piece dart assembly. A throwing stick or “atlatl” was used to increase the force with which the dart could be hurled.

Clovis points are found in Canada, the United States, and Mexico. Many Clovis sites also contain the remains of large Ice Age mammals, including mammoths and mastodons. Clovis sites are radiocarbon dated between 11,500 and 10,500 B.C. 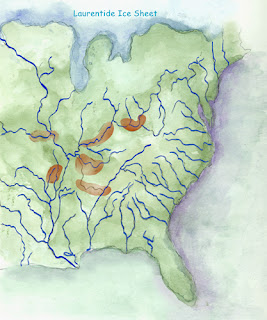 J. Christopher Gillam studied the distribution of Clovis artifacts in Arkansas. Most Clovis material occurs in the eastern part of the state, indicating that the first groups migrated down the Mississippi River from the northern plains. Radiocarbon-dated sites in Missouri, Oklahoma, and Tennessee place the Clovis arrival in the Mid-South around 10,500 B.C. Clovis points are not evenly distributed; rather, they occur in regional clusters that archeologists interpret as “staging areas.” Staging areas are the localities where Paleoindian migrations halted and groups began to settle down and make adaptations—that is, changes in their routines—in relation to regional environments.

Archeologist Juliet Morrow studies the regional variants of Clovis points that developed in and around mid-South staging areas. She believes the appearance of these variants represents the emergence of regionally distinctive Paleoindian groups. These groups maintained their mobile way of life, but instead of migrating across a wide, uninhabited terrain, they now moved within specific territories they considered their home. Groups periodically branched out to occupy new territories in adjacent region


Clovis people lived in scattered groups consisting of perhaps two dozen or so members. There may have been only one hundred to one-hundred-fifty people in all of what is now Arkansas. They did not build permanent houses, nor did they make heavy implements. Much more efficient for their needs were temporary dwellings, such as lean tos or simple wood frame structures covered with bark, grass, or hides. Warm, well-made animal skin clothing provided adequate protection in cold environments. Other equipment was light enough to be personally carried or towed by dogs.

Ancient peoples’ views of the world can sometimes be inferred by studying their artworks. Unfortunately, very few Paleoindian artworks have been found. A few pieces of bone, ivory, and stone found at several Paleoindian sites across North America are inscribed with geometric designs that are difficult if not impossible to interpret. A zigzag “lightning bolt” drawn with red ochre (a form of iron oxide) on the skull of a bison killed by late Paleoindian hunters in Oklahoma is interpreted by archeologist Lee Bement as evidence of hunting ritual. These tantalizing examples don’t shed a great deal of light on specific Paleoindian beliefs, but they demonstrate a capacity for symbolic communication that later Indian groups used extensively.

When Clovis people reached the Mid-South, upland areas in what is now Arkansas were covered by patches of tundra, grassland, and boreal forest. Bottomlands supported mixed deciduous forests. There were few edible plant foods, but large Ice Age mammals including mammoths and mastodons roamed grasslands and open woodlands and caribou grazed scattered tundra zones. This mixture of closely-spaced tundra, boreal forest, hardwood forest, and grassland habitats no longer exists anywhere in the world. Another unique feature of Ice Age environments is that there were no marked seasonal changes – it was mostly cold and wet the year-round. The Mississippi River flowed in multiple, braided channels within a vast expanse of gravel bars. Water from melting glaciers was too cold and turbulent to support fish or shellfish.


--In this case, it is known pretty much as a certainty that Clovis was not brought in by Asiatic .  colonists and therefore it was developed in the Misiisippi valley area. Some sites already known from Texas and Florida are ing older and therefore it is actually more likely that Clovis developed from colonists along the Gulf Coast area and moved inland: and this is possible by way of the Solutrean Crossing idea.