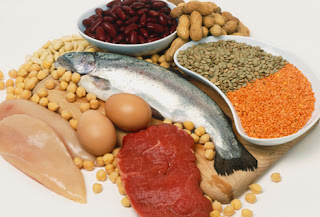 What this telling us loudly is that carbs never trigger hunger satiety at all. For that we must rely on proteins. This is an important insight that has been obscured to date.

My approach to sound diet and general good health is beginning to look better all the time as bit by bit the mountain of dietary misinformation slides away. Just knowing carbs are useful as a short term energy burst and is otherwise not satisfying is confirmation of long held suspicions.

The fact remains that one digestive system works hard to consume you meal of protein. It consumes a lot of energy and about a third of your oxygen budget. It really helps digestion if such a meal is followed by high energy sugars. This why we follow the pattern of a meal followed by sweets.

The take home however is to try and never eat a sweet without at least including a protein source.

(NaturalNews) It's no secret that overconsumption of calories, especially those from high calorie refined and processed carbohydrate junk foods is making America fat and taking nearly a decade off our natural lifespan. Since the early 1970's, our food supply has been infused with synthesized sweeteners such as high fructose corn syrup that is promptly metabolized to fat after ingestion. Nutrition experts have recommended including a natural protein source with each meal to slow glucose and carbohydrate absorption as an aid to healthy weight management.


Publishing in the journal Cell, researchers from the Universite de Lyon in France have now mapped out the signals that travel between your gut and your brain to generate the feeling of satiety after eating a protein-rich meal. Understanding this back and forth loop between the brain and gut may pave the way for future approaches in the treatment and prevention of obesity.

Proteins are found to signal the brain to prevent overeating, leading to obesity

Testing on a mouse model known to accurately simulate the digestive properties of humans, researchers were able to determine that proteins stimulate the secretion of glucose in the intestinal tract. The researchers charted a very complex series of steps that ultimately notifies the brain that we have eaten and are no longer in need of food. Digestion of fast-releasing carbohydrates or sugars does not trigger the same feedback mechanism, and encourages excess food consumption.


The critical finding reported by the research team was that proteins stimulate 'mu-opioid receptors' (MOR's, which also bind morphine) on nerves found in the walls of the portal vein, the major blood vessel that drains blood from the gut. Researchers found that peptides, the products of digested dietary proteins, block MOR's to curb appetite. The peptides send signals to the brain that are then transmitted back to the gut to stimulate the intestine to release glucose and suppress the desire to eat.


The lead study author, Dr. Gilles Mithieux concluded "These findings explain the satiety effect of dietary protein, which is a long-known but unexplained phenomenon... they provide a novel understanding of the control of food intake and of hunger sensations, which may offer novel approaches to treat obesity in the future." Nutritionists recommend consuming a natural source of protein with each meal and avoidance of sugary treats and refined carbohydrates, as well as between meal snacks. Good sources of protein include nuts, seeds, legumes and lean chicken, eggs and beef (always select free-range, organically fed choices and limit to no more than ten percent of total calories consumed) to aid weight management practices.


Learn more:
http://www.naturalnews.com/037057_protein_satiety_overeating.html#ixzz25WiyK93k
Posted by arclein at 12:00 AM