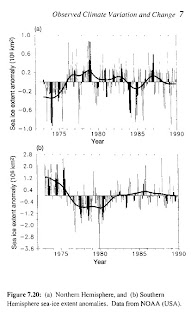 This is not a coincidence anymore but a near certainty that the increase in Arctic heat is naturally offset by a similar and generally equivalent decline in Antarctic heat.  This could only be achieved by a shift in oceanic circulation that shoves more warm surface waters north through the .  We surmised as much in past posts a few years back, but now this year’s behavior pretty well locks down the conjecture.

What matters is that the Northern hemisphere is naturally warmer and that this has absolutely nothing to do with greenhouse gas emissions whatsoever.

This also powerfully explains the onset of Little Ice Ages, which is what got me looking at ocean currents in the first place.  A sudden reversal of this tendency would flush cold surface waters into the with a vengeance.

Let us understand the processes here in play.  The reduction in the sea ice mass has naturally reduced the mass of fresh water and this is allowing the salinity to steadily increase in the .  At the same time the increase in heat transfer implies a greater influx of warm ocean water all of which increases the gross mass of the water in the .  It really becomes a reservoir of potential energy waiting to be released.

Simultaneously the opposite is occurring in the Antarctic in some way or the other.

For several reasons, I suspect that this cycle is part of a super cycle that is approximately one thousand years in length with a plausible eighty year normal cycle that steadily increases in intensity over several centuries before entering a series of declines culminating in a general collapse that hits the Northern Hemisphere with seriously cold conditions.  That is what the data at least suggests although developing confirming proxies will be a challenge.  We really need several thousand years of data with a high resolution confirmed in multiple locales.  Good luck on that.

http://stevengoddard.wordpress.com/2012/09/16/antarctic-ice-area-sets-another-record-nsidc-is-silent/
Day 256 Antarctic ice is the highest ever for the date, and the eighth highest daily reading ever recorded. All seven higher readings occurred during the third week of September, 2007 – the week of the previous Arctic record minimum. 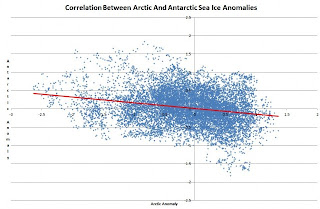 NSIDC does not mention the record Antarctic cold or ice on their web site, choosing inside to feature an article about global warming threatening penguins.

NSIDC does have a completely nonsensical discussion page explaining why Antarctic ice does not affect the climate.

Scientists monitor both Arctic and Antarctic sea ice, but Arctic sea ice is more significant to understanding global climate because much more Arctic ice remains through the summer months, reflecting sunlight and cooling the planet.

Nonsense. There is very little sunlight reaching the in September, and much more reaching Antarctic ice – because it is located at lower latitudes. Arctic ice took its big decline in mid-August, after the sun was already low in the sky.

Antarctic ice is nearing an all-time record high, and is above average everywhere.

Antarctica and the are reacting differently to climate change partly because of geographical differences. Antarctica is a continent surrounded by water, while the is an ocean surrounded by land. Wind and ocean currents around isolate the continent from global weather patterns, keeping it cold. In contrast, the is intimately linked with the climate systems around it, making it more sensitive to changes in climate.

Antarctic and ice move opposite each other. NSIDC`s dissonance about this is astonishing.

Does that date sound familiar? It should, because it was the same week as the previous post-1979 record low Arctic ice area.

Global warming theory requires that both poles warm, but we are seeing the exact opposite – the poles move opposite each other.

It is quite clear that the mechanism driving ice gain in Antarctica is the same one driving ice loss in the , but climate scientists refuse to think about this. Their brains are locked in CO2 stupidity hell.
Posted by arclein at 12:00 AM

Climate change is a normal, natural and absolutely un-stop-able reality of nature. Just like a vacuum or gross in-equilbrium (ie tall mountains vs deep oceans) there is no such thing as steady state.

On a perfectly round earth each and every sqaure inch of surface area receives an average of 12 hours of sunlight. At the poles it comes in chuncks of 6 months on 6 months off. At the equator its about 12 hours per day. In between the numbers are an almost perfect sinu-soldial (sic:) function. Which just like a pendulum moves (ie changes) the fastest near its average and spends most of it period trolling around the extremes.

Nothing new. Nothing special. Nothing wrong. Just food for thought and justification for research. Gerhard