Adult Orcas Need Their Mamas, Too 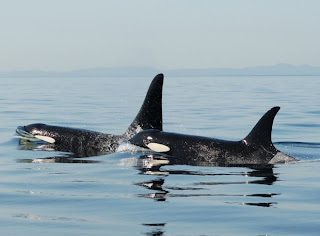 The fact that Orca families hang together as a matter of course is surprising and certainly not something commonly observed. That it rotates around a matriarch is not too surprising as we have the same thing with elephants. What is surprising is the retention of males in the pod. We have a prototypical hunter gatherer group operating continuously over decades and able to retain non reproductive seniors as part of their social structure.

It largely informs us as to why these matriarchs are valued when we factor in survival itself of the offspring. This is a good starting point for sociological modeling.

One presumes that something like this applies to other whale species also to varying degrees as well as the pilot whales mentioned. The more we understand whales, the less comfortable I am about any whale harvest. We more properly need to master the art of communication and develop beneficial partnerships with these creatures. Training them up should become possible.

Despite their fierce name, killer whales are really mama’s boys. For good reason: A study of almost 600 orcas, also known as killer whales, shows that having mom nearby significantly increases a son’s chances for survival. For the killer whale moms, too, more than just motherly love is at work: An innate drive to ensure she has as many descendants as possible may compel her to look out for her adult young. The evolutionary benefit of keeping watch over her descendants may help explain why female killer whales, like humans and pilot whale females, live decades past their reproductive prime.
The idea that mothers live much longer than needed for reproduction in order to help their children have more children dates back almost 50 years. Studies in hunter-gatherer and other societies show that having an older female around improves the survival of her descendents, including the grandchildren. Some researchers even argue that evolution favors menopause and a prolonged postreproductive lifespan—but that idea is controversial.

Killer whales can live into their 90s, but females stop reproducing in their 30s or 40s. They and pilot whales are the only two animal species, aside from humans, known to undergo menopause. Like humans, orcas live in complex social groups that include their sons and daughters. “They make good proxies for understanding” what the advantages of having human grandmothers might be, says Robert Pitman, a marine ecologist at the National Marine Fisheries Service in San Diego, California, who was not involved with the study.

Beginning in the 1970s, researchers started tracking the killer whales that lived in the Pacific Ocean off the coasts of Washington and British Columbia. The scientists took pictures of the whales’ dorsal fins—which are as unique as fingerprints—and used them to track the creatures’ births and deaths. By 2010, the survey included 589 individuals. Biologist Darren Croft from the University of Exeter in the United Kingdom and his colleagues analyzed these data using algorithms similar to those used by insurance companies to calculate life insurance premiums, and came up with the probability of survival of each whale at any age. They then did separate calculations for orcas whose mothers had died and for those who still had mothers.

Losing a mother, they found, was a liability, particularly for sons. Young males were three times more likely to die the year after their mother’s death than were males whose mothers were still around. Males over 30 years old were even more vulnerable: Their risk of death increased more than eightfold, Croft and his colleagues report today in Science. Young daughters did just fine after losing their moms, but older daughters were 2.7 times more likely to die. “For them, just like us, family matters,” Pitman says.

The researchers don’t know why having mothers around benefits the sons more than the daughters. It could be that mothers assist in hunting or fighting off aggressive whales. “It would be great if we knew more about orca social behavior, in particular just what benefits mothers are conferring,” notes Michael Cant, an evolutionary biologist at the University of Exeter who was not involved with the work. “But working on cetaceans is just enormously challenging, and this is very rare, hard-won data.”