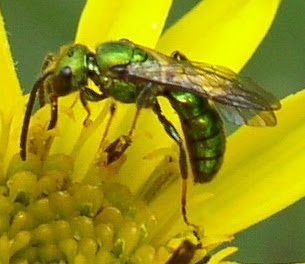 It is not just one pesticide or even several impacting the natural order. It has a great deal to do with preserving the wild and designing fields to be pollinator friendly. We used to think fence rows as wasted land. That is a mistake.

Strip farming with a living wild creating margins as well as field trees are all viable strategies. Tree crops specifically call for more rough understory than we are used to having. Quite simply the wild feeds the insects when the crop is not. Their population can then expand rapidly to take advantage of a sudden blooming because it is already dense enough.

Monoculture has naturally led to large fields sharply reducing the access of the wild pollinators this is what must be overcome.

The problems with pesticides cannot be ignored either but changing that is a political problem outside the control of the individual farmer except by outright avoidance and that is still not good enough for a reduced population of wasps to cover the crop. Thus introducing the wild through strips in an effective approach and if done properly, it may not even reduce general productivity.

http://www.seeddaily.com/reports/Bees_fruits_and_money_999.html
Two thirds of the crops humans use for food production and the majority of wild plant species depend on pollination by insects such as bees and hover-flies. This ecosystem service, however, provided by nature to humans for free, is increasingly failing. As an example, after 3000 years of sustainable agriculture, farmers in the Chinese province Sichuan have to pollinate apple flowers themselves by using pollination sticks - brushes made of chicken feathers and cigarette filter.

This is one small example of a problem occurring world-wide, including Europe. The work has been carried out in part part by STEP, an EU-funded Framework program Seven (FP7) project.

A global survey of several studies demonstrated a severe decline of pollinators and provision of pollination services in a wide range of intensively managed temperate and tropical agroecosystems. Considering that global crop production worth 153 billion Euros (for Europe 22 billion Euros) relies on insect pollination, the pollinators' decline has direct impact on the stability of food production and consumer prices, and might also have serious consequences for human health.

A decrease of fruit and vegetable availability could impact the health of consumers worldwide. The World Health Organisation (WHO) has set a lower limit of 400 grams per capita per day for fruit and vegetable consumption. Some studies demonstrated than even now more than 50% of the European households fall below this recommendation. In the case of pollinator declines and increasing food prices, this situation is very likely to worsen.

"Finally, wild pollinators provide an inestimable contribution to maintain the diversity of wild plants. Importantly, a wide range of pollinators with different preferences to flowers and different daily and seasonal activity is necessary to ensure pollination. Relying on managed honeybees only, which are also in decline by themselves, is a very risky strategy", said Prof. Ingolf Steffan-Dewenter from the University of Wurzburg, Germany.

"Therefore conservation of pollinators' habitats and implementation of agro-environmental practices to enhance wild plants resources and nesting sites for bees in agricultural landscapes are vitally important!"
Posted by arclein at 12:00 AM