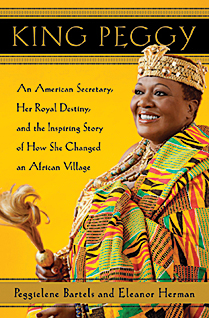 I recently completed this fascinating book that takes us into the heart of West Africa.

Long ago, I came to the conclusion that the social milieu of West Africa made it impossible to succeed generally with the men but that working with strong women was a much better proposition. Long term that is certain to change but the problems in Africa are now.

What king Peggy discovered was that the money actually existed to support a modest level of development but that every nickel was been outright stolen in order to support a small clique of men who simply wasted it. Yet society put up with it.

So began the slow and steady hand of real progress.

A think that aid providers need to locate their king Peggy and outright back them to the hilt. A thriving community of several thousand people resulting from nothing more that good governance will put the wind up in every other community anywhere close. In King Peggy's case she attracted a church to sponsor her community and they have taken on the burden of establishing educational support.

As the community begins to thrive, the rest will quickly follow.

An American secretary, her royal destiny, and the inspiring story of how she changed an African village

http://www2.macleans.ca/2012/03/01/review-king-peggy-an-american-secretary-her-royal-destiny-and-the-inspiring-story-of-how-she-changed-an-african-village/
Originally from Africa, Peggielene Bartels spent most of her working life as an office administrator at the Ghanaian Embassy in Washington. Then the phone rang one morning at 4 a.m. and a relative informed Peggy she had been chosen to be the “lady king” of her Ghanaian village, Otaum. The idea was absurd to Peggy, although she was from the royal Ebiradze bloodline. Prompted by a dream, she reluctantly accepted the crown and began shuttling back and forth to Africa, where a dilapidated palace awaited repair. King Peggy is the funny, wide-eyed account of her struggle to overcome sexism, systemic corruption and poverty without losing her will to lead or the love of her 7,000 subjects.

In Africa, Peggy says, women aid and abet scamming men with their own timidity and deference. Not Peggy. Her American notions of equality give her the strength to roust corrupt elders and a scheming priest. She reclaims fishing and land-sale taxes to modernize the village. Appointing a trustworthy regent, she uses her own money to rebuild the palace and restore respect to the throne. One by one, she tackles her people’s problems: no running water, no school, no decent road, no ambulance and no hospital beds. Peggy’s story hits the Washington newspapers and attracts African-American benefactors, who sheepishly visit to discover their roots.

Amongst the episodes of palace intrigue, Peggy makes astute comparisons between her village life and her urban existence in Washington, where she eats alone every night in her tiny condo. In Ghana, she shares a bed with her cousin and is constantly surrounded by squabbling relatives. It’s a joyful chaos that nourishes her soul. Divorced with no children, Peggy finds new purpose as a lady king. Co-author Herman says her interest in Africa came from the fiction of Alexander McCall Smith; she thinks she has met in Peggy a real-life Mma Ramotswe, and readers will quickly agree.