The Hunt to Unlock Oil Sands 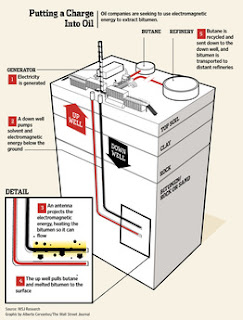 Extracting heavy oil has always been a challenge but I have watched decades of effort, step by painfully slow step succeed. I have no doubt that we will ultimately succeed in recovering all of it if we desire it.

It is enough to know that all oil runs like water after around 170 degrees Fahrenheit. That is why SAGD will extract as high as 70% of contained oil in its steam chamber.

Although I personally think we are on the cusp of exiting the oil age, the process itself will still take a couple of decades. It will be kept alive by the convenience of paid for technology and a legacy of engineering flexibility and know how. Recall that the steam engine is still used in spots and needed a full generation to be replaced in its time. In fairness, a thermal plant is a steam engine.

In the meantime, Canada's real oil reserves are equal to twice all the oil ever burned, and that is what we know about and can access easily.


The Hunt to Unlock Oil Sands

In Canada, Radiowaves and Heating Coils Are Among Efforts Used to Extract Sticky Petroleum From Rock

Now oil companies here are experimenting with technologies that could unlock even more reserves from what is some of the world's heaviest and stickiest petroleum. The new technologies could also drive down the cost of producing oil in Canada.

One consortium aims to get oil flowing to the surface by sending radio waves from huge antennae pushed through wells deep underground—adopting technology first developed for the U.S. government to eavesdrop on underground bunkers.

Another company is working on inserting electrical heating coils into wells to melt the oil, while other firms are tinkering with petroleum-based solvents they hope to pump into wells to get more oil out.

All the experimentation is aimed at improving a standard method of oil-sands extraction: so-called steam-assisted gravity drainage, or SAGD.

(That is pronounced "Sag-Dee" in industry parlance.) That technology is itself a recent breakthrough—essentially injecting superheated steam into wells to heat deposits of sticky bitumen, a form of petroleum, making it liquid enough to be pumped to the surface.

The technology was commercialized in Canada's northern Alberta province early last decade, and helped enable oil companies to tap deeper oil-sands reserves. For decades, most oil-sands development had more in common with strip mining than conventional oil drilling. Companies dig up a mix of bitumen and quartz sand and wash the sludge down with hot water to extract the bitumen.

But those reserves are only a 10th of the 1.7 trillion barrels of bitumen found in Canada. Alberta's Energy Resources Conservation Board estimates there are also more than 400 billion barrels of bitumen trapped in carbonate rock formations in Alberta, mostly in a large formation called the Grosmont that stretches across the center of the province.

"If we postulated that 25% of that can be recovered, Canada could move to No. 1" in world oil reserves, said Glen Schmidt, chief executive of privately owned Calgary energy-technology company Laricina Energy Ltd.

Laricina is one of several companies including Royal Dutch Shell RDSB.LN -1.47% PLC,Athabasca Oil Corp. ATH.T -1.38% and Husky Energy Inc. HSE.T -1.70% that are adapting SAGD technology to rock formations like the Grosmont and trying out new enhancements to cut the use of fresh water and energy, which will bring down the overall cost and greenhouse gas emissions of operations there.

While SAGD doesn't gobble up as much surface area as conventional oil-sands mining, it still uses lots of energy and water. That makes it expensive and carries a big greenhouse-gas footprint.

Basic SAGD technology uses two horizontal wells drilled parallel to each other, one above the other. Natural gas is used to boil water into steam, which is injected underground into the top well. The steam heats and softens the bitumen, separating it from the sand, causing it to drip down to the bottom well, which sucks it back up.

Laricina is part of a consortium including large Canadian energy companies Suncor Energy Inc. SU -2.34% and Nexen Inc. NXY +0.15% that is testing replacing the steam with an antenna, developed by Melbourne, Fla., telecommunications-equipment manufacturer Harris Corp. HRS -1.03% After being fed down a well, the antenna blasts out heat, warming the bitumen.

Mr. Schmidt said early tests show the technology could cut energy use by 40%. It also removes the high upfront costs of water treatment and steam generation facilities. That could cut the cost the cost of SAGD production, which is currently around $55 to $65 a barrel for most projects.

"If we eliminate steam, we eliminate potentially 60% of the cost of a facility, which is huge," he said. The technology could be ready as soon as 2019.

The antenna project got started back in 2008, when Harris was working on technology aimed at improving underground listening capabilities for the U.S. Government.

"We were trying to gain access to underground facilities, underground locations, so we had to bring in people who had specialties in horizontal drilling," Wes Covell, a Harris vice president, said. He declined to be more specific about what he said was a classified project.

Harris executives had an epiphany when the drilling experts mentioned the Canadian oil industry's problem of getting energy-efficient heat to travel down horizontal wells into the bitumen reservoirs deep underground.

Athabasca Oil, another big Canadian oil producer, is testing a similar electric-heating technology to unlock bitumen from carbonate rock. The company inserts electric coils, made of the same material as heating elements on a stovetop, into wells. If tests are successful, Athabasca plans to start a commercial project for its technology by 2018.

Laricina and several other companies are also testing adding light hydrocarbon solvents to steam in SAGD wells to boost output. The solvent dilutes bitumen, making it easier to flow.

Cenovus Energy ICVE -1.72%nc.  is working on a solvent project that could be rolled out commercially in 2017.

Jason Abbate, head of production engineering at one of Cenovus' projects, said solvent technology could increase oil production rates by up to 25% and cut the amount of steam and natural gas use by up to 30%. It could also improve the percentage of oil that producers can capture from bitumen deposits.