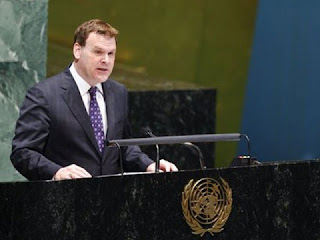 First, few Canadians, let alone others have understood that for the past century, ’s foreign policy has been remarkably prescient.  Yes they did manage to sometimes cherry pick the risks accepted.  Yet there is a level of actual wisdom and effectiveness rarely noted with say the and many others.  Thus I respect particularly unexplainable moves when made. This is one of those.

The suddenness of this particular action without any attempt to use the threat for applying diplomatic pressure is seriously troubling.  Besides which while the has opened a gap in its relationship with , has stepped in and strongly closed the gap.  They are now at the top of any list of trusted friends and allies of the State of Israel.  is today the most likely country to have an inside track on Israeli intentions regarding .

In short, this is Red Flag!

At present we have zero evidence of prepositioning of Israeli Assets of any kind, so in fact nothing way well be happening.  Yet smashing up ’s nuclear industry is ultimately the only viable option outside a real diplomatic solution.  We are already at war as the Stuxnet Virus showed and the string of assassinations of nuclear scientists demonstrated.

In the meantime, is hugely isolated and cannot call on meaningful support from anyone let alone its neighbors.  Thus a successful surgical strike, if it can be achieved is a plausible option although it is certain to be multi targeted and fraught with huge risk.  Most importantly, such a strike would postpone an actual confrontation for at least a decade if not forever and that was good enough to deal with Saddam.

It is again time to be nervous.  There is simply too many opportunities for the calculations war to be played out.

OTTAWA - Foreign Affairs Minister John Baird delivered a diplomatic bolt from the blue Friday, abruptly and unexpectedly severing ties with Iran, shuttering 's embassy there and giving Iranian diplomats in five days to get out of the country.

Baird rattled off a litany of long-standing grievances with Iran during a news conference in the Russian city of Vladivostok, where he and Prime Minister Stephen Harper are participating in this weekend's meeting of Asia Pacific Co-operation leaders.

"The Iranian regime has shown blatant disregard for the Convention and its guarantee of protection for diplomatic personnel," said Baird, adding that the government on Friday formally listed as a state sponsor of terrorism.

"Under the circumstances, can no longer maintain a diplomatic presence in . Our diplomats serve as civilians, and their safety is our No. 1 priority."

Diplomatic relations between Canada and Iran have been growing ever more strained in recent years, but there was no immediately apparent catalyst for the decision to cut off all ties.

Officials at the Iranian embassy in did not return calls Friday. People showed up outside the imposing red brick building seeking passport-related services, only to learn from a note on the door that the embassy had closed up shop.

"Because of the hostile decision by the government of Canada, the embassy of the Islamic Republic of Iran in Ottawa is closed and has no choice but to stop providing any consular services for its dear citizens," said the note, written in Persian.

Ordinary Canadians were also being warned Friday to avoid any travel to .

In his news conference, Baird justified the move by reciting familiar complaints that and others around the world have been making for months, if not years.

He cited an eight-month-old attack on 's embassy in as evidence that 's own diplomats there are in danger.

He also accused of providing military assistance to the Assad regime in war-riven , failing to comply with UN resolutions regarding its nuclear program, and "materially" supporting terrorist groups.
And, for good measure, he accused of "routinely" threatening the existence of , engaging in racist anti-Semitic rhetoric and incitement to genocide, and called the country "among the world’s worst violators of human rights."

"," he said, "views the government of as the most significant threat to global peace and security in the world today."

The Opposition New Democrats called the move irresponsible and bizarre.

The NDP Foreign Affairs' critic Paul Dewar noted that Baird and Harper should be using their trip to to pressure that government to exert its influence over .

But instead, Dewar said, has removed itself as a potential player in soothing tensions over the issue.

"What this is showing the world is that when it comes to engagement and trying to work on these difficult problems that require robust diplomacy, we're just walking away," Dewar said.

"I don't see how this is going to help. It might be good rhetoric but it's not good diplomacy."

The timing of the move also left experts puzzled.

"There are many issues involved here — human rights abuses, the nuclear ambitions, the support for Syria — but in terms of why now, and why not six months ago, why not a year ago, there's no answer to that," said Paul Sedra, a history professor at Simon Fraser University.

"So I can't really see the rationale behind taking the move and this point and I think that really reduces the effectiveness of the step."

"Certainly, the Islamic regime is a regime that is difficult to deal with," Hassan-Yari said.

"This is a regime that treats its people very, very wrong. This is a regime that, in the past, has shown its ability to disregard international law. But to conclude that it is the greatest threat, the more imminent, peace and security, in my opinion, it's a bit far to go."

The decision to sever ties came amid revelations of a sharp argument last month between the Israeli prime minister and a senior official over .

Reports in the and Israeli media suggest that Israeli Prime Minister Benjamin Netanyahu lost his temper with a senior congressman during a meeting last month over what sees as a lack of serious American action against 's nuclear program.

The West believes is pursuing a nuclear weapons program, but denies the charge. It says it only wants to develop peaceful nuclear energy.

"The determination shown by is of great importance in order for the Iranians to understand that they cannot go on with their race toward nuclear arms," the prime minister said in a statement.

Mehr, a semi-official news agency in Iran, said the Canadian decision was "in accord with the hostile policy" against and that it "served Zionists."

There has been speculation for months that could move unilaterally to attack 's nuclear capabilities; Iranian President Mahmoud Ahmadinejad recently referred to the Jewish state as a tumour that would soon be excised.

Baird was careful to make clear wasn't aware of a pending military action — "Unequivocally, we have no information about a military strike on ," he said — but Sedra mused nonetheless about what exactly the Canadian government knows.

"If has heard something from the Israelis that something is imminent, I think that's a very, very significant cause for concern."

's relations with have been iffy since the 1979 Islamic Revolution. After Canadians spirited American diplomats out of in 1980 during the post-revolution hostage crisis, the Canadian embassy was closed for eight years.

The two countries slowly moved back to normal diplomatic relations with an exchange of ambassadors in 1996.

But the relationship chilled in 2003 after Zahra Kazemi, a freelance photographer with dual Canadian-Iranian citizenship, was killed in custody in in what described as a state-sanctioned murder. recalled its ambassador.

— with files from Mike Blanchfield in and The Associated Press