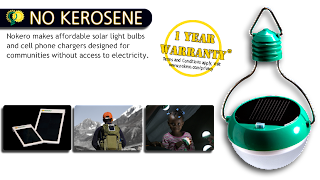 This is a problem that has long been looking for a solution at the proper price point. Quite rightly, the economic argument is already there in terms of a divertable expense. That price point now appears to have been met and appropriate product is appearing on the shelves.

In a world were a handful of men can muck together a basic home out of local materials in the wild and heating is never the issue, getting communication and lighting at night is a huge leg up. These technologies will also support battery charging for the cell phones.

What is really impressive is that the modern housing we expect for modernization is generally still in these peoples future as is proper access to healthcare, education and much else we take for granted.

Two thirds of the rural population in developing countries are without electricity. This leaves limited options for lighting.


Research has shown that basic oil lamps typically produce just 1% of the light of a 100W light bulb.
Nokero is one of many companies making LED solar powered lights and solar powered mobile phone chargers and battery chargers. The N200 is about 13.5 lumens on high, and about 5 lumens on low. DBT 1.9 hours when tested with 5000 watt-hrs/m^2-Day on hi setting, 6.6 hours on low. The battery will last for approximately 1.5 years, and can be replaced to keep the bulb in operation. The Nokero N200 can withstand rain, but is not waterproof and cannot be submerged. Product performance varies based on intensity of sunlight and duration of charging time.


The N200 lantern made by another American firm, Nokero (for “no kerosene”), has a design inspired by a light bulb, and costs about $15. It worked well for cooking, cleaning and sitting around a table, but was deemed less suitable for studying. The Solar Muscle, a solar lamp made by Flexiway, can be used as a desk light. Its compact, square design, with a solar panel on one side and LEDs on the other, also allows several lamps to be snapped together to make a larger panel. The square design arose after an earlier, circular version was mistaken for a landmine, says James Fraser of Flexiway. The firm can pack 2,750 of its $10 lamps in a cubic metre—a plus in countries where transport is expensive. They are being distributed by NGOs in Papua New Guinea and several African countries.


The best solar lamp among those tested was the Sun King, produced by an Indian company, Greenlight Planet. It was purchased off the shelf from an African supermarket for $24. The Sun King’s almost dazzling light was appreciated by users, as was its seemingly unbreakable design. The awkward-looking wire stand worked well. The lamp’s only drawback was that its solar panel is separate, rather than being built into the lamp.

Economist - the mobile phone has been quickly improving the lives of the world’s poorest people for the last decade.

For the next decade the mobile phone will be joined by the solar-powered lamp, made up of a few light-emitting diodes (LEDs), a solar panel and a small rechargeable battery, encased in a durable plastic shell. Just as the spread of mobile phones in poor countries has transformed lives and boosted economic activity, solar lighting is poised to improve incomes, educational attainment and health across the developing world.


Phones spread quickly because they provided a substitute for travel and poor infrastructure, helped traders find better prices and boosted entrepreneurship. For a fisherman or a farmer, buying a mobile phone made sense because it paid for itself within a few months. The economic case for solar lighting is even clearer: buying a lamp that charges in the sun during the day, and then produces light at night, can eliminate spending on the kerosene that fuels conventional lamps. Of the 1.4 billion people without access to grid electricity, most live in equatorial latitudes where the sun sets quickly and there is only a brief period of twilight. But solar lamps work anywhere the sun shines, even in places that are off the grid, or where grid power is expensive or unreliable.


The potential savings are huge. According to a recent study by the International Finance Corporation, an arm of the World Bank, $10 billion a year is spent on kerosene in sub-Saharan Africa alone to illuminate homes, workplaces and community areas. Globally, the figure has been put at $36 billion. Flexiway, an Australian-Argentine maker of solar lamps, found in its trials in Tanzania that households often spent more than 10% of their income on kerosene, and other studies have put the figure as high as 25%. And kerosene does not merely eat up household income that could be spent on other things. It is also dangerous. Kerosene lanterns, a century-old technology, are fire hazards. The wicks smoke, the glass cracks, and the light may be too weak to read by. The World Health Organisation says the fine particles in kerosene fumes cause chronic pulmonary disease. Burning kerosene also produces climate-changing carbon-dioxide emissions.


Demand for cheap, efficient lighting is only going to grow. Even in the best-case scenarios, the number of people without electricity will tick up to 1.5 billion by 2030, as population growth outstrips electrification. The rate of innovation in delivery models, technology and design, in both rich and poor countries, suggests a bright future for solar lamps—and a slow dimming of kerosene’s flame.

A good kerosine lamp is very easy to read by. I live in Amish country and have never heard of a home burning down from a kerosine lamp. I am sure it happens but it is fairly rare...

This is some kind of new innovation..Great solar lamps for energy saving..

Panel/Ceiling lighting style is a fixture, that is installed into a hollow opening in a ceiling .When installed it appears to have light shining from a hole in the ceiling, concentrating the light in a downward direction as a broad floodlight.
For More Information visit: LED Panel Lights,LED Tube Lights,LED Strip Lights,LED Lighting Devices

light consuming lamp so nice your lamp much more light and so beautiful to see. i like to buy!
Led Lighting

This is a great product heaving more powerful light and great features. Thanks for posting on this wonderful blog. led lighting profiles