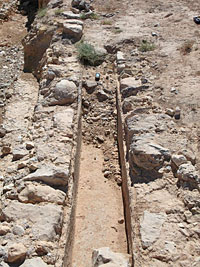 What is oft forgotten is that every ruin has a vast support region close by that existed even in the desert. Only the Romans transported grain over vast distances during antiquity. Thus a city like Petra already distant from other centers needed a significant local agriculture. That it was hydraulic is no surprise.

That also implies that it was constructed over centuries and why it never quickly recovered once destroyed.

It also shows us how easy it is to underestimate ancient populations throughout the middle East and how untrustworthy assumptions can be in desert countries. A densely populated valley bottom can blow away with an interruption of the water supply. This happened many times and usually because of barbarian invasion, the last been the Mongols.

Since then a feudalistic mind set obstructed the necessary local investment. Thus the Levant became a poorly populated waste easily seized by the Europeans and their inheritors.


LAND NEAR PETRA WAS A GREEN OASIS IN THE PAST

http://www.pasthorizonspr.com/index.php/archives/09/2012/land-near-petra-was-a-green-oasis-in-the-past
About 15 km to the east of the ancient city of Petra, archaeologists from the University of Leiden have discovered an impressive network of ancient water conservation measures and irrigated field systems.

Water management in the desert

“A huge green oasis” is how Dr. Ir. Mark Driessen describes it. “That’s what this part of the desert must have looked like in past times.”

In Antiquity, an ingenious system of underground canals, hacked out of the limestone bedrock, in addition to specially built aqueducts and reservoirs with capacities of millions of litres of water, transformed this marginal region into a complex man-made landscape. This is a fantastic example of ancient water-management technology, constructed to irrigate the surrounding terraced field systems.

Dr. Driessen, director of the Udhruh Archaeological Project, said, “Thanks to the enthusiasm and hard work of the students and staff of the Faculty of Archaeology we have succeeded in linking the diverse elements of this complex which lie scattered over an immense area of many square kilometres, thereby closing the gaps in this fascinating archaeological puzzle’.

It is possible that parts of this agricultural system – which was certainly exploited in the 6th century CE– were already well established at least 2000 years ago. Analysis of construction mortar and other artefacts such as pottery will hopefully provide a firmer date for the system.

The Udhruh Archaeological Project  started in 2011 as a cooperative project between the Faculty of Archaeology of the University of Leiden and the Petra College for Tourism and Archaeology of the Al-Hussein Bin Talal University. Surveys carried out in June and July in and around the Roman fort of Udhruh have resulted in many more interesting discoveries.

Exploration of the 4.7 hectare Roman fort of Udhruh shows that this is probably the most intact fort of the entire Roman Empire.

In several places the outer walls and towers still stand several metres high and the interior buildings lie under a layer of construction debris more than 2.5 metres thick. The quarries that provided stone for fort construction have been extensively surveyed. They cover an area of several hectares and are amongst the largest to be identified in the Roman provinces.

The site of Udhruh most probably played an important logistical role in the trade of myrrh and frankincense through which the Nabateans acquired their wealth, and their capital Petra its prosperity. The archaeological research aims of the project deal with the development of this trade and the transformation of the landscape through Nabatean, Roman-Byzantine times into the early Islamic periods.

Greening a now barren desert is only part of the technological benefits that could have uses today. Udhruh offers interesting possibilities for applied archaeology and interdisciplinary research related to modern sustainable agricultural use and community-based tourism in which the local peoples participate and benefit.

The South Jordan survey will be continued in May and June 2013.
Posted by arclein at 12:00 AM