This actually is a huge deal.

Nothing here is been said regarding chemical erosion which is a serious issue even for steel pipes. However, the range of epoxies available and the industrial experience available suggest to me that only the worst situations will remain intractable. The reason we use stainless steel in a chemical facility is because it will at least resist erosion for a while. I also presume by now that basaltic lined pipes dominate those applications.

Water mains and sewage systems all will be easy. Since most such infrastructure is all looking for a better solution this is very timely.

Way more important however are gas and oil pipes. The market continues to expend well ahead of our present ability to produce competent welders. Welding a proper seam on a pipeline is not a job for the ill trained. Which is why they are so well paid.

This approach reduces the task to the semi skilled level and it simply becomes a lot more like the present plumbing industry. Remember when they were effectively pipe fitters?

The key take home is that our entire industrial plant is organized around piping and installation is labor intensive and actually generally difficult. These pipes will be even open to manhandling often enough to make a big difference. 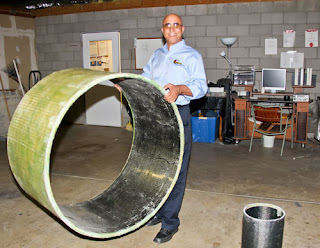 Mo Ehsani, Professor Emeritus of Civil Engineering at the University of Arizona, has designed a new, lightweight underground pipe he says could transform the pipeline construction industry.

Instead of conventional concrete or steel, Ehsani's new pipe consists of a central layer of lightweight plastic honeycomb, similar to that used in the aerospace industry, sandwiched between layers of resin-saturated carbon fiber fabric.

In combination, these materials are as strong, or stronger, than conventional steel and concrete pipes, which are time-consuming and expensive to manufacture and transport.

Concrete and steel pipes are built in short sections to fit on standard 18-wheel trucks, but Ehsani's new pipe can be built onsite as a single section of virtually infinite length, hence the product name InfinitPipe.

The heavy industrial manufacturing processes, long-distance trucking, and leak-prone joints used in steel and concrete pipe construction exact a heavy toll on the environment, not to mention bottom line, which is why Ehsani's company, QuakeWrap, is marketing InfinitPipe as the world's first "green" pipe.

"There are really two aspects to this invention," Ehsani said. "One is this new type of lightweight honeycomb pipe. Second is our ability to give clients an endless or infinite pipe, without a joint. That is a big, big breakthrough in the pipeline industry that has implications for natural gas, oil, water, and sewer pipes."

A literally infinite pipe is, of course, not feasible, but Ehsani's method of manufacturing could create extremely long sections of joint-free pipe. "We could make a section a mile long," he said. "Of course, every thousand feet or so, you'd need an expansion joint so the pipe can breathe, but this would certainly not be the same concern we have today, where we have to put a joint every 20 feet."

The secret of producing virtually endless pipe sections lies in the manufacturing methodology. Ehsani wraps the various layers of carbon fabric and honeycomb around a mandrel, a kind of tubular mold with a cross-sectional shape that matches the pipe's internal cross-section, which is typically, but not always, circular.

After testing this manufacturing method, Ehsani had a "eureka" moment when he realized that the finished pipe could be partially slid off the mandrel, and more pipe could be added to the section of pipe remaining on the mandrel. "I thought, why don't we just slip this off of the mandrel and continue making this pipe?" Ehsani said. "Never stop."

Carbon fiber, resin and aerospace honeycomb are all very light materials that can be transported at a fraction of the cost of conventional prefabricated steel and concrete pipe, and Ehsani said he is looking for partners to develop an automated mobile unit to make the pipes onsite.

"Imagine having a truck with a mandrel in the back," Ehsani said. "You start making the pipe on, say, a 20-foot mandrel, and pull off 18 feet so you have two feet left on the mandrel," he said. "Then you just move the truck forward and drop the pipe in the ground, and keep adding pipe."

"Suppose you have a pipeline project in a developing nation," Ehsani said. "You could ship the raw materials to the workers there and they could make this pipe in their own village. No matter what size or shape they want, all they need to do is build a mandrel and make the pipe on the spot. We would be making it with local people under our supervision."

Closer to home, Ehsani cites the recently awarded $10.7 million contract to build the first four miles of pipe for the billion dollar Navajo-Gallup water supply project, which involves building a 280-mile pipeline to supply water to more than 40 Navajo communities in New Mexico and Arizona.

"The contractor is making a 42-inch diameter pipe for four miles, which works out to $507 a foot," Ehsani said. "Really, we could have that pipe built faster with the help of local labor and put it in place sooner, without having to wait to order it and ship it, and all of that expense."

Ehsani said he didn't really set out to turn pipeline construction on its head, but the project took on a life of its own. "We developed this originally with the intention of fixing existing pipes," he said. "Then as we started getting into this thing I realized it could be a real game-changing breakthrough technology."

The breakthrough did not happen overnight. In the late 1980s, Ehsani and Hamid Saadatmanesh, both of the UA department of civil engineering and engineering mechanics, pioneered research into repairing and retrofitting bridges and buildings using fiber-reinforced polymers, so the technology is well established.

"There's a lot of history on these materials," Ehsani said, which has enabled him to refine the pipe manufacturing process to use smaller amounts of better quality materials. "Because we're using our materials in a smart manner, we can afford to use the higher end material," Ehsani said. "So instead of cheaper glass fabric, we use carbon. Instead of polyester resin, we use epoxy. Because we don't have a solid core, we can afford to put the expensive material on the skin."

If Ehsani's concept for mobile pipe manufacture using lightweight components takes off, he envisions an industry freed from the shackles of heavy industrial plant. "As a business model, a company that wants to get into pipeline manufacturing with one of these mobile trucks could have a factory anywhere in the world," he said. "You could be doing a job in Hawaii today and next week be working in Panama. You're no longer limited by where your factory is."

Ehsani will present a paper on his new pipe technology at the American Society of Civil EngineersPipelines 2012 Conference, Aug. 19-22 in Miami.

This is not Ehsani's first invention related to pipelines. Last year we reported on his PipeMedic laminates that are used as industrial stents to repair deteriorated pipes [UA Engineer's Superlaminates are Industrial Surgery for Failing Infrastructure]. The first application of that product, to repair a high-pressure gas pipeline in New Jersey, received Trenchless Technology magazine's 2011 project of the year award.