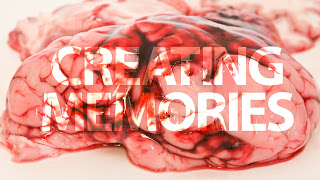 This suddenly allows us to watch a memory been recorded and stored as it happens and before it is acted on to be set up in short term memory or into long term memory. We even have a sense of how the brain tells time or at least experiences the time decay of memory. Hell CMOS!

We have been tracking the slow and tortuous advances in our understanding of brain functionality. At some point we will be able to see information formed and recognized and ultimately deployed through the brain. It will be an awesome process. Once well understood, we will also understand how specific genetic modification can augment that brain.

We certainly have strong indications that augmentation is practiced among advanced space-faring societies but it could well be that we are expected to do it all ourselves anyway. Evolution may have produced the potential for augmentation but that took millions of years. We will not.

I find this extremely hard to believe, but according to new research published in Nature Neuroscience, scientists have invented a method to induce memories in brains for the first time in history.

The study—published by Case Western Reserve University School of Medicine's Professor of Neurosciences and Physiology/Biophysics Ben Strowbridge, PhD, and MD/PhD student Robert A. Hyde—shows a method to store different types of short-term memories, which they have successfully tested in brain tissue stored in vitro.

Titled "Mnemonic Representations of Transient Stimuli and Temporal Sequences in Rodent Hippocampus In Vitro", their paper describes how they used a piece of mouse brain tissue to form the necessary circuits to record a short-term declarative memory. This type of memory can be something like names, places and events.

These neural circuits—located in the hippocampus—retained the memory from different stimuli for ten seconds. The researchers were able to observe the recording of these artificial memories by tracing the activity of the brain cells. According to Hyde, "the type of activity we triggered in isolated brain sections was similar to what other researchers have demonstrated in monkeys taught to perform short-term memory tasks. Both types of memory-related activity changes typically lasted for 5-10 seconds."
Uncanny. The rat brain in vitro was even able to remember different sequences of events.

The objective of the study is to better understand how short-term memories form in our brains. According to Doctor Strowbridge, "this is the first time anyone has found a way to store information over seconds about both temporal sequences and stimulus patterns directly in brain tissue. This paves the way for future research to identify the specific brain circuits that allow us to form short-term memories." Their research would also help in the fight against diseases like Alzheimer's or Parkinson's disease.