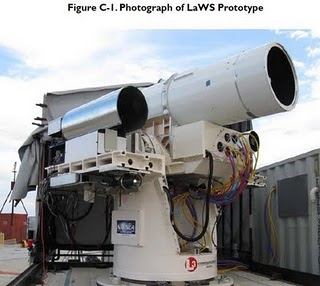 This tells us that the naval program is on the way to been real.  The advantages are overwhelming for close in support.  It provides an automatic shield that any incoming projectile must penetrate.  An attack is forced to deliver overwhelming volume and then actually hit the target.

With the likely development of direct fusion power technology we have a potentially compact weapon system.

Such a system could be lofted into space and used as a platform to suppress any air force or adventurer.  It certainly could be used there to prevent  a missile launch.  This was a star-wars weapon system that was less than thirty years before its time.

Summary of lasers for weapons 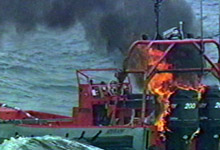 Navy Shipboard Lasers for Surface, Air, and Missile Defense: Background and Issues for Congress (53 pages)
Department of Defense (DOD) development work on high-energy military lasers, which has been underway for decades, has reached the point where lasers capable of countering certain surface and air targets at ranges of about a mile could be made ready for installation on Navy surface ships over the next few years. More powerful shipboard lasers, which could become ready for installation in subsequent years, could provide Navy surface ships with an ability to counter a wider range of surface and air targets at ranges of up to about 10 miles. These more powerful lasers might, among other things, provide Navy surface ships with a terminal-defense capability against certain ballistic missiles, including the anti-ship ballistic missile (ASBM) that is believed to be developing.

The Navy and DOD are developing three principal types of lasers for potential use on Navy surface ships—fiber solid state lasers (SSLs), slab SSLs, and free electron lasers (FELs). The Navy’s fiber SSL prototype demonstrator is called the Laser Weapon System (LaWS). Among DOD’s multiple efforts to develop slab SSLs for military use is the Maritime Laser Demonstration (MLD), a prototype laser weapon developed as a rapid demonstration project. The Navy has developed a lower-power FEL prototype and is now developing a prototype with scaled-up power. These lasers differ in terms of their relative merits as potential shipboard weapons.


For purposes of this report, the term “short range” generally refers to ranges of one or two nautical miles, while references to longer ranges or extended ranges refer to ranges of up to about 10 nautical miles. Lasers are one type of directed energy weapon (DEW); other DEWs include microwave weapons and millimeter wave weapons.


The Navy recently succeeded in using a ship based laser to disable a small boat. 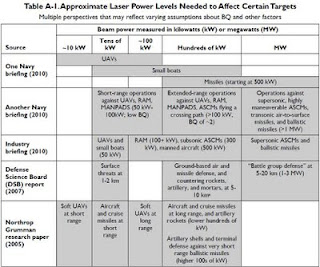 * Shipboard lasers could counter surface, air, and ballistic missile targets at a low marginal cost per shot. The shipboard fuel needed to generate the electricity for firing an electrically powered laser would cost less than a dollar per shot (some sources express the cost in pennies per shot). In contrast, the Navy’s short-range air-defense interceptor missiles cost roughly $800,000 to $1.4 million each, and its longer-range air- and missile defense interceptor missiles cost several million dollars each


* Deep magazine. Navy surface ships can carry finite numbers of interceptor
missiles in their missile launch tubes. In contrast, an electrically powered laser can be fired again and again, as long as the ship has fuel to generate electricity (and sufficient cooling capacity to remove waste heat from the laser).

* Line of sight.
* Atmospheric absorption, scattering, and turbulence; not an all-weather solution.
* Thermal blooming. A laser that continues firing in the same exact direction for a certain amount of time can heat up the air it is passing through, which in turn can defocus the laser beam, reducing its ability to disable the intended target.
* Saturation attacks. Since a laser can attack only one target at a time, requires several seconds to disable it, and several more seconds to be redirected to the next target, a laser can disable only so many targets within a given period of time. A mitigating solution is to install more than one laser.
* Hardened targets and countermeasures. Less-powerful lasers—that is, lasers with beam powers measured in kilowatts (kW) rather than megawatts (MW)—can have less effectiveness against targets that incorporate shielding, ablative material, or highly reflective surfaces, or that rotate rapidly
* Risk of collateral damage to aircraft and satellites.

• atmospheric absorption, scattering, and turbulence,
• jitter—the degree to which the spot of laser light jumps around on the surface of the target due to vibration or other movement of the laser system, and
• target design features, which can affect a target’s susceptibility to laser damage.

The following conclusions might be drawn from the table regarding approximate laser power levels needed to affect certain targets:

• Lasers with a power level of about 10 kW might be able to counter some UAVs at short range, particularly “soft” UAVs (i.e., those with design features that make them particularly susceptible to laser damage).

• Lasers with power levels in the tens of kilowatts could have more capability for countering UAVs, and could counter at least some small boats as well.

• Lasers with power levels in the hundreds of kilowatts could have greater ability for countering targets mentioned above, and could also counter manned aircraft and some missiles.

In addition to the points above, one Navy briefing stated that lasers with power levels above 300 kW could permit a ship to defend not only itself, but other ships in the area as well (a capability referred to as area defense or escort operations or battle group operations).

This generalized vision can be summarized as follows (text based on a
Navy briefing slide):

Current Navy—LaWs:
• 50 kw to 100 kW fiber laser with a low beam quality (BQ) and a beam director with a diameter of about 60 cm (about 23.6 inches);
• short-range operations against targets such as EO sensors, small boats, UAVs; RAM; and man-portable air defense systems (or MANPADs— shoulder-fired surface-to-air missiles);
• potential IOC around FY2017;

Next Navy:
• 100 kW laser with a BQ of about 2 and use of adaptive optics;
• Extended-range operations against targets such as EO sensors, small boats, UAVs, RAM, and MANPADs, as well as ASCMs that are flying on a crossing path (rather than at the ship);

Navy After Next—FEL:
• 1 MW FEL laser using a beam director with a diameter of more than 1 meter (more than about 39 inches);

It's only light folks... all the bad guys need is a big mirror!!