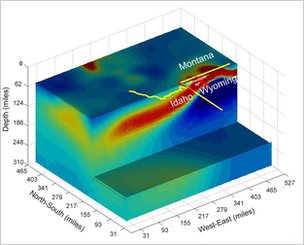 Further work using electro conductivity has hugely expanded and reshaped our understanding of the plume first imaged using seismic work.  Perhaps more correctly it is mapping the zone of influence formed by the hot plume which naturally drives fluids in the surrounding rocks generating alteration.

Henceforth geologists will want to find similar rocks exposed on surface to map the derivative effects on mineralization.

Deep drilling will also teach us a lot now that we know the effects of a super plume naturally extends far from the zone of actual maximum heat flow.

It is interesting though just how flat lying the plume zone appears to be, or perhaps this is a natural misread in which rising heat is creating a larger halo effect close to the surface.

The underground volcanic plume at Yellowstone in the may be bigger than previously thought, according to a study by geologists.

The volcanic hotspot below Yellowstone feeds the , mud pots and geysers that bring millions of visitors to the national park each year.

But the "supervolcano" has erupted violently in the distant past and could do so again at some point.

The study is set to be published in Geophysical Research Letters journal.

In 2009, researchers used seismic waves from earthquakes to build up an image of the hotspot beneath Yellowstone, which straddles the states of , and .

The authors of the latest work used variations in the electrical conductivity of rocks to produce a new picture of the plume.

This conductivity is a property of the molten silicate rocks and the hot briny water that is naturally present in them.

"It's like comparing ultrasound and MRI in the human body; they are different imaging technologies," says co-author Michael Zhdanov, a professor of geophysics at the of in .

The 2009 images, using seismic waves, showed the plume of hot and molten rock dipping downward from at an angle of 60 degrees. This plume extended 240km (150 miles) west-northwest to a point at least 660km (410 miles) under the Montana-Idaho border.

This was as far as the seismic imaging could "see".

The new study, using electrical conductivity, can only see about 320km (200 miles) below ground.

But it shows the conductive part of the plume dipping more gently, at an angle of perhaps 40 degrees to the west, and extending perhaps 640 km (400 miles) from east to west.

They may look different because the two techniques image slightly different things.

Co-author Robert B Smith, who is also at , said the plume was bigger in the geoelectric picture. He said it could be inferred that there were more fluids than shown by the seismic images.

Despite differences, he says, "this body that conducts electricity is in about the same location with similar geometry as the seismically imaged plume."

The more gentle tilt of the geoelectric plume could suggest that the hot region imaged by the seismic wave technique may be enveloped by a broader, underground envelope of partly-molten rock and liquids, the researchers say.

The most recent full-scale eruption of the supervolcano ejected some 1,000 cubic km (240 cubic miles) of hot ash and rock into the atmosphere. There have been smaller eruptions in between the largest outpourings; the most recent of these occurred 70,000 years ago.