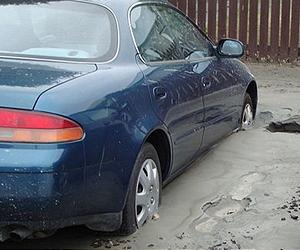 The derivative disaster has obscured the full extent of the earthquake disaster itself and the all important lessons learned.  The big lesson is that big quakes release their energy over time as happened in the big quake.  Thus movement will shake structure over an extended period which is rarely engineered for at all, even if it can be.

Way more important liquefaction damage generally means sinking and this can generally be engineered around by creating structures able to largely hold together through such an event.  Cellars do tend to act like displacement hulls and load balance is worth thinking about.  If anything, such soils also act as dampers reducing the actual applied shock.

What I find so remarkable about this event is that the direct losses due to structural collapse outside the tsunami zone appears modest which is a testament to improving codes as Japan clearly learned from Kobe and obviously rethought the engineering on their traditional structures.  We have seen the same thing happen in were upgrading old buildings has been occurring slowly but surely and will certainly save many lives when a major quake does occur.

On the other hand, people refuse to understand that land below fifty feet above high tide needs to be thought about very carefully in terms of tsunami exposure.  There are plenty of building locales with coastal views without the actual exposure.  We all saw the town that understood their exposure sufficiently to build a thirty foot retaining wall or dike.  They obviously needed to completely eliminate all building in the danger zone instead.  It has now been done for them and we hope they now do the obvious and create a memorial park in the low area.

And just how hard is it to site an ocean side nuclear power plant behind a convenient barrier island in the first place?  Why can engineers not understand that a once in a five hundred year earthquake event is a ten to one odds for a plant exposed for fifty years.  should never have been situated in an exposed bay, yet I can almost hear the presenters discounting the tsunami risk as a once in a thousand year event.

seismologists studying the earthquake and tsunami disaster in say the temblor caused significant soil "liquefaction" responsible for much damage.

The broad geographic extent of the liquefaction over hundreds of miles was surprising to experienced engineers accustomed to seeing earthquake disaster sites, including the recent events in and .

"We've seen localized examples of soil liquefaction as extreme as this before, but the distance and extent of damage in were unusually severe," said Scott Ashford, a professor of geotechnical engineering at and a member of the research team.

"Entire structures were tilted and sinking into the sediments, even while they remained intact," Ashford said. "The shifts in soil destroyed water, sewer and gas pipelines, crippling the utilities and infrastructure these communities need to function. We saw some places that sank as much as 4 feet."

Some degree of soil liquefaction, in which saturated soils, particularly sand, gravel or fill, can lose much of their strength and flow during an earthquake, is common in most incidents, an OSU release said.

However, the length of the Japanese earthquake -- almost 5 minutes -- may require a reconsideration of the extent of liquefaction damage possible in similar situations, researchers said.

"With such a long-lasting earthquake, we saw how structures that might have been OK after 30 seconds just continued to sink and tilt as the shaking continued for several more minutes," Ashford said.