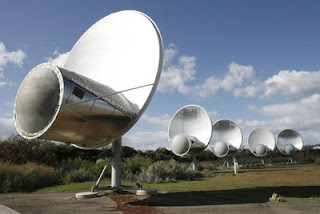 I am sympathetic to this program, but I also would be extremely surprised to actually see success.  I simply think we know enough even now to communicate without broadcasting in the electromagnetic spectrum.  Successful quantum entanglement almost begs that interpretation even if you have to walk one side of the entanglement across the intervening gap and even if the information flow is at light speed.  Broadcasting is then meaningless as an option and that is the underlying assumption of SETI.

Thus having it shut down is a loss of data only for the data’s sake.

There is also still plenty of data to process, and I am sure we will not catch up on it soon.

On the other hand, I suspect a new funder will be at the table as this work is at least popular.

If E.T. phones Earth, he'll get a "disconnect" signal. 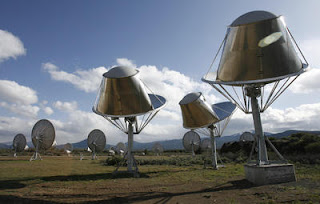 Lacking the money to pay its operating expenses, Mountain View's SETI Institute has pulled the plug on the renowned Allen Telescope Array, a field of radio dishes that scan the skies for signals from extraterrestrial civilizations.

In an April 22 letter to donors, SETI Institute CEO Tom Pierson said that last week the array was put into "hibernation," safe but nonfunctioning, because of inadequate government support.

The timing couldn't be worse, say SETI scientists. After millenniums of musings, this spring astronomers announced that 1,235 new possible planets had been observed by Kepler, a telescope on a space satellite. They predict that dozens of these planets will be Earth-sized -- and some will be in the "habitable zone," where the temperatures are just right for liquid water, a prerequisite of life as we know it.

"There is a huge irony," said SETI Director Jill Tarter, "that a time when we discover so many planets to look at, we don't have the operating funds to listen."

SETI senior astronomer Seth Shostak compared the project's suspension to "the Niña, Pinta and being put into dry dock. "... This is about exploration, and we want to keep the thing operational. It's no good to have it sit idle.

"We have the radio antennae up, but we can't run them without operating funds," he added. "Honestly, if everybody contributed just 3 extra cents on their 1040 tax forms, we could find out if we have cosmic company."

The SETI Institute's mission is to explore the origin, nature and prevalence of life in the universe. This is a profound search, it believes, because it explains our place among the stars.

The program, located on U.S. Forest Service land near Mount Lassen, uses telescopes to listen for anything out of the ordinary -- a numerical sequence of "beeps," say, or crackly dialogue from an alien version of a disembodied "Charlie" talking to his "Angels." The entire program was set up to prove what once seemed unthinkable: In the universe, we are not alone.

But funding for SETI has long been a headache for E.T.-seekers. NASA bankrolled some early projects, but in 1994, Sen. Richard Bryan of Nevada convinced Congress that it wasn't worth the cost, calling it the "Great Martian Chase" and complaining that not a single flying saucer had applied for FAA approval.

However, successful private funding came from donors such as Microsoft co-founder Paul Allen, allowing SETI to raise $50 million to build the 42 dishes.

Plans called for construction of 350 individual radio antennas, all working

in concert. But what's lacking now is funding to support the day-to-day costs of running the dishes.

This is the responsibility of UC Berkeley's Radio Astronomy Laboratory, but one of the university's major funders, the National Science Foundation, supplied only one-tenth its previous support. Meanwhile, the state of has also cut funding.

About $5 million is needed over the next two years, according to Tarter. She hopes the Air Force will help, because the array can be used to track satellite-threatening debris in space. But budgets are tight there as well.

The Allen array is not the only radio telescope facility that can be used for SETI searches. But it is the best; elsewhere, scientists have to borrow time on other telescopes.
Meanwhile, other SETI projects will continue, such as the "setiQuest Explorer" (www.setiquest.org), an application that allows citizen scientist volunteers to look for patterns from existing data that might have been missed by existing algorithms. Through a new partnership with "Galaxy Zoo" (www.galaxyzoo.org), this project runs in real time, so discoveries can be followed up on immediately.

Bay Area astronomers mourned the hiatus of the SETI program and expressed concern about the future.

Rob Hawley of the Astronomical Society called it "unfortunate. The Allen scope was a wonderful experiment. "... Hubble gets all the press, but there are lots of limitations."

Amateur astronomer Sarah Wiehe of said, "just knowing SETI is there was significant for us. This is a setback."

"If we miss a distant signal," she added, "it would be a terrible loss."

SETI's mission to explore the prevalence of life in the universe, including about 1,235 possible planets recently discovered, is compromised, according to scientists.

The program needs about $5 million over the next two years to support the telescope facility.

To learn more about SETI and its programs, go to www.seti.org.