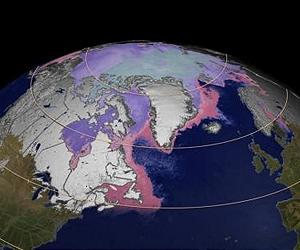 This year we were treated to an excellent example, yet this begs the next question.  Why do we see so much actual variation from year to year?  I do not think enough actual variation exists in the itself to matter much.

Certainly continental weather can be drawn into the Northeast.  Yet the effect practically disappeared fro a couple of years.

Add this to your kitbag of weather theory and know it will never be enough.

http://www.terradaily.com/reports/Warm_Water_Causes_Extra_Cold_Winters_In_Northeastern_North_America_And_Northeastern_Asia_999.html
If you're sitting on a bench in 's Central Park in winter, you're probably freezing. After all, the average temperature in January is 32 degrees Fahrenheit. But if you were just across the pond in , , which shares 's latitude, you'd be much warmer-the average temperature is a balmy 48 degrees Fahrenheit.

Researchers at the California Institute of Technology (Caltech) have now found a mechanism that helps explain these chillier winters-and the culprit is warm water off the eastern coasts of these continents.

Schneider and Yohai Kaspi, a postdoctoral fellow at Caltech, describe their work in a paper published in the March 31 issue of the journal Nature.

Using computer simulations of the atmosphere, the researchers found that the warm water off an eastern coast will heat the air above it and lead to the formation of atmospheric waves, drawing cold air from the northern polar region. The cold air forms a plume just to the west of the warm water.

In the case of the Atlantic Ocean, this means the frigid air ends up right over the northeastern and eastern .

For decades, the conventional explanation for the cross-oceanic temperature difference was that the Gulf Stream delivers warm water from the Gulf of Mexico to northern . But in 2002, research showed that ocean currents aren't capable of transporting that much heat, instead contributing only up to 10 percent of the warming.

Kaspi's and Schneider's work reveals a mechanism that helps create a temperature contrast not by warming Europe, but by cooling the eastern . Surprisingly, it's the that causes this cooling.

In the northern hemisphere, the subtropical ocean currents circulate in a clockwise direction, bringing an influx of warm water from low latitudes into the western part of the ocean. These warm waters heat the air above it.

"It's not that the warm Gulf Stream waters substantially heat up ," Kaspi says. "But the existence of the Gulf Stream near the coast is causing the cooling of the northeastern ."

The researchers' computer model simulates a simplified, ocean-covered Earth with a warm region to mimic the coastal reservoir of warm water in the . The simulations show that such a warm spot produces so-called Rossby waves.

Generally speaking, Rossby waves are large atmospheric waves-with wavelengths that stretch for more than 1,000 miles. They form when the path of moving air is deflected due to Earth's rotation, a phenomenon known as the Coriolis effect. In a way similar to how gravity is the force that produces water waves on the surface of a pond, the Coriolis force is responsible for Rossby waves.

To the east of the warm region, the air swirls in the counterclockwise direction. These motions draw in cold air from the north, balancing the heating over the warm ocean waters.

To gain insight into the mechanisms that control the atmospheric dynamics, the researchers speed up Earth's rotation in the simulations. In those cases, the plume of cold air gets bigger-which is consistent with it being a stationary Rossby-wave plume. Most other atmospheric features would get smaller if the planet were to spin faster.

Although it's long been known that a heat source could produce Rossby waves, which can then form plumes, this is the first time anyone has shown how the mechanism causes cooling that extends west of the heat source. According to the researchers, the cooling effect could account for 30 to 50 percent of the temperature difference across oceans.

This process also explains why the cold region is just as big for both North America and , despite the continents being so different in topography and size.

The Rossby-wave induced cooling depends on heating air over warm ocean water. Since the warm currents along western ocean boundaries in both the Pacific and are similar, the resulting cold region to their west would be similar as well.

The next step, Schneider says, is to build simulations that more realistically reflect what happens on Earth. Future simulations would incorporate more complex features like continents and cloud feedbacks.

The research described in the Nature paper, "Winter cold of eastern continental boundaries induced by warm ocean waters," was funded by the NOAA Climate and Global Change Postdoctoral Fellowship, administrated by the University Corporation for Atmospheric Research; a David and Lucille Packard Fellowship; and the National Science Foundation.
Posted by arclein at 12:01 AM