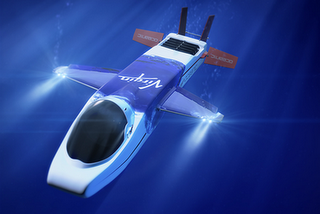 The only thing preventing this from having been accomplished in the past was the lack of a compelling reason and the cost of course.  Sir Richard has decided to take up the challenge and will get us the necessary hardware.

This should soon provide us a steady stream of deep sea information from the deep which I suspect holds a lot of surprises for us.

It is poorly understood that we have barely penetrated much below ocean contact with the deep.  This will give us the means to do so.

With the right hardware, it will still be a lot easier than space ever will be and we now are well equipped in taking our environment with us.  This could turn out to be very exciting.

Richard Branson has unveiled a Hawkes submarine that will go the bottom of 5 oceans. The company believes that it will set as many as 30 world records with each dive being the world’s first solo dive to the bottom of the five deepest trenches in the world. Branson also said he plans to create a larger submarine that can hold more people and offer trips to tourists for a sizable fee.
The Virgin Oceanic submarine represents a transformational technological advance in submarine economics and performance. The submarine provides the currently unequalled capability to take humans to any depth in the oceans and to truly explore. It utilises the latest in composite technology and a completely unique flying wing to literally fly within the Ocean environment; creatures living here such as dolphins, whales and rays have shown us this winged approach is the best and most elegant way to range the seas. The submarine is many times less expensive to manufacture and operate than any of its less capable counterparts and is in harmony with its environment.


The submarine was originally commissioned by Sir Richard’s close friend and fellow adventurer Steve Fossett who had intended to complete the first solo dive to the depths of the Mariana Trench. Sir Richard intends to finish what his friend started and then go on to help explore and unlock the wonders of the Oceans still unknown to humankind or science.

The vehicle is a unique design made from 8,000 pounds of carbon fibre and titanium. The pressure at the bottom of the deepest trench is over 1,000 atmospheres – the quartz dome alone is under 13 million pounds of pressure, the weight of three space shuttles.


Designed by Graham Hawkes, it is the only piloted craft in existence that has ‘full ocean depth’ capability. The one person sub has an operating depth of 37,000ft (7 miles) and is capable of operating for 24hrs unaided. Once fully descended, the submarine’s hydroplanes (the equivalent of wings for submarines) and thrusters will allow it to ‘fly’ up to 10km over the ocean floor whilst collecting video and data, something submersibles could only dream of.


At these depths, each individual part of the sub must be able to withstand enormous pressures, 1500 times that of an aeroplane, and protect its pilot from the extreme conditions just inches away. As Sir Richard and Chris each pilot the sub to the bottom of our planet, they will be aware that should anything go wrong, there is no rescue team that can reach them; whilst backed up by a mission crew, once at depth, the pilot and craft are alone. Full pressure testing will be conducted over the next three months.


The craft will cruise at a max of 3 knots and can dive 350ft per minute. At that speed, a dive to the bottom of the Marianna trench and back is estimated to take about five hours.


The carbon fiber and titanium craft will be capable of cruising for about 6.2 miles (10 kilometers) and can stay down unaided for 24 hours. The sub and its accompanying catamaran cost an estimated $17 million.
Branson said his so-called Virgin Oceanic expedition will have a scientific and educational purpose. He hopes the voyages will help to educate the public about mankind's impacts on the world's oceans and marine life.


He is partnering with Scripps Institution of Oceanography in San Diego, Monterey Bay Aquarium Research Institute and Moss Landing Marine Labs in Northern California as well as other research institutions. Scientists hope to study the tectonic plates and eventually use lander vehicles to bring back water, microbes and possibly small creatures from the ocean depths.


"We have 800 pounds of moon rocks and not one drop from the bottom of the ocean," said Alex Tai, Virgin Group director of special projects.


The dives will be dangerous and the pilots will likely be down in the dark and cold ocean depths for hours will little communication with the outside world. Rescues will be impossible, Welsh said. Still, he was clearly more excited than wary of the prospect, saying there is a magic to exploring new places.


"It's like going to the moon and having the lunar rover to explore around," Welsh said.


The dives also will be recorded and uploaded to Google Earth, said John Hanke, the Internet search engine's vice president of product management.


"Our mission for Google Earth is to create an interactive virtual globe and enable users to visit places that they've never explored, including the world's oceans," he said.


The submarine originally was commissioned by Branson's close friend and fellow adventurer Steve Fossett, who died in 2007 while flying a plane over the . Fossett had intended to complete the first solo dive to the Mariana Trench, Branson said.


Last year he unveiled a three-person submarine called the Necker Nymph, which is available for $2,500 a day for guests of his private resort in the . The submarine, created by San Francisco-based Technologies, is capable of going almost 100 feet deep. In a subsequent interview with Popular Mechanics, Hawkes officials said they were also working with Branson on submersibles capable of high-speed deep sea travel.