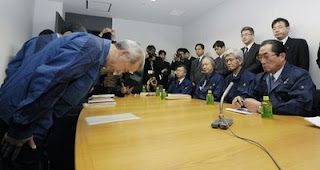 No we are not out of the woods yet.  The leak caused by a crack had to be found and plugged.  In the meantime water is been thrown at overheated reactors.  What we are not seeing are fuel rods been recovered.  Skip the slagged parts which we all know will be as difficult as TMI was, but let us get the working rods pulled and secured.  This reduces potential risk from a serious explosion.

Without a working cooling system the system is plausibly unable to cool at all now.  Thus extracting the fuel itself may well be the only way to shut the thing down.

What is true is that with the leak plugged, the situation is at least stable for now.  Perhaps they have a little breathing room to put together a decommissioning plan.  Certainly retracting the fuel rods must be a priority.  The wreaked sections will likely need special equipment fabricated to order and this will take time.

– After notching a rare victory by stopping highly radioactive water from flowing into the Pacific on Wednesday, workers at 's flooded nuclear power complex turned to their next task: injecting nitrogen to prevent more hydrogen explosions.

Nuclear officials said there was no immediate threat of explosions like the three that rocked the Dai-ichi plant not long after a massive tsunami hit on March 11, but their plans are a reminder of how much work remains to stabilize the complex.

Workers are racing to cool down the plant's reactors, which have been overheating since power was knocked out by the 9.0-magnitude earthquake and tsunami that killed as many as 25,000 people and destroyed hundreds of miles of coastline.

Unable to restore normal cooling systems because water has damaged them and radioactivity has made conditions dangerous, workers have resorted to pumping water into the reactors and letting it gush wherever it can.

Superheated fuel rods can pull explosive hydrogen from cooling water, so now that more water is going into the reactors, the concern is that hydrogen levels are rising.

Technicians began pumping nitrogen into an area around one of the plant's six reactors at 1:31 a.m. Thursday (1631 Wednesday GMT; 12:31 p.m. Wednesday EDT) to counteract the hydrogen, said Makoto Watanabe, a spokesman for 's Nuclear and Industrial Safety Agency. They want to prevent hydrogen explosions that could spew radiation and damage the reactors.

The nitrogen pumping also has risks, but the nuclear agency approved it as a necessary measure to avoid danger, spokesman Hidehiko Nishiyama said. The injection could release radioactive vapor into the environment, but residents within 12 miles (20 kilometers) of the plant have been evacuated.

The government said Wednesday it might consider expanding that zone, though not because of the nitrogen injection. An expansion might not necessarily mean the radiation that has been spewing into the air and water from the plant is getting worse. The effects of radiation are determined by both the strength of the dose and the length of exposure, so the concern is that people farther away might start being affected as the crisis drags on.

"I would imagine residents in areas facing a possibility for long-term exposure are extremely worried," Chief Cabinet Secretary Yukio Edano said. "We are currently consulting with experts so that we can come up with a clear safety standard."

Edano did not say how far the zone might be expanded or how many people might be affected. Tens of thousands have been living in shelters since the tsunami, either because they lost their homes or are in the evacuation zone or both.

Police in hard-hit prefecture prepared to launch a full-scale search for bodies in the evacuation zone Thursday. Nearly 250 agents from the Metropolitan Police will join local police searching for 4,200 people still missing there.

At the plant, 140 miles (220 kilometers) northeast of , workers finally halted the leak of highly contaminated water that raised worry about the safety of seafood caught off the coast.

But even that rare good news came with a caveat. Highly contaminated water pooling around the plant has often made it difficult or impossible for workers to access some areas because of concerns about radiation exposure. Now that the leak has stopped, the pooling could actually get worse because water that had been going into the ocean could back up onto the grounds of the complex.

When water was still leaking into the ocean, officials said it would quickly dissipate in the vast Pacific, but the mere suggestion that seafood could be at risk stirred worries throughout 's fishing industry. Water with lower levels of radioactivity is also being dumped into the sea to make room to store other water with higher levels of contamination on the plant grounds.

In the coastal town of , Takeyoshi Chiba, who runs the town's wholesale market, warily watched developments at the plant, about 120 miles (200 kilometers) down the coast.

"There is a chance that the water from will come here," he said, explaining that area fishermen still haven't managed to get out to sea again after the tsunami destroyed nearly all of their boats. "If decides to ban purchases from here, we're out of business."

This week, the government set its first-ever standard for the amount of radiation allowed in fish after levels in waters near the plant measured several million times the legal limit and elevated levels were found in some fish. The standard is the same as one already in place for vegetables.

Stopping the leak by injecting several chemicals into the area around it seemed to help cut down on radiation. By afternoon, radiation at a point 360 yards (330 meters) off the coast was 280 times the legal limit, down from a high of more than 4,000, although Edano said plant operator Tokyo Electric Power Co. was still watching closely.