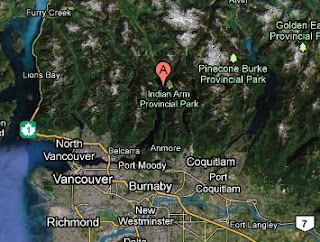 There are many excellent Sasquatch reports, hundreds in fact adding up to several thousands over the past decades.  This one is important because it adds new information and it is local for me.  I know the country.

The mountains directly north of are covered with some of the most impenetrable forests anywhere and most is true wilderness the instant you get a hundred yards in.  A compass march of a single mile is often simply impossible and usually takes hours climbing over ill placed deadfalls of trunks ten feet thick (I have done it).  It is truly tough country that channels game to long established pathways and runs.


I should mention that Indian Arm is a branch of the fiord that includes Burrard Inlet which is Vancouver's main Harbor.  Limited road access exists into it and it is normally accessed by boat.

Here a witness is able to observe a Sasquatch at close quarters crossing a creek bed (likely flat stones near the sea) that also chooses to stop and observe them.

The witness made some clear observations about the nature of the creature’s hair which is very welcome.  It obviously is sporting its summer coat that would be quite like a dog.  We confirm that the face is also covered in the same way and no beard is mentioned at all suggesting nothing unusual or human like there.

Again the creature moves in a walking stride similar to human locomotion and its face also appears human like. We do not have a muzzle which is an unusual alteration for a primate linage and shared only with humans. In fact it is the lack of a muzzle which makes the face so human like.

The way it strode across the creek bed speaks to this creature not been a human out getting his jollies.  It was too way too close at 12 meters to be pulled off anyway.  The witness really had a good look see. That is also why it was caught by surprise. You have to keep your eyes on the rocks if you plan to bound across them.

Again hundreds of reports exist but this joins the few that delivers new information and insight also. 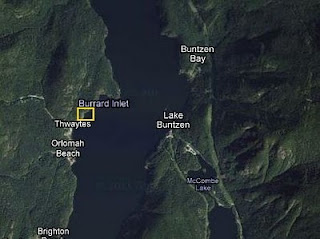 Sasquatch Encounter Leaves Lasting Memory
Posted: 29 Mar 2011 09:49 AM PDT
By Chris Bush - Nanaimo News Bulletin - One of my co-workers asked me, jokingly, if I saw any sasquatches on my recent holidays.


A few of us in the newsroom are mountain bikers and encounter the occasional deer and bear on our wilderness excursions.


They scurry off at the sight of creatures with shiny, coloured heads that ride on animals with round black hooves by grabbing their antlers and rapidly kicking the enslaved beasts.

When you ride by yourself and stop for a drink and a snack you sometimes get that eerie feeling someone or something is watching you.


I’ve never seen a sasquatch on the Island – I guess most other people haven’t either – but, a bunch of us kids were pretty sure that’s we saw one night at summer camp many years ago.


Camp activities involved a lot of swimming, hiking, archery and verbally and physically bullying each other to establish the pecking orders in our cabins.


One afternoon we hiked into the bush to camp overnight in a wide dry creek bed. As it got dark, kids hunkered down in the rocks for the night. I found a comfortable spot in the boulders.

Some boys caught little lizards that ran around in the rocks. Occasionally a kid would let out a yelp when his new pet bit him.


We were settling down when we heard something trucking through the woods, snapping branches as it went, seemingly unconcerned about the noise it made. A bear maybe?


The last of the twilight was fading, but the moon was full, so there was plenty of light to see by. What walked out of the woods was no bear.


It was about 12 metres from us, not just walking upright, but taking big easy strides across the rocks. About halfway across the creek bed it stopped, as if it realized suddenly that we were there, and turned to look at us.


It was nearly two metres tall and its body was proportioned just like a large man’s, except its forearms were a little longer than ours, so its hands hung closer to its knees.


It's body was covered in hair, but it was so fine, almost like an Irish setter’s, that you could see its muscle definition underneath. I remember his forearm muscles being clearly defined and, yup, “it” was definitely a “he”. 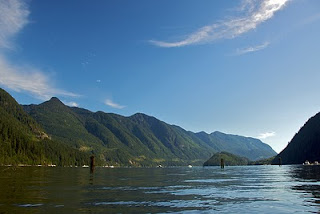 He just stood there and sort of regarded us for a moment as we gaped back in stunned silence. His face appeared human and was covered in an even finer layer of hair. His eyes were a medium shade and when I looked in them I remember thinking, “That’s a man.”

Then he turned and continued on his way. The sound of branches snapping started again when he entered the woods and eventually faded into the distance.


The encounter didn’t frighten me. I was simply amazed. Our silence broke when a few terrified kids started freaking out and crying.


We ran to our counsellors’ campsite in wooded area not far down the creek to tell them what happened. They were just teenagers themselves, and were sitting around a campfire talking and playing guitars. They just told us to get lost.


In the morning we found a narrow trail paralleling the creek bed and saw branches snapped off the trees about shoulder height of the creature. The counsellors found this a bit strange, but figured it must have been a bear.


I’ve seen films on TV and heard sensational stories about sasquatches over the years, but none of those have ever described anything like what we saw that night.

Thanks for great information you write it very clean. I am very lucky to get this tips from you.