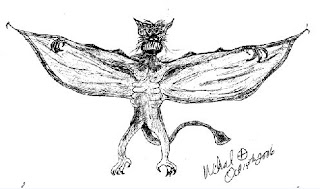 We have finally received a proper eye witness report in good conditions and over enough time for the witness to gather plenty of information from which to make a drawing, confirming an excellent visual skill in the witness.  We got lucky.

This is exactly the creature that I have been looking for.  Partial data from Puerto Rica and elsewhere including clearly pointed to the reality of this unusual bat family member and that its diet consists of blood mostly from large herbivores such as cattle.

It is obviously the model for the depictions of the gargoyle in .

As an aside, the Mothman is more likely an unusually large owl family member that hunts rabbits at night and roosts in old growth Eastern forests.

We presently have a handful of additional reports from startled witnesses, usually in conjunction with a kill attempt.

It appears from this report that the creature was on the road and leapt into the air in fright to escape while emitting a sharp scream that induced vomiting.  This is noteworthy, and suggests sub vocal frequencies that trigger the vomiting.  It is a great defense mechanism.

Prior reports were simply not definitive, while this certainly is.  Other local reports about a scaly reptilian animal doing the same thing may be of the same creature and this report implies the possibility although it was seen from its underside were scales would not necessarily be.

All in, we have related creatures to compare and this is plausibly very odd if it is scaly instead of furry.  Yet this creature took a fright and a coat of fur should have been at full extension and been seen.

So scaly is plausible but wreaks the bat line hypothesis. Wet we do have strange creatures out there that do such tricks.

The state of has become a particular area of concentration for me, thanks to Linda Godfrey's continued cryptid investigations and the submissions by the fantastic readers at 'Phantoms and Monsters'. The following accounts describe another strange creature from :


This encounter happened on Tuesday, Sept. 26, 2006, on Briggs Road near LaCrosse, Wisconsin around 9:30 pm to a 53-year old resident who prefers to be known only by his Cherokee name, Wohali, and the man's 25-year old son. The creature they encountered was 6-7 feet tall with batlike, leathery wings with a span of 10-12 feet, long claws on it's feet and hands and a snarling expression on the face. It flew towards their windshield, stared at them and then swooped upwards into the night sky.


The creature "screamed" at them before sailing straight up into the air. Wohali stated that he did not know whether the creature had been on the road and then bounced up at them, or if it had been flying at the time it came at their car. He was sure the thing was a physical, actual creature, he said, but like nothing he had ever seen before. Their reaction? Immediate illness. In seconds, both became physically ill, and the son, who was driving, swerved and then pulled the truck over into the ditch so he could vomit. The son, who wishes his identity kept private, vomited six or seven times. Wohali retched, as well, and both remained sick for an entire week. The son was so frightened by the encounter that he refuses to discuss it. But Wohali told me he feels it's important for people to "know what is out there."


Wohali also described seeing "distended ribs, long sort of human legs with claws, huge bat-like wings with 'arms' sort of attached, I remember the teeth and the scream we heard was terrifying."

Wohali’s account and his sincerity convinced Godfrey that he had a “credible sighting” of something she has not heard described before. “He certainly has nothing to gain by making it up” — or talking about it, she said. “He believes the more he talks about it, the more power it gives the creature.”


Godfrey said she feels it is important that somebody record these experiences. The Man Bat of ranks right up there as far as notable weird experiences.

“I do think this sighting that Wohali had is an extremely interesting and exciting sighting,” Godfrey said. “I do think it should have some serious consideration given to it.”

There was another similar entity reported when a man and boy were searching for a lost dog. "They saw what they described as a 'lizard man' covered in brownish scales and very reptilian-looking. It did not have its mouth open or arms extended". Around the same time, a state DNR warden and separately, a group of highway workers saw what they described as a 'reptile man' on Hwy. 13 near . It also possessed wings and was able to fly out of their view. The spot was very near the which winds up from LaCrosse!"