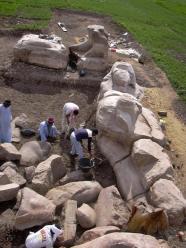 This is a reminder that continues to be an archeologist’s dream. The early work conducted over the past two centuries was often best described as reconnaissance.  What is now underway is the systematic reconstruction of past glories, however constrained by burial customs.

I would love to see all such great monuments fully reconstructed by a process of dismantlement, replacement and reassembly.  This has been partially done for the Parthenon and could largely be done today on almost anything.  I believe it is a worthy completion of many such archeological endeavors that would be enthusiastically supported.

Doing this in is at least plausible.  The Great Pyramid is the easiest and the obvious candidate, but after that there are many others from many other dynastic periods that are well worth doing.

At present archeology considers such to be sacrilege, but I expect this to soften as we winkle less and less information out of the present methodology.

CAIRO (AP) — Archaeologists unearthed one of the largest statues found to date of a powerful ancient Egyptian pharaoh at his mortuary temple in the southern city of Luxor, the country's antiquities authority announced Tuesday.

The 13 meter (42 foot) tall statue of Amenhotep III was one of a pair that flanked the northern entrance to the grand funerary temple on the west bank of the Nile that is currently the focus of a major excavation.

The statue consists of seven large quartzite blocks and still lacks a head and was actually first discovered in the 1928 and then rehidden, according to the press release from the country's antiquities authority. Archaeologists expect to find its twin in the next digging season.

Excavation supervisor Abdel-Ghaffar Wagdi said two other statues were also unearthed, one of the god Thoth with a baboon's head and a six foot (1.85 meter) tall one of the lion-headed goddess Sekhmet.

Archaeologists working on the temple over the past few years have issued a flood of announcements about new discoveries of statues. The 3,400-year-old temple is one of the largest on the west bank of the Nile in , where the powerful pharaohs of 's built their tombs.

Amenhotep III, who was the grandfather of the famed boy-pharaoh Tutankhamun, ruled in the 14th century B.C. at the height of Egypt's New Kingdom and presided over a vast empire stretching from Nubia in the south to Syria in the north.

The pharaoh's temple was largely destroyed, possibly by floods, and little remains of its walls. It was also devastated by an earthquake in 27 B.C. But archaeologists have been able to unearth a wealth of artifacts and statuary in the buried ruins, including two statues of Amenhotep made of black granite found at the site in March 2009.

Exactly who is paying for this work.. what does it do for tomorrows children?? This does nothing in any productive way, except make some money for those who will eventually sell the pieces.. If it is done with taxpayer money, whatever country, it is doing nothing.