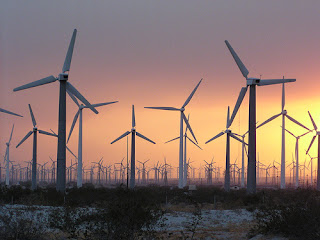 The problem with wind power is storage and the problem with storage is line loss.  We have forgotten that the legacy grid system overcame both by overbuilding in the first place.  It is naturally difficult to plug potentially intermittent energy into a power plant system that simply cannot shift loads easily.

So we come back to a presently artificial allocation system that simply cannot optimize wind at all.

The real solution is about to happen.  We now have thin superconducting cable and the cost will drop quickly until it is possible to drain all the power into a super grid that is able to actually allocate efficiently and with negligible line loss.  All of a sudden we will go from a national grid that uses possibly less than half of the energy produced to one that is able to use nearly ninety percent of it.

However it is built out, and the process is only beginning and is not unlike the build out of the fiber optic revolution in the early eighties that in twenty years went to overbuilt status.

During that same time period, wind power will continue on a tear as will geothermal power become hot at they both naturally supplant coal and nuclear with a superior product in terms of long term impact.

Without line losses to worry about, pumped storage comes into its own using superconducting motors to drive pumps.  It becomes possible to hugely increase the throughput of Niagara, if one is able to pump water back up into .

Of course the generators there will soon be replaced with superconducting generators increasing output by perhaps as much as thirty percent.

This shows us just how much flexibility superconducting systems are bringing to the power business.

Wind power: Even worse than you thought

A new analysis of wind energy supplied to the UK National Grid in recent years has shown that wind farms produce significantly less electricity than had been thought, and that they cause more problems for the Grid than had been believed.

The report (28-page PDF/944 KB) was commissioned by conservation charity the John Muir Trust and carried out by consulting engineer Stuart Young. It measured electricity actually metered as being delivered to the National Grid.

In general it tends to be assumed that a wind farm will generate an average of 30 per cent of its maximum capacity over time. However the new study shows that this is actually untrue, with the turbines measured by the Grid turning in performances which were significantly worse:

In general, then, one should assume that a wind farm will generate no more than 25 per cent of maximum capacity over time (and indeed this seems set to get worse as new super-large turbines come into service). Even over a year this will be up or down by a few per cent, making planning more difficult.

It gets worse, too, as wind power frequently drops to almost nothing. It tends to do this quite often just when demand is at its early-evening peak:

And unfortunately the average capacity over time is pulled up significantly by brief windy periods. Wind output is actually below 20 per cent of maximum most of the time; it is below 10 per cent fully one-third of the time. Wind power needs a lot of thermal backup running most of the time to keep the lights on, but it also needs that backup to go away rapidly whenever the wind blows hard, or it won't deliver even 25 per cent of capacity.

Quite often windy periods come when demand is low, as in the middle of the night. Wind power nonetheless forces its way onto the grid, as wind-farm operators make most of their money not from selling electricity but from selling the renewables obligation certificates (ROCs) which they obtain for putting power onto the grid. Companies supplying power to end users in the must obtain a certain amount of ROCs by law or pay a "buy-out" fine: as a result ROCs can be sold for money to end-use suppliers.

Thus when wind farmers have a lot of power they will actually pay to get it onto the grid if necessary in order to obtain the lucrative ROCs which provide most of their revenue, forcing all non-renewable providers out of the market. If the wind is blowing hard and demand is low, there may nonetheless be just too much wind electricity for the grid to use, and this may happen quite often:

The incidence of high wind and low demand can occur at any time of year. As connected wind capacity increases there will come a point when no more thermal plant can be constrained off to accommodate wind power. In the illustrated 30GW connected wind capacity model [as planned for by the government at the moment] this scenario occurs 78 times, or three times a month on average. This indicates the requirement for a major reassessment of how much wind capacity can be tolerated by the Grid.

Want to know why your 'leccy bill is climbing, and will keep on climbing no matter what happens to coal and gas prices? Yes - it's wind farms

Or, in other words, there is little point building more wind turbines above a certain point: after that stage, not only will they miss out on revenue by often being at low output when demand is high, but they will also miss out by producing unsaleable surplus electricity at times of low demand. The economic case for wind – already unsupportable without the ROC scheme – will become even worse, and wind will require still more government support (it already often needs large amounts above and beyond ROCs).

The idea that pumped storage will be able to compensate for absent wind – meaning that there will be no need for full thermal capacity able to meet peak demand – is also exposed as unsound. The has just 2,788 megawatts of pumped-storage capacity and it can run at that level for just five hours. national demand is above 40,000 megawatts for 15 hours a day and seldom drops below 27,000. Pumped storage would have to increase enormously both in capacity and duration – at immense cost – before it could cope even with routine lulls hitting the planned 30-gigawatt wind sector, let alone rare (but certain to occur) prolonged calms.

The John Muir analysis goes on:

The nature of wind output has been obscured by reliance on "average output" figures. Analysis of hard data from National Grid shows that wind behaves in a quite different manner from that suggested by study of average output derived from the Renewable Obligation Certificates (ROCs) record, or from wind speed records which in themselves are averaged. It is clear from this analysis that wind cannot be relied upon to provide any significant level of generation at any defined time in the future. There is an urgent need to re-evaluate the implications of reliance on wind for any significant proportion of our energy requirement.

Unfortunately given all this, the ROC scheme is on an escalator: the amount of ROCs an end-use 'leccy supplier must obtain will rise to 15.4 per cent of megawatt-hours supplied in 2014, up from 10.4 per cent last year. The effect of this is to provide the large extra funds a wind farm needs to compete with thermal generation, by driving up electricity prices for the user: The ROC scheme is a stealth tax which appears neither on the electricity bill nor the Treasury accounts.

High electricity prices worsen the case for electric transport, electric heating and electric industry, so there are reasons to dislike windfarms even from a carbon-emissions point of view. There would be little point going to partially-wind electricity if the effect is to drive people more and more into using fossil fuels wherever possible.

But that's the way we're headed. ®

You can look up all the current National Grid power figures here: archives since 2008 are here (registration required).