This is amazing stuff.  We now have a method to map cells in three dimensions.  Add different wavelengths and the field of such imaging is entering a complete new era of development and general importance.

There are bunch of images here well worth looking at.  Go for it.

This methodology will provide us a major refinement on classical results and provide images that confirm well accepted knowledge often not well pictured.  I suspect that a lot of old time frustration just got fixed. 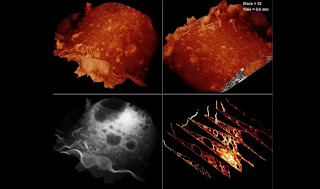 A new kind of microscope has been invented that is able to non-invasively take a three dimensional look inside living cells with stunning results (Images courtesy of Betzig, Planchon, and Gao) 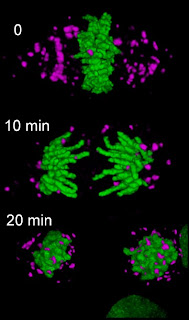 In some cases, looking at a living cell under a microscope can cause it damage or worse, can kill it. Now, a new kind of microscope has been invented by researchers from the Howard Hughes Medical Institute that is able to non-invasively take a three dimensional look inside living cells with stunning results. The device uses a thin sheet of light like that used to scan supermarket bar codes and could help biologists to achieve their goal of understanding the rules that govern molecular processes within a cell.

Veteran microscope innovator Eric Betzig says that the field of microscopy has been hindered by the fact that many techniques require cells to be killed and fixed before being viewed. Light produced by microscopes used for live-cell techniques can, in some cases, actually cause damage to the cells. The light also floods the whole area being examined, not just the small portion that's in focus – producing blur from the out-of-focus regions. 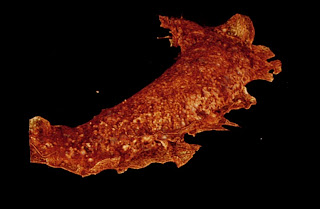 "The question was, is there a way of minimizing the amount of damage you're doing so that you can then study cells in a physiological manner while also studying them at high spatial and temporal resolution for a long time?" said Betzig. 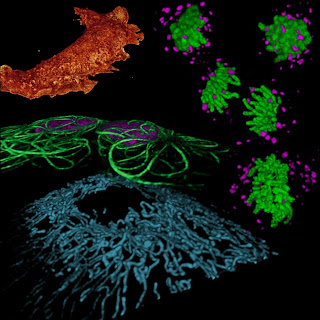 First developed around a 100 years ago, plane illumination microscopy involves shining light through the side of a sample rather than from the top. While offering some promise, Betzig's group found that the technique still exposed too much of the sample. A much thinner sheet of light was produced using by sweeping a Bessel beam – a kind of non-diffracting light beam – across the sample but the light produced by this form of plane illumination microscopy proved to be somewhat weak, making the pattern of illumination look somewhat like a bullseye.

Working with postdoctoral researchers Thomas Planchon and Liang Gao, Betzig has spent the last couple of years refining the process to try and overcome the problem. First, instead of sweeping the Bessel beam across the sample, the group rapidly switched it off and on – a method known as structured illumination. Then by concentrating the light to a narrow central part of the Bessel beam using something called two-photon microscopy, they were able to build 3D stacks of the sample at nearly 200 images per second to generate movies of processes like cell division in stunning detail. 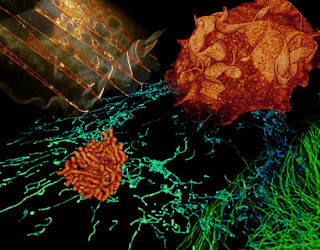 The research is described in detail in a paper entitled Rapid three-dimensional isotropic imaging of living cells using Bessel beam plane illumination, which was recently published in the journal Nature Methods. 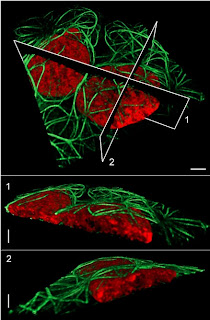