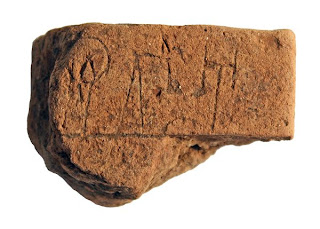 This item is important for a couple of reasons.  Firstly it establishes the Mycenaean period in as 1600 BC through 1100 BC as the presently accepted period of influence.  As I have posted extensively, this coincides with the emergence of the Atlantean sea trade imperium that operated through ‘palace’ factories throughout the .

This ‘empire’ had its capital near Gibraltar in order to control traffic into the .  It drew metals from the over at least five hundred years and likely over a full one thousand years.  Thus the of the palace culture coincides with the era of maximum activity in the and most evidence will be datable to that era.

As posted earlier, such a culture needed a written trade script.  This obviously is it.

Trade also drove the creation of a Celtic script known as Ogam which is suitable for writing on bark and wood boards.

The important take home is that:

1          Evidence keeps drifting in support of the conjecture and is actually widening the geographical scope.

2          The Atlantean ran from 1600 BC through 1159 BC and and and most other ancient foundations in the became part of the Atlantean palace culture operated primarily by European Celts.

It is actually startling just how far-flung and well established this ‘empire’ was and it compares well to the British Empire and was certainly on the same track when it collapsed in 1159 with the blast and tsunami.

Found at a site tied to myth, Greek tablet survived only by accident, experts say.

Names and numbers fill the back (pictured) of the tablet fragment, found last summer in .

Marks on a clay tablet fragment found in Greece are the oldest known decipherable text in , a new study says.

Considered "magical or mysterious" in its time, the writing survives only because a trash heap caught fire some 3,500 years ago, according to researchers.

Found in an olive grove in what's now the
The Mycenaeans—made legendary in part by Homer's Iliad, which fictionalizes their war with Troy—dominated much of Greece from about 1600 B.C. to 1100 B.C. (See "Is Troy True? The Evidence Behind Movie Myth.")

So far, excavations at Iklaina have yielded evidence of an early Mycenaean palace, giant terrace walls, murals, and a surprisingly advanced drainage system, according to dig director Michael Cosmopoulos.

But the tablet, found last summer, is the biggest surprise of the multiyear project, Cosmopoulos said.

"According to what we knew, that tablet should not have been there," the archaeologist told National Geographic News.

First, Mycenaean tablets weren't thought to have been created so early, he said. Second, "until now tablets had been found only in a handful of major palaces"—including the previous record holder, which was found among palace ruins in what was the city of .

Although the Iklaina site boasted a palace during the early Mycenaean period, by the time of the tablet, the settlement had been reduced to a satellite of the city of , seat of King Nestor, a key player in the Iliad.

"This is a rare case where archaeology meets ancient texts and Greek myths," Cosmopoulos said in a statement.

The markings on the tablet fragment—which is roughly 1 inch ( 2.5 centimeters) tall by 1.5 inches (4 centimeters) wide—are early examples of a writing system known as Linear B.

Used for a very ancient form of Greek, Linear B consisted of about 87 signs, each representing one syllable. (Related: "New Layer of Ancient Greek Writings Detected in Medieval Book.")

The Mycenaeans appear to have used Linear B to record only economic matters of interest to the ruling elite. Fittingly, the markings on the front of the Iklaina tablet appear to form a verb that relates to manufacturing, the researchers say. The back lists names alongside numbers—probably a property list.

Because these records tended to be saved for only a single fiscal year, the clay wasn't made to last, said Cosmopoulos, whose work was funded in part by the National Geographic Society's Committee for Research and Exploration. (The Society owns National Geographic News.)

"Those tablets were not baked, only dried in the sun and [were], therefore, very brittle. ... Basically someone back then threw the tablet in the pit and then burned their garbage," he said. "This fire hardened and preserved the tablet."

Not the Oldest Writing

While the Iklaina tablet is an example of the earliest writing system in Europe, other writing is much older, explained Classics professor Thomas Palaima, who wasn't involved in the study, which is to be published in the April issue of the journal Proceedings of the Archaeological Society.

For example, writings found in , Mesopotamia, and are thought to date as far back as 3,000 B.C.

Linear B itself is thought to have descended from an older, still undeciphered writing system known as Linear A. And archeologists think Linear A is related to the older hieroglyph system used by the ancient Egyptians.

Still, the Iklaina tablet is an "extraordinary find," said Palaima, an expert in Mycenaean tablets and administration at the University of Texas-Austin.

In addition to its sheer age, the artifact could provide insights about how ancient Greek kingdoms were organized and administered, he added.

For example, archaeologists previously thought such tablets were created and kept exclusively at major state capitals, or "palatial centers," such as Pylos and .

Found in the ruins of a second-tier town, the Iklaina tablet could indicate that literacy and bureaucracy during the late Mycenaean period were less centralized than previously thought.

Palaima added that the ability to read and write was extremely restricted during the Mycenaean period and was regarded by most people as "magical or mysterious."

It would be some 400 to 600 years before the written word was demystified in , as the ancient Greek alphabet overtook Linear B and eventually evolved into the 26 letters used on this page.

From Wikipedia we have the following:

Linear B is a syllabic script that was used for writing Mycenaean Greek, an early form of Greek. It pre-dated the Greek alphabet by several centuries (ca. 13th but perhaps as early as 17th century BC, see Kafkania pebble) and seems to have died out with the fall of Mycenaeancivilization. Most clay tablets inscribed in Linear B were found in Knossos, Cydonia,[1] Pylos, Thebes and Mycenae.[2] The succeeding period, known as the Greek Dark Ages, provides no evidence of the use of writing.

The script appears related to Linear A, an undeciphered earlier script used for writing the Minoan language, and the later Cypriot syllabary, which recorded Greek. Linear B consists of around 87 syllabic signs and a large repertory of semantographic signs. These ideograms or "signifying" signs stand for objects or commodities, but do not have phonetic value and are never used as word signs in writing a sentence.

The application of Linear B seems to have been confined to administrative contexts. In all the thousands of clay tablets, a relatively small number of different "hands" have been detected: 45 in Pylos (west coast of the Peloponnese, in southern Greece) and 66 in Knossos(Crete).[3] From this fact it could be thought that the script was used only by some sort of guild of professional scribes who served the central palaces. Once the palaces were destroyed, the script disappeared.