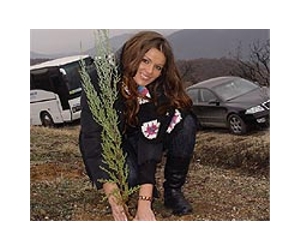 Perhaps we need to be doing more of this.  Tree planting is about man hours.  This is one way of getting them out.

We used to do Arbor Day as school children and it was used to do spring ground work.  Turning it in a giant tree planting day is a great idea.  Land owners who needed idle land planted would provide the trees as would local governments for similar applications.  The economic benefit is decades away but it is clearly real.

There is much about our environment that can be fixed by simple manpower and that is best supplied by volunteerism.

Thousands of Macedonians took a day off work on Thursday to plant three million trees to revive the nation's forests after fires ravaged an estimated 35,000 hectares (86,000 acres) of greenery.

"There is no better feeling than when you plant a tree and after some time come and see it growing," Macedonian opera singer and UNESCO Artist for Peace Boris Trajanov told reporters.

Around 30 million trees have previously been planted on more than 8,500 hectares.

"This has become a nice tradition that is not only increasing the awareness among citizens about need for protection of the environment, but is making Macedonia more green and more clean," the Interior Minister Gordana Jankuloska said as she planted a tree near the capital Skopje.

Along with human rights activists and artists, many citizens took the opportunity of a day off work as volunteers to plant the trees.

Wildfires often destroy thousands of hectares of forest in the Balkans country, mostly caused by human error, but also due to extremely high temperatures, especially in July.

Experts said that restoring the damaged ecosystem could take up to 50 years.