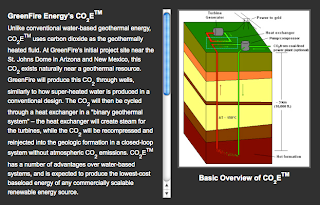 I admit that I am a bit skeptical with this protocol but it certainly solves the problems encountered with a water steam system.  The negatives can be overcome with simple volume methods and in the end; heat is transferred up to the surface and converted to brake horsepower.  Except those hot rocks are never dry and injecting water helps push presently live water into the system.

You will be dealing with steam regardless and you will be leaving salts down well.

Let us hope they know something that we do not know about this exercise that makes it a barnburner.

If the working fluid sheds heat down to ambient temperature easily, then maybe we are onto something.  The right set up would allow us to pull heat from much shallower rocks and that would be beneficial  It is possible to tap power a couple hundred feet away from molten lava, but the cost is likely to be a bitch.

Innovative Geothermal Startup Will Put Carbon Dioxide To Good Use

Just last month, GreenFire Energy began work to demonstrate a process that would use CO2 to harness geothermal energy to make electricity. What is more, the technology has the potential to add carbon sequestration – not to mention reduced water consumption – to the benefits already associated with geothermal power. The idea originally emerged several years ago from the work of geoscientist Donald Brown at the Department of Energy's Los Alamos National Lab. Karsten Preuss and others at the Department’s Lawrence Berkeley National Lab have since advanced the theory.

A basic overview of GreenFire's process to convert CO2 into electricity. | Photo courtesy of GreenFire.

Now GreenFire plans to test that theory on (and under) soil. In September 2010, the Office of Energy Efficiency and Renewable Energy’s Geothermal Technologies Program awarded GreenFire Energy a $2 million cost-share award to conduct the first field demonstration of a CO2-based geothermal system. This pilot project will rely on local geothermal resources and naturally-occurring carbon dioxide from the Dome formation near

Greenfire’s planned demonstration facility will work much like conventional geothermal power plants, which send a “geothermal fluid” – usually water – to be heated by underground rock formations and returned to the surface as steam, powering turbines that produce electricity. Instead of water, GreenFire will test CO2 as its geothermal fluid. Carbon dioxide from Dome – the product of past volcanic activity – will be tapped, pressurized to a “supercritical” state and injected underground. When this CO2 returns to the surface, it will cycle through a power conversion system, creating power. After each cycle, the CO2 will be recompressed and reinjected underground. During this process, a portion of the CO2 will be permanently trapped in porous underground rocks. Thus, the process emits no carbon – and may actually store some of it deep underground.

Getting geothermal power with CO2 instead of water would be particularly beneficial in the arid , where water is scarce. Moreover, supercritical CO2 may actually be a better geothermal fluid than water in key ways. Studies suggest that CO2 may have higher heat recovery rates, lower pumping costs due to buoyancy effects, and fewer problems with rock alteration and surface equipment problems.

Pending suitable results from geological testing that is now underway, the company is scheduled to drill its first geothermal well later this year.

Should the project demonstrate the technical and economic feasibility of this unconventional geothermal energy technology, GreenFire would ultimately look to build several 50MW geothermal plants, supplementing naturally occurring CO2 from the St. John’s Dome formation with emissions from conventional power plants in the region. Six coal-fired power plants in the area account for nearly 100 million tons of CO2 each year, much of which could be stored or channeled through the geothermal formation, sequestering emissions and generating clean, renewable energy in the process.

The Department of Energy is working with innovative startups like GreenFire Energy to provide promising technologies with the funding and support they need, ensuring that lessons learned from demonstrations like this one will help us better understand how geothermal energy and carbon sequestration can contribute to meeting long-term clean energy goals.

JoAnn Milliken is the Acting Program Manager for the Geothermal Technologies Program
Posted by arclein at 12:01 AM