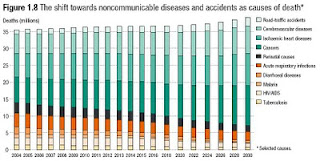 The serious point been made here is that all this is easy and cheap and really needs little more today than the simple will.

Ten years ago, the problem was overwhelming logistical issues.  Today, the cell phone has cut that Gordian knot.

With the cell phone, a responsible agency can merely fund a bounty for confirmed delivery if it is a matter of delivering live bodies.  That is cheap and direct.

All the fixes are first a matter of education and that can be done by the cell phone.  An informed consumer then drives the market.

This item identifies a host of obvious and cheap fixes.  The payoff is huge and should drive governments to make it all so.


More creativity is needed to identifying and better solve these problems. The problems can be more difficult to solve then expected on a first pass.The Economist describes how it requires some stealth to get needed micronutrients into foods that people will eat. The healthier choice needs to be in an automatic process. The solution need to just happen without resistance or dodging.


- One hundred thousand non-grid connected generators and refrigerators could help maintain the cold chain for vaccines. This would help reduce under-vaccination and save 5 million lives per year. This also has a tricky component in that many people avoid vaccination because of misinformation and incorrect beliefs.


37 million lives per year are very savable. The UN millennium projects are a good start. More creativity is needed. The problems have multiple vulnerabilities to be more deeply and creatively analyzed and exploited. The World economy could be sustainably increased several times.

Helping people/companies/governments get more creative about getting enough micronutrients to people would save millions of lives and increase intelligence and boost local and world economies. There would be direct boosting of health for lower medical costs and higher productivity and then the increased IQ would also boost economies.

If everyone had optimal levels of micronutrients then the IQ of over half of the worlds population would be increased by up to 20 IQ points. (Enough Iodine and Zinc.) Energy levels, productivity and health would also be improved. Also, preventing brain damage from pollution like lead would also help. Increased IQ provides economic benefits and reduced crime levels. It is like a massive initial "transhumanist boost" by giving half the world a 20 point IQ boost over a few decades.


Under-nutrition, including micronutrient deficiencies, accounts for up to 3.5 million maternal and child deaths annually and has life-long consequences on health, productivity and economic growth.


Public health and nutrition are correlated to per capita GDP.


Among the most severe consequences of micronutrient deficiencies are:

* 38 million newborns at risk of falling victim to iodine deficiency disorders, which cause permanent brain damage, every year

* 1.5 million child deaths from diarrhoea, which could be easily treated with zinc and oral rehydration therapy

* An estimated 250 000 to 500 000 vitamin A-deficient children become blind every year, half of them dying within 12 months of losing their sight.

I also discuss lowering deaths per TWH from energy generation


Applying air pollution control devices onto coal, oil and natural and industrial facilities and devices and checks on cars and trucks for ensuring better control of particulates could save hundreds of thousands of the 800,000-1.2 million deaths per year from particulates.

- Helping developing countries to have safe indoor stoves and heaters (there is a UN program for this but it needs to be expanded (would save 1.9 million people per year)


Improved low cost building construction would prevent the vulnerability shown in to fragile buildings. Simple and affordable steps can be taken with things like hurriquake nails

Summarizing some other steps to prevent avoidable deaths


* 6 million deaths could be avoided by stopping the use of Tobacco. (requires more creativity)

* Poor water quality continues to pose a major threat to human health. Diarrhoeal disease alone amounts to an estimated 4.1 % of the total DALY global burden of disease and is responsible for the deaths of 1.8 million people every year (WHO, 2004)

* Spend $136 billion/year on sanitation and clean water or create a cheap and effective diahrrea vaccines so that people can tolerate dirty water. Still work on clean sanitation but vaccinations could be 20 times cheaper and save 80-90% of the lives.

* 1.3 million people die each year from traffic accidents. Automation (robotic driving) even partial automation could help a great deal in reducing these deaths and injuries. Partial Automation: detection of imminent crash and auto-avoidance or reduction of crash severity (auto-brake), automation at intersections where disproportionate accidents occur. 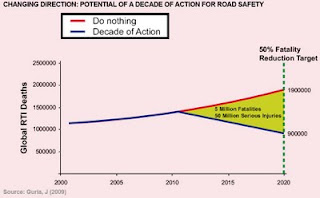 If you liked this article, please give it a quick review on ycombinator orStumbleUpon. Thanks