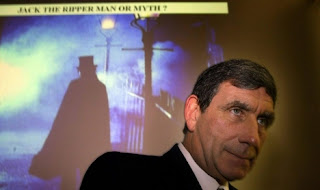 Modern methods work again and we now have a high probability suspect for the crimes committed by Jack the Ripper in the late nineteenth century that also explains time and place.

A confession is impossible, but we have at least four crimes in and that conform and with the perpetrator caught committing the one in .  It will never get much better than that it certainly explains the cessation and periodicity of activity.

This is a nasty tale and legend that has gone on far too long with far too many spurious suspects thrown into the pot.  Having a proven killer caught in the act is a good way to close the book.

Jack the Ripper was a German sailor, detective claims

They are history’s most notorious serial murders and among the world's most famous unsolved crimes.


Between August and November 1888, five prostitutes were killed and horribly mutilated in and around ’s crowded, impoverished Whitechapel area.


Mary Ann Nichols, Annie Chapman, Elizabeth Stride, Catherine Eddowes and Mary Jane Kelly had their throats slashed and – with the exception of Stride – their abdomens mutilated. Then the killings stopped abruptly. The murderer was never identified. And the Jack the Ripper phenomenon began.


In the 123 years since, countless suspects have been proposed – and rejected – from various poor Polish immigrants to Queen ’s physician William Withey Gull and even Prince Albert Victor, Duke of Clarence and Avondale.


But according to English former homicide detective Trevor Marriott, Jack the Ripper was most likely a German merchant sailor from named Carl Feigenbaum.


Marriott, author of "Jack the Ripper: The 21st Century Investigation" and "The Evil Within: The World’s Worst Serial Killers," aired his theory in this week in a ZDF documentary co-produced by National Geographic.


Marriott says he has used modern policing methods to overturn many of the old assumptions about the Ripper murders and gathered evidence that points to Feigenbaum, who was eventually convicted and executed for murdering Juliana Hoffmann in New York in 1894.


“There is a case for suggesting he might have been the first trans-continental serial killer,” Marriott says.


In 2002, the retired Bedfordshire policeman – who’d had a long-running interest in the Ripper case – decided to sift through the evidence, see what could be discounted, and determine what facts remained.


"When I looked through it, I thought, 'There are lots of things here that are not right, that are not factually correct'," he says. "The Ripper mystery is based on many wild, speculative, uncorroborated theories.'"


The police at the time believed the Ripper was a local man – and subsequent theories have generally assumed that he was at least a Londoner. But Marriot takes a novel approach, alleging that the murderer might have been a sailor.


“There were two merchant docks close to Whitechapel, and Whitechapel had hundreds of prostitutes and we all know that where seamen are, there are prostitutes as well,” he says. “It’s an area that hadn’t been explored by the police at the time back in Victorian times, so it was a totally new lead really.”


Hundreds of vessels came in and out of every day. It was a “mammoth task,” he says, but he went through thousands of shipping records and found that there was a vessel, the Reiher, that was docked on all the dates of the murders save one. On that date, another vessel from the same line was docked.


Around the same time, Marriott learned that what he calls a “Ripper-like murder” – of a woman named Juliana Hoffmann – had taken place in in 1894, six years after the five women in Whitechapel. The man convicted for that murder was German Carl Feigenbaum, who was also using aliases including Anton Zahn and Carl Zahn.


“He was bang to rights on that murder. He was arrested leaving the scene of the crime and the police found a long-bladed knife outside which was obviously attributed to him. When they searched his property, they found a kind of sheath and sharpening stone which indicates he’d been carrying it around for some time.”


Marriott’s research revealed Feigenbaum had been a merchant seaman and had worked for the Norddeutsche Line, which owned the Reiher.


“There was a strong connection there ... Once I started to widen the net, I found there was a number of unsolved, Ripper-like murders in Germany between 1889 and 1894 in addition to others in and around Whitechapel - outside of the original five women who everybody believed were the only victims, and other Ripper-like murders in and around the New York area,” he says.


He went to the archives to check crew lists for the Norddeutsche vessels – and was frustrated to discover that the key records had gone missing.


“All the other records were there, but the crew lists for this vessel that relate to the three months of the Ripper murders in the were all missing.”


However, he did find records showing that Feigenbaum had been working for the Norddeutsche Line for “many, many years,” he says.


William Sanford Lawton, the New York lawyer who defended Feigenbaum in the Hoffmann murder, later said that while on death row, Feigenbaum admitted being a pathological killer and mutilator of women. Lawton made the connection with the Ripper, conducted some inquiries and was quoted in newspapers in 1896 saying he could put Feigenbaum in Whitechapel at the times of the five murders.


“Sadly, the press never asked the $64,000 question, ‘What were those inquiries?’” Marriott says.


One possibility is that found the maritime records for the Reiher and removed them, he says.


Marriott had an advantage over other Ripper sleuths in that he started with a genuinely open mind and approached the case like any modern murder inquiry. He eliminated suspects considered “prime” and broadened the inquiry to consider others who fit the facts, he says.


This even included eliminating at least one of the five murders assumed to be the Ripper, based on the characteristics of the crimes.


“One, the murder of Elizabeth Stride, was definitely not the work of the Ripper and there are major question marks surrounding the murder of Mary Kelly as well,” he said.


Of course the debate will go on. Marriott admits that no theory is watertight, but had the police considered the merchant seaman theory, they would have come to the same conclusion as Marriott and would have been in a better position to solve the crime. Modern police would, for instance, have established a similarity with the murders and sent somebody over to interview Feigenbaum before he was executed.


He also says he has found new documentary evidence that he is still examining, and hopes that publicity in Germany may encourage descendants of Feigenbaum’s to come forward with information.

“This has always had a worldwide following and it will continue to do so,” he says.

“There’s quite a lot to suggest Feigenbaum was involved in these murders. We can’t say 100 percent. But Feigenbaum is the prime suspect for these murders because there is more evidence that points to him than to any other suspect.”

Well they haven't actually ID'ed him, have they. They're just some more speculation, just as private investigators n.y. are speculating now that the Craigslist killer could be an ex-cop. The thing is they better more fast on this guy as he seems his sort of trying to recreate the Jack the Ripper murders (he's currently on his 4th victim, all prostitutes) and there's no sign of stopping. He's also very good at hiding his tracks....so here's hoping we won't have yet another Jack the Ripper on our hands.

Hi, Thanks for the very informative post, in my research. We can not say with 100% results that he was the Jack the ripper because if we check other suspects there are also some very good relevant points so can we say at that time there are many jack the rippers. This is a mystery and it's quite hard to find out the reality.