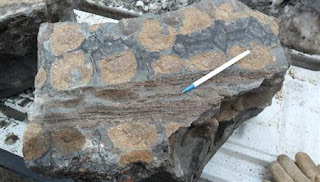 Today we celebrate another fossil discovery that appears to be extraordinary.  We believe it is a three dimensional ankylosaur protected by a casing of harder rock.  Most likely it sank directly into the ooze and was quickly fossilized.   The existence of tendons alone suggests that we may be even able to trace soft tissue forms.

One takes luck wherever one finds it and this is a very lucky find that is worth following as it is likely a throve of new knowledge.

The same mechanisms that preserve marine fossils went to work on this particular LAND critter.  We will not be finding many of these.

A series of unlikely events over a span of 113 million years has resulted in the discovery of what may be the oldest dinosaur remains in 's history.

On Monday afternoon, a shovel operator at a Suncor oilsands mine site noticed what looked like brown discs in the black rock on a small cliff he was excavating. Per Suncor's policy, operator Shawn Funk shut off his machinery and reported that he'd found something unusual.

"It was really like finding a needle in a haystack," said Suncor spokeswoman Lanette Lundquist.

The area remained closed to work while Suncor took pictures of the curious find and sent them to the in Drumheller.

There, Don Henderson, the curator of dinosaurs, thought it could be the remains of a marine reptile, not an uncommon find in an area that used to be underwater.

He thought he could see a fossilized flipper. On Tuesday, Henderson and another Tyrrell employee travelled to the site, 50 kilometres north of .

"After about 10 minutes, we realized it was something different," said. "We did a high-five."

realized the brown discs were the cross-section of a dinosaur's ribs. He could see bits of backbone, the edge of a leg and tendons thick as broom handles, all encased and protected by a mass of minerals and other material.

"This thing is in a giant lump, about 85 per cent of it is still in the hill," he said.

"This is a perfectly preserved three dimensional fossil. This is the earliest, most complete find in . This might be the best one so far."

Henderson believes the bones belong to an ankylosaur, an armoured herbivore covered in plates and spikes, with "wimpy little teeth."

When alive, it was roughly five metres long and two metres wide.

The location and structure of the find are highly unlikely. For starters, an ankylosaur was a terrestrial animal -this one ended up in an area that was 150 km from any land at the time of its death. The dinosaur likely died and was swept to sea before sinking.

The remains likely began to fossilize within days or even hours, forming a "bombproof" protective crust that lasted until Funk uncovered it.

Henderson praised Funk, who had just toured the Tyrrell last week, for his caution. A massive shovel like Funk uses could easily destroy a fossil without anyone ever knowing, said.

"This was just a series of very unlikely events," said.

Lundquist said the area of the Suncor site will remain closed until all of the fossil is excavated. A meeting will be held Monday to determine the best way to do that. Once those parts have come loose, they will be taken to Drumheller on a flatbed truck.

The bulk of the fossil is sticking out from the side of a 3.5-metre cliff. Workers will sift through the rubble below for any smaller pieces.

"This crust is very good to protect the fossil, but it will be very difficult to prepare over the next two to three years. It's worth it, though, for what we'll learn," said.

Such a complete skeleton of an ankylosaur has never been found before; it's expected to provide new scientific information as it is uncovered by tiny pneumatic drills and air-driven tools. That work will have to be careful, said, because the encasing material is harder than the bones themselves.

http://www.theprovince.com/technology/Rare+fossil+find/4511129/story.html#ixzz1HqONQA4j
Posted by arclein at 12:01 AM