CAT Scans for the Earth 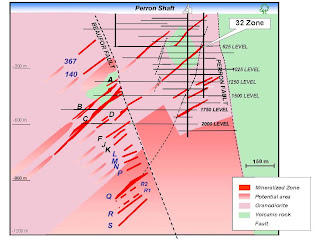 I know that the Russians did a lot of work on using muons back over thirty years ago and even got into using satellites to advance the work.  It is certainly helpful to detect density changes when exploring for minerals as most of our important minerals do form in denser deposits, but not always.

Most copper is mined from large disseminated deposits and the copper content is often as low as three to ten pounds per ton.  That sure will not show a change of density.

Massive sulphide deposits are quite another matter.  Yet they are often developed in the presence of substantial uneconomic magnetite deposits.  So none of this is a free ride at all.  Yet the ability to plausibly map density from deep underground sensors is certainly attractive.

It may well allow us to redevelop many of the old silver vein type mines were the ore is very dense.  Perhaps it can be used to give the old Comstock a second look.

CAT Scans for the Earth

Scientists Use Cosmic Rays To Develop Images of Mine Deposits.

: March 18, 2011— A based centre of excellence is advancing the development of a new mineral exploration technology that can take three-dimensional “pictures” of dense ore deposits, towards commercial application. The technology could increase the success of exploration while at the same time making it less expensive and reduce itsenvironmental impact.

Similar to medical imaging machines, the technology, initiated from the research of Dr. Douglas Bryman, J.B. Warren Chair at the University of British Columbia Department of Physics and Astronomy, is being further developed by Advanced Applied Physics Solutions (AAPS), a Centre of Excellence for Commercialization and Research (CECR), funded under the federal Networks of Centres of Excellence program. AAPS, the commercialization partner of Vancouver’s TRIUMF - Canada’s national laboratory for nuclear and particle physics - brings together academics, government and industry from across to bring Canadian innovation to market.

AAPS is commercializing muon geotomography, which relies on the detection of cosmic ray muons (highly energetic electron-like particles created in the upper atmosphere) which penetrate deep within the earth. “The underground muon sensor system is able to detect and differentiate regions of high density, from which 3D images can be created of potentially valuable ore”, explained Dr. Bryman.

The technology has been initially tested in a mine on , near , and further testing will be undertaken at a number of sites to prove its effectiveness with different types of mineral deposits. To develop and field test this specialized system and undertake these tests, as well as help industry adopt the technology, AAPS has received $1.8 million in federal project funding from Western Economic Diversification. The funding was announced yesterday by the Honourable Lynne Yelich, Minister of State for Western Economic Diversification.

“Mining is a major contributor to our resource-based economy. By investing in this project, our Government is ensuring that our key sectors develop the tools necessary to grow and provide highly-skilled jobs for Canadians,” said Minister Yelich. "Our Government will continue to do its part to help build a more globally competitive and productive mining sector.”

AAPS is completing first round proof-of-principle tests in collaboration with NVI-Breakwater at its Myra Falls mining operations on Vancouver Island, as well with TRIUMF, university partners, the Geological Survey of Canada and BC Ministry of Energy and Mines.

“The mining sector is a critical part of a competitive Canadian economy, and certainly is key to the BC economy,” said Jack Scott, President and CEO of AAPS. “We are proud that with the help of this multi-sector collaboration we are able to advance a technology that may benefit the industry. The partnership created for this project is a strong example of the work that AAPS, as a CECR was established to do”, Mr. Scott explained.

"The centres of excellence help translate leading-edge research into practical solutions for Canadians, addressing many of our country’s greatest health, environmental, social and economic challenges," said Dr. Suzanne Fortier, Chair of the Networks of Centres of Excellence (NCE) Steering Committee and President of the Natural Sciences and Engineering Research Council of Canada, “The CECR program plays an integral role in the government’s science and technology strategy for a more prosperous, advanced and competitive Canada.”

Further tests will validate that the technology can be used to explore a broad range of mineral deposits. The initial tests to identify massive sulfide deposits at are a major source of zinc, copper, lead, gold and silver. With today’s high prices for most minerals, both types of deposits are being actively explored by Canadian mining companies throughout North and South America as well as Africa and .

NVI-Breakwater spokesman Rick Sawyer lauded the new technology as a breakthrough for the industry. “Mineral exploration and mine development is an expensive and time-consuming process and anything that makes it easier and less costly is more than welcome by the industry”, said Sawyer. “Also, because this technology has the potential to detect and image deposits at depth, it will refine the exploration search area which will reduce the amount of drilling required and further efforts to minimize environmental impact.”

Advanced Applied Physics Solutions Inc. (AAPS) is a national Centre of Excellence for Commercialization and Research focused on developing and commercializing advanced physics technologies for the social and economic well-being of Canadians and people around the globe. AAPS collaborates with academic, government, and industry stakeholders to develop promising new technologies emerging from research at TRIUMF, ’s national laboratory for nuclear and particle physics research and related sciences, and other leading institutions. As a CECR, AAPS is a recipient of close to $15 million dollars in Federal Funding.