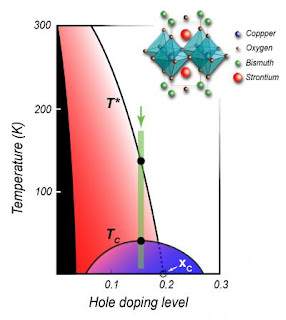 This work tips the balance for the phase shift theory and will certainly channel further work.  On top of all that, it was recently announced that we are now able to approach room temperature.  With some luck we may have a better theory to work with out of all this that allows prediction in the realm of higher temperatures.

The fact remains that we today have a palette of working materials and working engineering protocols all combining to bring superconducting into mainstream industrial applications.  It may not be throw away consumer electronics yet but we will certainly take it.

This is more good news and pertinent to the development of Magnetic Field Exclusion Vessels which will soon be a priority engineering target.. 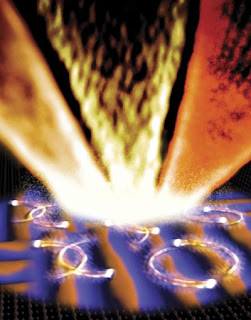 An unprecedented three-pronged study has found that one type of high-temperature superconductor may exhibit a new phase of matter. As in all superconductors, electrons pair off (bottom) to conduct electricity with no resistance when the material is cooled below a certain temperature. But in this particular copper-based superconductor, many of the electrons in the material don’t pair off; instead they form a distinct, elusive order (orange plumes) that had not been seen before. Scientists at SLAC National Accelerator Laboratory, , National Laboratory and institutions in and report their findings in the March 25 issue of Science. Credit: Greg Stewart/SLAC

(PhysOrg.com) -- Scientists from the U.S. Department of Energy's Lawrence Berkeley National Laboratory (Berkeley Lab) and the University of California at Berkeley have joined with researchers at Stanford University and the SLAC National Accelerator Laboratory to mount a three-pronged attack on one of the most obstinate puzzles in materials sciences: what is the pseudogap?

A collaboration organized by Zhi-Xun Shen, a member of the Stanford Institute for Materials and Energy Science (SIMES) at SLAC and a professor of physics at Stanford University, used three complementary experimental approaches to investigate a single material, the high-temperature superconductor Pb-Bi2201 (lead bismuth strontium lanthanum copper-oxide). Their results are the strongest evidence yet that the pseudogap phase, a mysterious electronic state peculiar to high-temperature superconductors, is not a gradual transition to superconductivity in these materials, as many have long believed.

It is in fact a distinct phase of matter.

"This is a paradigm shift in the way we understand high-temperature superconductivity," says Ruihua He, lead author with Makoto Hashimoto of the paper in the March 25 issue of the journal Science that describes the team's findings. "The involvement of an additional phase, once fully understood, might open up new possibilities for achieving superconductivity at even higher temperatures in these materials." When the research was done Hashimoto and He were members of SIMES, of Stanford's Department of Applied Physics, and of Lab's Advanced Light Source (ALS), where He is now a postdoctoral fellow.

Superconductivity is the total absence of resistance to the flow of electric current. Discovered in 1911, it was long thought to occur only in metals and only below a critical temperature (Tc) not far above absolute zero. "Ordinary" superconductivity commonly takes place at 30 kelvins (30 K) or less, equivalent to more than 400 degrees below zero Fahrenheit. Awkward as reaching such low temperatures may be, ordinary superconductivity is widely exploited in industry, health, and science.

In this phase diagram common to many cuprate superconductors, the insulating phase typical of undoped cuprate compounds appears at the far left (black). Other phases appear with increased hole doping -- the dome-shaped superconducting phase below Tc (blue), the mysterious pseudogap below T* (red), and a “normal metallic” phase (white). New evidence from studies of Bi2201 (crystal structure inset) along the temperature range shown in greeen strongly supports the idea that the pseudogap is in fact a distinct phase of matter that persists into the superconducting phase. If so the T* phase transition must terminate in a quantum critical point (Xc) at zero temperature. Credit: Ruihua He, Lawrence National Laboratory

In all known superconductors electrons join in pairs (Cooper pairs) to move in correlated fashion through the material. It takes a certain amount of energy to break Cooper pairs apart; in ordinary superconductors, the absence of single-electron states below this energy constitutes a superconducting gap, which vanishes when the temperature rises above Tc. Once in the normal state the electrons revert to unpaired, uncorrelated behavior.

Not so for cuprate superconductors. A similar superconducting gap exists below Tc, but when superconductivity ceases at Tc the gap doesn't close. A "pseudogap" persists and doesn't go away until the material reaches a higher temperature, designated T* (T-star). The existence of a pseudogap in the normal state is itself anything but normal; its nature has been heatedly debated ever since it was identified in cuprates more than 15 years ago.

Attempts to explain what's going on in the pseudogap have coalesced around two main schools of thought. Traditional thinking holds that the pseudogap represents a foreshadowing of the superconducting phase. As the temperature is lowered, first reaching T*, a few electron pairs start to form, but they are sparse and lack the long-range coherence necessary for superconductivity — they can't "talk" to one another. As the temperature continues to fall, more such pairs are formed until, upon reaching Tc, virtually all conducting electrons are paired and act in correlation; they're all talking. In this scheme, there's only a single phase transition, which occurs at Tc.

Another school of thought argues that the appearance of the pseudogap at T* is also a true phase transition. The pseudogap does not represent a smooth shift to the superconducting state but is itself a state distinct from both superconductivity and normal "metallicity" (the usual state of delocalized, uncorrelated electrons). This new phase implies the existence of a "quantum critical point" — a point along a line at zero temperature where competing phases meet. In theory, with competing phases wildly fluctuating in the neighborhood of a quantum critical point, there may be entirely new routes to superconductivity.

"Promising as the 'quantum critical' paradigm is for explaining a wide range of exotic materials, high-Tc superconductivity in cuprates has stubbornly refused to fit the mold," says Joseph Orenstein of Berkeley Lab's Materials Sciences Division, a professor in physics at UC Berkeley, whose group conducted one of the research team's three experiments. "For 20 years, the cuprates managed to conceal any evidence of a phase-transition line where the quantum critical point is supposed to be found."

In recent years, however, hints have emerged. "New ultrasensitive probes have found fingerprints of phase transitions in high-Tc materials," Orenstein says, "although there's been no smoking gun. The burning question is whether we can discover the nature of the new phase or phases."

A multipronged attack on the pseudogap

In the Stanford-Berkeley study, three groups of researchers joined forces to probe the pseudogap phase on the same sample.

"Pb-Bi2201 was chosen because, first, it is structurally simple, and second, it has a relatively wide temperature range between Tc and T*," says Ruihua He. "This permits a clean separation of any remnant effect of superconductivity from genuine pseudogap physics."

Groups led by Z.-X. Shen at beamline 5‑4 of the Stanford Synchrotron Radiation Lightsource (SSRL) at SLAC and by Zahid Hussain, ALS Division Deputy for Scientific Support, at beamline 10.0.1 of Berkeley Lab's ALS, studied the sample with angle-resolved photoemission spectroscopy (ARPES). In ARPES, a beam of x-rays directed at the sample surface excites the emission of valence electrons. By monitoring the kinetic energy and momentum of the emitted electrons over a wide temperature range the researchers map out the material's low-energy electronic band structure, which determines much of its electrical and magnetic properties.

At Stanford, researchers led by Aharon Kapitulnik of SIMES, a professor in applied physics at , studied the same crystal of Pb-Bi2201 with the magneto-optical Kerr effect. In light reflected from the sample under a zero magnetic field, tiny rotations of the plane of polarization are measured as the temperature changes. The rotations are proportional to the net magnetization of the sample at different temperatures.

Finally, Orenstein's group at applied time-resolved reflectivity to the sample. A pump pulse from a laser excites electrons many layers of atoms deep, temporarily affecting the sample's reflectivity. Probe pulses, timed to follow less than a trillionth of a second after the pump pulses, reveal changes in reflection at different temperatures.

All these experimental techniques had previously pointed to the possibility of a phase transition in the neighborhood of T* in different cuprate materials. But no single result was strong enough to stand alone.

ARPES experiments performed in 2010 by the same group of experimenters as in the present study revealed the abrupt opening of the pseudogap at T* in Pb-Bi2201. Variations in T* in different materials and even different samples, as well as in the surface conditions to which ARPES is sensitive, had left room for uncertainty, however.

In 2008, the Kerr effect was measured in another cuprate, also by the same group as in the present study, and showed a change in magnetization from zero to finite across T*. This was long-sought thermodynamic evidence for the existence of a phase transition at T*. But compared to the pronounced spectral change seen by ARPES, the extreme weakness of the Kerr-effect signal left doubt that the two results were connected.

Finally, since the late 1990s various experiments with time-resolved reflectivity in different cuprates have reported signals setting in near T* and increasing in strength as the temperature drops, until interrupted by the onset of a separate signal below Tc. The probe is complex and there was a lack of corroborating evidence for the same cuprates; the results did not receive wide attention.

Now the three experimental approaches have all been applied to the same material. All yielded consistent results and all point to the same conclusion: there is a phase transition at the pseudogap phase boundary – the three techniques put it precisely at T*. The electronic states dominating the pseudogap phase do not include Cooper pairs, but nevertheless intrude into the lower-lying superconducting phase and directly influence the motion of Cooper pairs in a way previously overlooked.

"Instead of pairing up, the electrons in the pseudogap phase organize themselves in some very different way," says He. "We currently don't know what exactly it is, and we don't know whether it helps superconductivity or hurts it. But we know the direction to take to move forward."

Says Orenstein, "Coming to grips with a new picture is a little like trying to steer the Titanic, but the fact that all three of these techniques point in the same direction adds to the mounting evidence for the phase change."

Hussain says the critical factor was bringing the Stanford and scientists together. "We joined forces to tackle a more complex problem than any of us had tried on our own."
Provided by National Laboratory (news : web)