Burger and Fries and Coffee Surprise 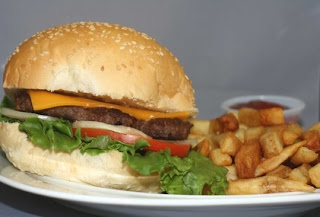 So much for using diet coke!

This is a bit unexpected and also quite surprising.  It indicates a pathway not understood before and explains the fattening capacity of fast food that relies on the deep fryer.  It also explains the negative effect of caffeine as a fat promoting system.

We already know better. Now we know why where previous arguments tended to be forgiving.  A Big Mac is bad enough, but have anything else except caffeine if you must eat it at all.

This is the first time I have come across an argument for caffeine been active in the metabolic pathway involving sugar and actually comes as a shock.

Expect dieticians and food designers to really put their thinking hats on over this one.  Huge money is involved and the past has been based on erroneous assumptions that now will be addressed.

Having a burger and fries? Skip the coffee

Next time you're craving a Big Mac or Whopper, you should skip having a coffee along with it, new Canadian research shows.

But the spike doubles after having both a fatty meal and caffeinated coffee - jumping to levels similar to those of people at risk for diabetes.

"The results tell us that saturated fat interferes with the body's ability to clear sugars from the blood and, when combined with caffeinated coffee, the impact can be even worse," Beaudoin said in a release about the study. "Having sugar remain in our blood for long periods is unhealthy because it can take a toll on our body's organs."

The study from the university was published Friday in the Journal of Nutrition.

It is the first study to examine the effects of saturated fat and caffeinated coffee on blood sugar levels using a "fat cocktail" which contains only lipids. The specially designed beverage allowed researchers to accurately mimic what happens to the body when people ingest fat.

For her researcher, Beaudoin had a group of healthy men drink one gram of the fat beverage for every kilogram of body weight for their first meal. Six hours later, they were given a second meal consisting of a sugary drink.

Typically when people ingest sugar, the body produces insulin, which takes the sugar out of the blood and distributes it to our muscles, Beaudoin said.

But the researchers found the fatty meal affected the body's ability to clear the sugar out of the blood. The participant's blood sugar levels were 32% higher than they were when the men had not ingested the fat cocktail.

The results showed blood sugar levels increased by 65% compared to what they were when participants had not ingested the fat and caffeinated coffee.

"This shows that the effects of a high-fat meal can last for hours," Beaudoin said. "What you eat for lunch can impact how your body responds to food later in the day."

She said while the results are important for everyone, people with metabolic diseases and Type 2 diabetes will benefit from the research.

She suggested drinking decaffeinated coffee is a good way to improve a person's glucose tolerance.