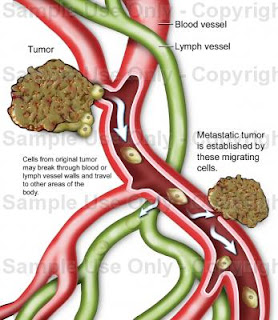 Here is some more science on the cancer front and it appears to be a way of independently evaluating the risk of metastasis of the known cancer.  This all helps tighten the clinical information available to plan treatment.

I am now seeing a rising tide of effective treatment protocols and I believe now that cancer can be cured if the science is given a free hand to finish the job.  It should switch over to a rush basis with patients been asked to sign off on methods that are timely for them but impossible for preliminary conformation in the patients lifetime.

Intercepting cancer is worth a lot of risk, even if it entails a protocol with a mere five percent success, as long as success is possible.  All protocols are usually well past that lousy threshold.

The problem is more the slow conversion onto new protocols by the research community.  A whole range of age tested herbal remedies were opposed in the Eighties, tested by university labs without industry support in the nineties and are generally understood and accepted today.  Thus a promising discovery today with no obvious pathway to patent protection is advanced far too slowly by resource strapped grad students.

I can tell you that cancer was most likely cured (MIT nanogold experiment) two years ago.  I can not tell you when if ever we can save your life.

Newswise — PHILADELPHIA — Scientists at Yale University have identified a set of plasma biomarkers that could reasonably predict the risk of metastasis among patients with melanoma, according to findings published in Clinical Cancer Research, a journal of the American Association for Cancer Research.

“The rate at which melanoma is increasing is dramatic, and there is a huge number of patients under surveillance,” said Harriet Kluger, M.D., associate professor of medicine at Yale University School of Medicine. “Our current method of surveillance includes periodic imaging, which creates huge societal costs.”

Melanoma is the fifth most common cancer in men and the seventh most common cancer in women. It is estimated that 68,130 people in the were diagnosed in 2010, and 8,700 died. With proper screening, melanoma can often be caught early enough to be removed with surgery, and mortality typically comes when the cancer metastasizes. The risk of metastasis varies from less than 10 percent for those with stage 1A melanoma, to as high as 70 percent with stage 3C.

Patients with melanoma are typically subjected to a combination of imaging tests, blood tests and physical examinations, but there is no clear consensus on how often these tests should occur or how reliable they are.

“This finding will need to be confirmed prospectively before it is used in the clinic, but it shows that such testing is possible,” said Kluger.